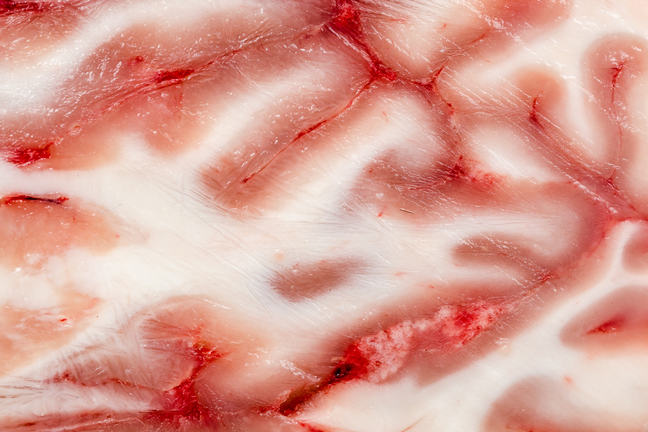 As the number of neurones in the brain is huge, it should come as no surprise that they are not randomly located but will need to be very well organised. If we cut the brain in half and look at the cut surface we can see that the material of the brain is not uniform.

If you look at the cross-sectional image of a part of the brain above, you will see darker areas and lighter areas. The darker areas are known as “grey matter” and are found on the outer surface as well as forming structures in the centre of the brain. The lighter areas are the white matter and they tend to be beneath the outer grey matter layer and form bridges between the two halves of the brain. So, what gives these lighter and darker areas their colour? The answer is that these areas are formed from different parts of the neurones; remember back to the video where we looked at the structure of a typical neurone.

The grey matter is formed from the cell bodies and the dendrites and the white matter is where the axons are. We also saw that one of the types of glia could wrap around the axon forming the sausage-shaped structures; in the brain the glia are the oligodendrocyte type, in the peripheral nervous system they are the Schwann cell type. The myelin produced by the oligodendrocytes is a type of lipid (fat) and has a pale appearance. Hence, the lighter colour of the white matter. The bundling together of the myelinated axons forms large areas of white matter which are consistently found across the brains of all humans and are often given the name of “tracts”. What this organisation illustrates is that similar parts of the different neurones are grouped together.

What we can also see in the diagram is that the folds on the cortical surface, which we could observe when we looked at the external features of the brain in the earlier video, are also lined with grey matter and therefore the folds simply act to increase the surface area. If we look at the brains of lower mammals, rats for example, they do not have this appearance but rather have a smooth surface.

It all comes down to numbers

As brains evolved to be bigger and to contain more cells the structure had to adapt to accommodate these extra numbers. One option would be simply to have a greater surface area, but another was to evolve this folded appearance and is illustrated in the next video.