This content is taken from the Humanists UK's online course, Humanist Lives, with Alice Roberts. Join the course to learn more.
View course
3.10

Humanism in the Middle East 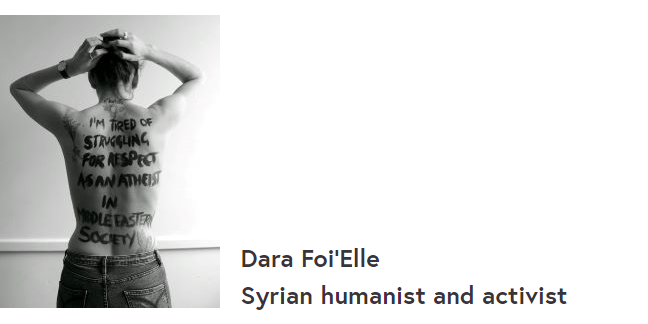 Being a humanist has become a key part of my identity. I am originally from a Christian minority in Syria and Turkey, grew up in Switzerland and studied in the UK, and now live and work in Lebanon. Both Syria and Lebanon are countries that have deeply rooted sectarianism in society, and for me it has become important to remove myself from this narrative of one sect/religion against the other. I am not a part of any of these narratives. I support freedom of belief and equality of all sects and religions in the region, but, as someone who does not believe in god and identifies as a humanist, I also want to receive the same tolerance and support.

Most of the challenges I have faced are connected with being unable to be open about my views, and this still continues until today. My closest friends and a small part of my family, are aware of my non-religious views, but, in general, the people I meet on a daily basis in my work can’t know about it. Although Lebanon appears to be a more open-minded society, sectarianism is deeply rooted, and since the outbreak of the Syrian Civil War all the religions have become more conservative and more aggressive towards each other. Humanists and secular people would get crushed by those forces if they came out to the greater public.

Becoming more open as a humanist within the Middle Eastern Christian diaspora mostly resulted in shunning and being insulted online. But since it is mostly young people who are aware of my situation, and not the elder generations or the religious leadership, I have been safe enough. I face disagreement for my belief that Muslims and Christians should be treated equally. They usually belittle me for being a bit ‘crazy’ or naïve. Some of the most hostile confrontations I face are in regard to homophobia. I’m a very strong and outspoken ally of the LGBTQ community.

I currently work for a Syrian NGO based in Beirut, focusing on justice for women who have suffered in war and ensuring they have a voice in the peace process, and on the incubation of local civil society organisations within Syria. My goal in all areas of life is justice. I truly believe that societies struggling with post-conflict reconciliation cannot achieve a sustainable future if there is not at least an attempt to secure justice for all the victims and perpetrators involved. This sense of justice in my view can only be achieved with a humanist ideology. The sectarian narrative in the Syrian civil war will not allow justice for all the involved groups, be it religious, ethnic, or political. For me humanism is about putting all those differences aside.

I think the question of what motivates me is not necessary to answer. For people to do good or change something in the world, a motivation sounds like an ulterior motive. I truly believe in what I do without having a reason or agenda that pushes me to continue. Maybe it’s a strong moral sense of right and wrong, fairness, and justice that lets me take risks as a humanist and activist in the Syrian context, risking my own freedom and safety whenever I travel to Syria and writing articles afterwards.

I do believe that humanism is the future for society. However, I have recently become very critical of different regional movements. Some people in the ‘atheist movements’ in the US and Europe have expressed Islamophobic and xenophobic sentiments, which I don’t want to be associated with. I do believe that different cultures and regions can have different approaches to humanism, and allowing Western movements to dominate the debate for others just feels wrong. It feels like a new form of colonialism. Maybe they do mean well, but in my opinion they cause more damage than good. I encourage more humanists from the Global South and in particular from the Middle East to work on their own definitions of humanism without relying on Western writers. There are many sources in our heritage that can also influence our creation of a humanist philosophy and make it more accessible to people. This will open up new debates within our society and not make it look like we need Western interference to reach a form of enlightenment. I do believe we have the capabilities and literary sources throughout the Middle Eastern heritage to achieve this.

Question: How much should humanists in the West ‘interfere’ in supporting humanism to flourish in other parts of the world? When might it be helpful? When not?