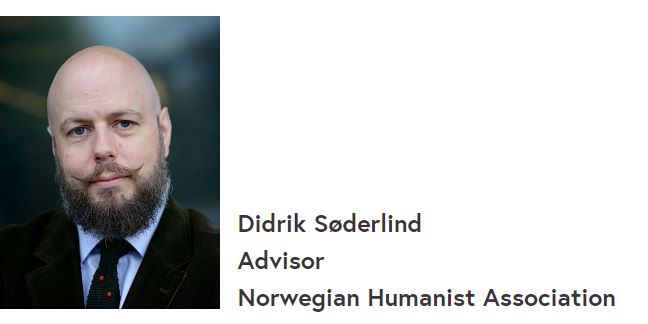 In some parts of the world humanism is a much more established feature of modern society. The article below is written by Didrik Søderlind. Didrik is a journalist and author, and advisor for the Norwegian Humanist Association.

Since its founding in 1956, Human-Etisk Forbund (HEF, The Norwegian Humanist Association) has grown to over 90,000 members. This is a substantial number considering Norway has just over 5 million inhabitants, making it both the largest humanist organisation in the world and the largest faith or lifestance group outside the (traditionally state-linked) Church of Norway.

There are several reasons for this success. One is that the Norwegian state has a policy of funding the Church of Norway, and compensates other faith and lifestance groups accordingly. This has given HEF a generous and secure economic framework.

It would be misleading to credit financial stability alone. Another reason for HEF’s success is that humanism is in line with how the average Norwegian thinks. While Christianity is alive and well in Norway (although phenomena such as fundamentalism and creationism are pushed to the margins by Christians themselves), a majority of Norwegians report that they do not believe in god. This majority is quite recent, but is the product of decades in which faith has been in decline.

There’s very little animosity or aggression towards non-believers in Norway, although some who grew up with minority religious backgrounds (Muslims, Jehovah’s Witnesses, and so on) might face challenges and need support. Many Norwegians have little interest in religion, a Norwegian cliché being ‘nature is my church’. Thus, the average Norwegian humanist is in many ways an average Norwegian.

Another reason for humanism’s mainstream acceptance is that HEF delivers ceremonies that are remarkably popular. Confirmations are a big deal in Norway, and while a majority of young people still choose to be confirmed in the Church of Norway, humanist confirmations are chosen by almost 20% of Norwegian 14-year-olds. The number is growing. Humanist weddings and funerals are also gaining popularity, while our name-fastening ceremonies (an alternative to baptisms) are something we’re working to make better known. These ceremonies expose many Norwegians to HEF’s work, and their reactions tend to be positive.

Another field that HEF is venturing into is that of humanist chaplaincy. The organisation recently got the first humanist chaplain into the Norwegian Army, and more are set to come in the next years. Work is also beginning to place chaplains in hospitals and universities, and within the penal system.

HEF has been active in interfaith dialogue work since it was formalised in 1991 – something that is often difficult for humanist organisations internationally. HEF also participates in the umbrella organisation Council for Religious and Life Stance Communities in Norway (STL), which ‘works to promote equality and understanding between various communities’. As the leadership of STL rotates between the member organisations, this has led to situations where humanists have represented Norwegian Catholics and Muslims vis-à-vis the Norwegian authorities. This dialogical approach to working has probably been a good way for humanism to enter the mainstream in a country where making a big splash about god (either as a proselytising Christian or an outspoken ‘New Atheist’) can be seen as weird and a bit vulgar.

HEF also has a youth wing, Norwegian Humanist Youth (Humanistisk ungdom), with almost 1,000 members. Its activities include a week-long summer camp with a focus on existential and ethical discussions, typically attended by about 150 people.

Schools in Norway teach about both religions and humanism. In theory, the curriculum is non-partisan, but HEF points out that Christianity takes up an unreasonably large amount of the time allotted, and also tends to be implicitly presented as ‘the religion of Norwegians’. School services in church before Christmas are also the subject of public debates every year.

Part of HEF’s way of being a humanist organisation is to not only keep a watchful eye on religious organisations and practices, but also to tackle subjects such as extremism, populism, conspiracy thinking, and the demonisation of minorities. One result of this was that during the trial against the far-right mass-murderer Anders Behring Breivik, a key moment in modern Norwegian history, a number of expert witnesses had links to HEF.

Humanism is now firmly entrenched in the cultural mainstream of Norway. A potential danger for HEF as a membership organisation is that humanism actually becomes the mainstream to such an extent that Norwegians don’t see any need to join HEF. However, so far that does not seem to have happened, as HEF continues to receive a steady stream of new members.

Question: What are the features of a society that you think enable humanism to flourish?