Sometimes, humanists will devote their time and attention to helping individuals in need in their local community. Often, this will not be carried out under the banner of ‘humanism’. Below, Bob Scott writes about an initiative started by members of Humanist Society Scotland to support the homeless in Glasgow. 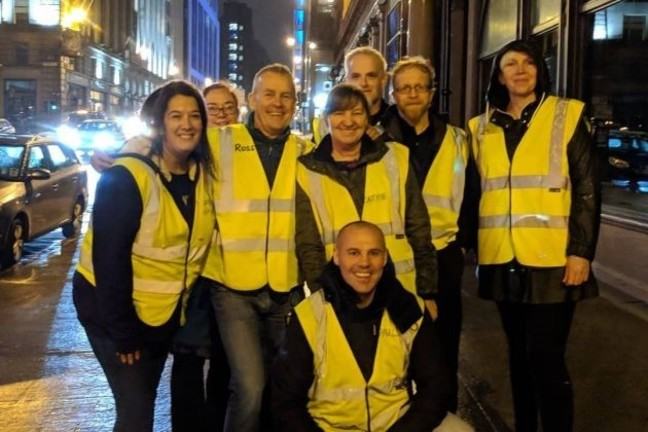 Since 2011, Humanist Society Scotland has been running a soup kitchen in Glasgow. Every Thursday evening, plus some Sundays, around ten volunteers set up a stall on the pavement at the same location in the city centre. Tea, coffee, soft drinks, and hot chocolate are made available, plus goodies such as tablet (a Scottish confectionery), crisps, biscuits, and cake, all supplied by the volunteers.

Starting out with a handful of enthusiasts from the Glasgow Humanist Group, the numbers involved in operating the soup kitchen – affectionately known as the T Run – have grown considerably. Now, every month almost 100 volunteers declare their availability and are allocated a slot. Once the service became firmly established, major food outlets including M&S, Lidl, Prêt, Sainsbury’s, and Greggs proved highly receptive to overtures for any surplus items they might have. As a consequence, it is not unusual for ten or more crates of bread, fruit, sandwiches, and pastries to be distributed. Nothing is wasted. At the end of the session, after being open for business for an hour or so, we deliver any leftovers to hostels for the homeless.

Those who visit the soup kitchen are of a wide variety of backgrounds, nationalities, and ages. Invariably, more men than women turn up. Numbers vary and are unpredictable, but we rarely see fewer than thirty and frequently considerably more than that. Problems they are facing include homelessness, family breakdown, alcohol and drug misuse, prostitution, poverty, immigration difficulties, and outstanding court warrants. A few may be mentally ill or disinhibited by substance misuse. The vast majority are remarkably polite and thankful for the little we can do. Some travel amazingly long distances to be there. Many come as much for the companionship and social networking the venue provides as for the food and drink on offer. No attempt is made to pry into any individual’s personal circumstances, including their beliefs. We provide a sympathetic, non-judgemental ear to what they have to say.

About two years ago, concerns were raised that some rough sleepers were not visiting our static soup kitchen, despite being aware of its existence. A preliminary survey confirmed those suspicions, and a mobile version of the T Run – the T Walk – was rapidly established. This operates every Wednesday evening with up to ten volunteers divided into three teams. Several hours are spent visiting locations likely to be used by rough sleepers. Most weeks around fifty individuals are contacted who, as a generalisation, are physically and mentally less well than the T Run’s clients. In addition to carrying rucksacks, stuffed full with warm clothes, each team is equipped with trolleys laden with essential items for the homeless, including space blankets, hot and cold drinks, soup, sandwiches, underwear, socks, sanitary products, toothpaste, and chocolate bars. 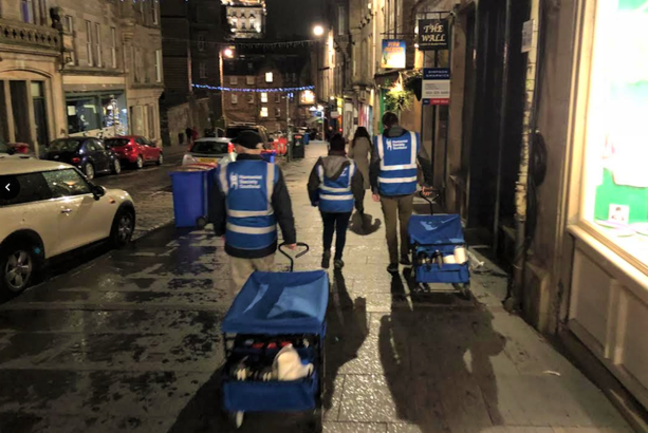 So, what lessons might be learned from our experience, and what has ensured the continuing success of the StreetCare initiative?

Getting Started. The project began after a cohort of Humanist Society Scotland members felt that more could be done to promote the practical dimensions of humanism. They embarked on a search to find something of value – something ‘hands on’ – rather than limiting themselves to discussions about the philosophical aspects of belief. This group, whimsically known as the Catalytic Converters, considered various options, some more fanciful than others, before settling on the suggestion of a soup kitchen. It was chosen on the grounds that it could be easily established and relatively simple to operate; it should not require volunteers to make an unrealistic commitment of their time and energies, nor should it cost much money to run. Those criteria turned out to be reasonably accurate.

Motivation. The background of the volunteers is as varied as that of the clients, but there is a shared sense of enthusiasm for the project. Each of us comes away from a session feeling that the time has been very well spent, irrespective of what the infamous West of Scotland weather might have thrown at us. The cheery banter with the clients, many of whom have become well known over the years, is a constant source of amusement and light relief for both volunteers and clients alike. Put simply, it is great fun. Right from the start, the intention has been to keep it that way. Pains continue to be taken to prevent the sessions from ever becoming a chore. It is a stimulating and rewarding way to spend an evening.

We must have been doing something right, for similar Humanist Society Scotland initiatives have recently been established in Edinburgh and Stirling, with further locations under consideration.