This content is taken from the Deakin University's online course, Introduction to Sustainability and Development. Join the course to learn more.
View course
1.5

0:09Skip to 0 minutes and 9 seconds SPEAKER: Climate change at its core is a change in the pattern of weather. Weather is the state of the atmosphere, including temperature, humidity, wind, rainfall, and so on over a specific period of time. Weather is influenced by the land surfaces, oceans, and ice sheets, which together with the atmosphere, form what’s called the climate system. Climate change is more than just changes in weather, but it’s a change in the patterns of weather over longer periods of time, decades or more. The Earth is basically a greenhouse with a blanket of atmosphere, which makes the planet habitable. The atmosphere consists of layers of gases held in place by gravity.

0:59Skip to 0 minutes and 59 seconds The Earth’s atmosphere is around 78% nitrogen, which is inert, roughly 21% oxygen, which we breathe, and around 1% a mix of other gases, including carbon dioxide in trace amounts and water vapour. There’s been fluctuations in each of these gases over extended periods of time. Think ice ages. A key part of understanding climate change is understanding the relationship between climate change and carbon dioxide. There have been fluctuations in CO2 levels, which correspond to the temperature changes over the last 800,000 years. However, the concentrations of CO2 have stayed within fairly tight boundaries. During the ice ages, they were around 200 parts per million. Between ice ages, they were around 280 parts per million.

1:50Skip to 1 minute and 50 seconds CO2 levels went above 400 parts per million in 2013 for the first time. This vast rise is consistent with human CO2 emissions, primarily fossil fuel burning. NASA data shows that if CO2 emissions remain unchecked, CO2 concentrations could go as high as 1,500 parts per million. Increasing greenhouse gas concentrations increases the amount of solar radiation retained in the atmosphere, increasing the temperature. Temperatures will continue to rise for a decade as a result of existing greenhouse gas increases. The decisions we make now for future emissions are critical.

2:37Skip to 2 minutes and 37 seconds The impact of human-induced climate change is incredibly wide-ranging. The Intergovernmental Panel on Climate Change, or IPCC, stated that the net damage cost is significant and will increase over time. The existing impact of climate change can be seen in the loss of sea ice with the Arctic likely to become ice-free in summer by mid-century. We can look forward to accelerated sea level rise. Sea levels will rise up to 1 metre by 2100. If carbon emissions are not stabilised below 700 parts per million, sea levels will continue to rise to 3 metres. Temperatures will continue to rise. We’ll have longer, more intense heat waves.

3:23Skip to 3 minutes and 23 seconds Changing temperatures will impact where and when crops can be grown and are likely to lead to an increase in the spread and incidence of infectious diseases. There will be changes in rainfall. There will be more significant weather events, droughts, heat waves, hurricanes and storms.

3:46Skip to 3 minutes and 46 seconds There are two approaches to dealing with climate change. Given that CO2 remains in the atmosphere for decades, we have to deal with existing impacts as well as reducing future impacts. The first approach is mitigation, the urgent reduction and stabilisation of greenhouse gases in the atmosphere. The second approach is adaptation, which requires us to adapt to the climate change that’s unavoidable due to human behaviour to date.

4:23Skip to 4 minutes and 23 seconds Ocean acidification has been called climate change’s evil twin. Around 30% to 40% of CO2 from human activity is absorbed by the ocean. Chemical reactions occur that reduce the pH of seawater, acidification, and cause changes in carbonate ions and calcium carbonate saturation levels. From the Industrial Revolution to now, pH of the ocean surface has dropped by 0.1 pH. It doesn’t sound like a lot, but it’s roughly a 30% increase in acidity.

5:01Skip to 5 minutes and 1 second Some algae and seagrass may benefit, but shelled organisms can have problems with creating or maintaining shells, which are calcium-based. This can negatively impact coral reefs as well as shellfish. For example, oysters, clams, sea urchins, shallow water corals, deep sea corals, and calcareous plankton. The entire marine food web could potentially be at risk as well as associated economic issues of fisheries collapse.

5:39Skip to 5 minutes and 39 seconds Reduce CO2 emissions, and this will, of course, contribute to climate change also.

Development can have a high cost for the planet.

The exploitation of natural resources introduces a clear tension between maintenance of environmental sustainability and human development.

Looking at the whole spectrum of human development over the past 10,000 years, particularly the past 100 years, it is difficult to measure the real impact that human development has had on the environment. One way to do this is to use the notion of planetary boundaries developed by the Stockholm Resilience Institute. 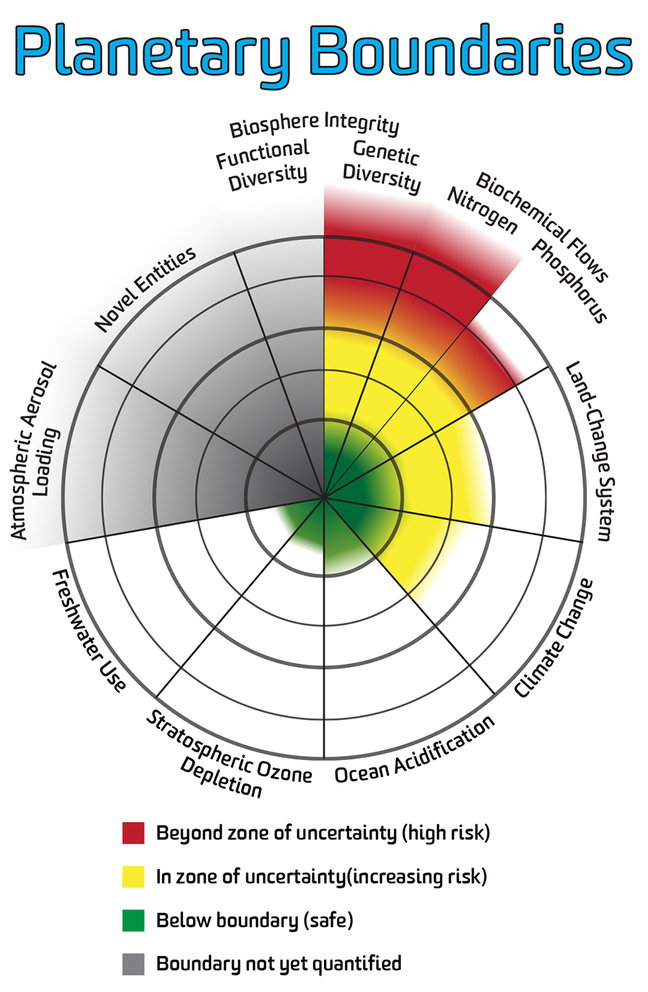 The planetary boundaries graphic represents significant negative impacts that humans have had on the environment. The boundaries are environmental limits within which life on earth can operate safely. (Steffen et al, 2015).

You can learn a little more about the details of the planetary boundaries by reading the Stockholm Resilience Institute’s explanation.

Identify the four squeezes on the planet, reflect on the link between planetary squeezes and the crossing of the four boundaries.

Consider how have we got to this point? Share your thoughts in the comments.