How do bacterial genomes change?

There are several different ways in which bacterial genomes can change. Most of the time, these changes will not be important for disease. However, some changes can cause a disease outbreak or make a bacterium resistant to antibiotics. Because some changes accumulate over time, we can use them to track the spread of disease-causing bacteria. These changes can be identified using genome sequencing. 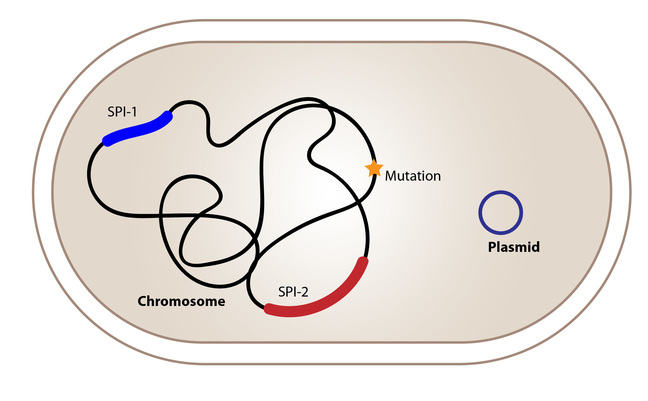 The image above shows examples of different types of genetic change that can occur in bacteria: acquisition of plasmids, chromosomal mutations and acquisition of pathogenicity islands (SPI-1 and SPI-2, shown in blue and red). In Salmonella, a common cause of food poisoning, all these types of genomic change are involved in how it causes disease.

In most bacteria, the majority of DNA is found in a single, circular molecule called the chromosome. However, DNA can also be found in plasmids, which replicate independently from the chromosome. Plasmids are important because they are mobile and can move between bacteria of the same, or even different, species. Plasmids sometimes encode disease-causing genes or antibiotic resistance genes.

If we know that a certain plasmid is involved in allowing bacteria to cause disease, we can use genome sequencing to look for it. This may help us to understand why a normally benign bacterium has started to become a health problem.

Salmonella is known to carry plasmids that can make it resistant to antibiotics.

Bacterial cells multiply by copying their genomes and dividing into two new cells, each with a single copy of the genome. Every time this happens there will be a small number of errors in the sequence. These errors are known as mutations. This is the main way in which organisms change and can adapt to new environments. Differences in individual DNA bases in a gene can change the amino acids in the corresponding protein and can result in bacteria that causes a more or less severe disease. Most of the time these differences do not cause any obvious change in pathogenicity. The differences, known as Single Nucleotide Polymorphisms (SNPs, pronounced snips), are however useful for understanding the spread of bacterial pathogens or identifying the source of an outbreak. We will present several examples in week 2. For some bacterial species, we expect that, from around 4 million bases in a bacterial genome, at least one will change as the bacterium spreads from one individual to the next. Because these changes accumulate as the bacterium spreads, we can determine, at each stage, who passed the bacterium to whom. No more arguments between parents about whose child infected who at school!

Specific mutations have been described in Salmonella which change its disease-causing capability. For example, a single SNP in the PNPase gene leads to a persistent infection in mice.

There are other types of change in the genome (genetic variation) that we can find using genome sequencing. One of the most important for disease-causing bacteria is the acquisition of pathogenicity islands. These are similar to plasmids. But instead of being separate DNA molecules, pathogenicity islands are found inserted within the bacterial chromosome. They are able to ‘jump’ in and out of the chromosome and can find their way into other bacteria. This means that, like plasmids, they can also spread between bacteria. They may contain toxin genes and genes encoding the machinery to secrete toxins and a variety of other genes helping them to cause disease. Because the islands can move between bacteria, potential pathogens have the opportunity to collect a variety of genetic tools, making them into more effective disease-causing organisms.

Salmonella has two pathogenicity islands (SPI-1 and SPI-2) that encode factors needed to invade host cells. It cannot cause infection without them.