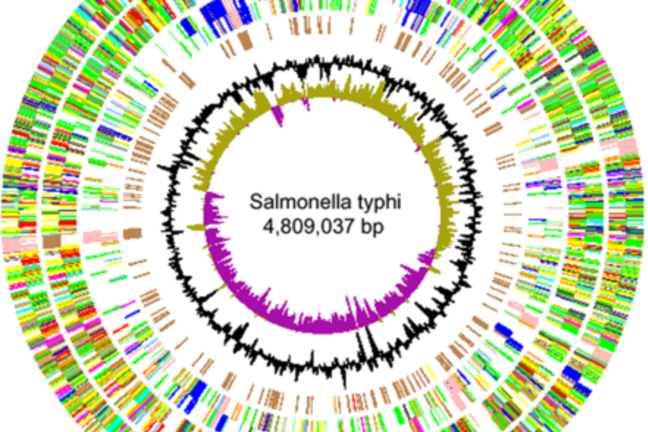 What has reference genome sequencing been useful for?

We have learned a lot from sequencing and examining small numbers of reference genomes. So we have summarised some of the lessons learned for you below with links to research papers. The ‘Abstracts’ (summaries) are worth reading and are freely accessible.

After reading each summary and abstract, we encourage you to share your thoughts on the research and the main finding in Comments.

(If you already have institutional or personal access you may be interested in viewing the full research papers. This is not required for the course. Much scientific research is published in journals that require payment).

Rickettsia prowazekii is the cause of epidemic typhus, which killed millions in the early 20th century. It is transmitted by lice, and lives inside human cells. It cannot reproduce outside of these cells and relies heavily on them for many of the things it needs. It was found to have just over 800 genes. Many of the genes that other living things need are not present in the Rickettsia genome. Instead, Rickettsia relies on the host cell to provide for it. Once such genes have been lost from the genome, it is essentially impossible to get them back. Rickettsia seems to have become permanently dependent on its host and could not evolve back into a free-living bacterium.

You can read the original research here: The genome sequence of Rickettsia prowazekii and the origin of mitochondria

Vaccines work by exposing our immune systems to a part or the whole of a bacterium in a controlled way. Successful vaccination means that our immune systems can recognise the pathogen and can quickly destroy it is subsequently encountered. Identifying an appropriate part of the bacterium to use as a vaccine is difficult. Reverse vaccinology involves looking through the genome of the bacterium to identify a gene, encoding a protein, which might make a good vaccine candidate. This was done for Neisseria meningitidis, a major cause of meningitis. With the genome sequence in hand, the researchers had all of the possible vaccine candidates. They proceeded to sift through them looking for the best candidates. This work eventually led to the first vaccine for a particular form of meningitis.

You can read the original research here: Identification of Vaccine Candidates Against Serogroup B Meningococcus by Whole-Genome Sequencing and a review of the story from disease epidemiology to public health impact

Genomes tell us about what food bacteria need to survive

Tropheryma whipplei causes the potentially fatal Whipple’s disease. It has been known for around 100 years, but was difficult to study because it could not easily be grown in the laboratory. The sequencing of its genome revealed that it had lost a variety of genes involved in producing amino acids, the building blocks of proteins. By giving it the amino acids the bacterium needed, the researchers were able to easily grow it in the laboratory for the first time.

Drug targets can be revealed by genome sequencing

Understanding how drugs work is important for understanding drug resistance. If we know what proteins are targeted by drugs and how bacteria evolve to become resistant, we could monitor this resistance and try to intervene. We will discuss how this is done in more detail in week 2. Mycobacterium tuberculosis causes tuberculosis, one of the leading causes of death from infectious diseases. There is a need to produce new drugs for this disease, as many bacteria have become resistant to the drugs available. Unfortunately, it is not hard for bacteria to become resistant to a new drug in the laboratory. If they are grown for successive generations in the presence of low doses of the drug, sooner or later they will become resistant. Although this is worrying, it can help us to understand more about how the drug works. Researchers, who had developed a new drug against M. tuberculosis made resistant bacteria and then sequenced their genomes, identifying the gene involved in resistance. The simplest way for a bacterium to become resistant to a drug is often to aquire mutations in the gene encoding the protein to which the drug binds – the drug target. This can prevent the drug from binding and working properly. In this experiment, the mutated gene did indeed turn out to encode the drug target.

You can read the original research here: A Diarylquinoline Drug Active on the ATP Synthase of Mycobacterium tuberculosis