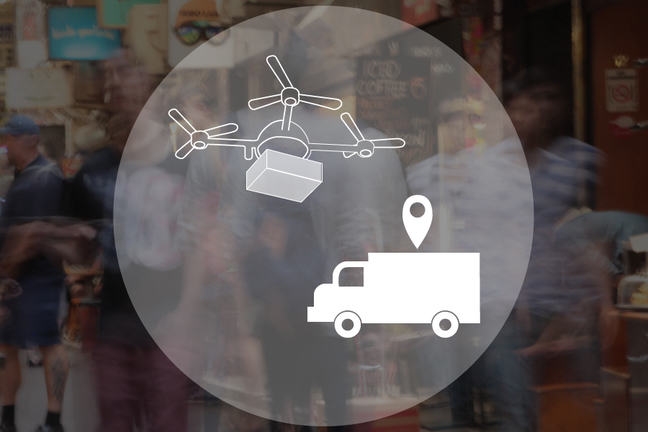 This step demonstrates that drones and driverless vehicles have the capacity to revolutionise last-mile deliveries - and they’re starting NOW.

Recent advances in robotics, drone and autonomous vehicle technologies have heightened the prospects of expanding the distribution networks in omni-channel retailing. This may sound futuristic, but some logistics companies have used drones to deliver parcels to remote, hard-to-access locations to make them logistically reachable. The drones are auto-loaded and unloaded, therefore, increasing efficiency and flexibility.

Check out this video from Amazon about the development of Amazon Prime Air, a delivery system that aims to bring packages to customers rapidly (aim no more than 30 minutes) using drones. While the technology is already available, the regulations governing the commercial use of drones in last-mile deliveries is yet to be fully developed. It may be sometime before Prime Air can be deployed on a large scale. DHL also showcases how drones are changing their delivery services.

Another interesting development in this space includes driverless trucks which are also fast-weaving their way into logistics operations. In TechCrunch, Ryan Peterson wrote “The driverless truck is coming, and it’s going to automate millions of jobs” and that “a convoy of self-driving trucks recently drove across Europe and arrived at the Port of Rotterdam” on April 2016.

Read the news article by Stacy Liberator for DailyMail.com that explains Google is also building a smart delivery truck (besides developing both delivery drones and self-driving cars) via an Autonomous Delivery Platform, with lockers placed inside the cargo area and a pin code for customers to access to their packages. Besides receiving a message when the vehicle is nearby, customers could also pay for their packages when retrieving their parcels. The self-driving truck is also an auto-cashier on wheels.

You may have other thoughts about how 3D printing can aid the supply chain too - printed drones and driverless cars!

Other Benefits of Driverless Trucks

Industry insiders (see e.g., CNN in links below) have identified many benefits, in addition to logistics, associated with the use of driverless trucks. These include savings on labour cost, increase in fuel efficiency, and reduction in road accidents due to human error. The savings on labour cost is not due to the replacement of truck drivers with auto-drivers, as the former would likely become “transport managers”, but more so because of the removal of the driving-hour restriction placed on truck drivers. Similarly, the increase in fuel efficiency is not necessarily due to technological improvement but to the ability of driverless trucks to achieve an optimal cruising speed for a larger part of the journey (e.g., running on freeways).

The Downside of Driverless Trucks

The downside of driverless trucks, however, is the string of losses in jobs and business opportunities created by the trucking industry, such as highway diners, rest stops, motels and other businesses catering to truck drivers. Similar to the case of drones, there would also be regulatory barriers and issues which need quick resolution.

Choose to view the videos in the links section below. You can see more about how vehicle technologies would revolutionise last-mile deliveries. Driverless trucks can obviously bring many benefits to the supply chain, but they obviously have a human cost in terms of substantial job losses which is not good for the economy.

In order to capitalise on the many benefits drones and driverless trucks will bring to supply chains, can you suggest some pragmatic measures to effectively offset the human cost of substantial job and business losses.

Get an introduction to how human relations, specifically Green HR, can help create a business that’s environmentally friendly.