Timing and editing your audio

Because you can’t freeze-frame audio - it only exists in real time! The importance of timing will vary depending on the type of podcast you are interested in making. A podcast built around a narrative will use timing differently to a panel-based discussion podcast.

Listen to these two examples from Phoebe’s Fall:

Episode Two ends with two ‘cliffhanger’ grabs from Phoebe’s parents, that will tee up the next episode. In the first, Phoebe’s father, Len, is remembering an incident shortly after her death, when her boyfriend’s father, George, suggested to him it was suicide. Len is a psychiatrist and George is not. He now realises it was inappropriate of George to have been effectively ‘diagnosing’ Phoebe’s state of mind and is chastising himself for not having challenged it. We then move to Phoebe’s mother, Natalie, who makes the shock revelation that she has secretly recorded a meeting with Phoebe’s boyfriend after Phoebe’s death. Both ‘grabs’ are strong. But we need about 5 seconds more of music between Len and Natalie, to allow us to fully take in the import of his comment. Instead, Natalie’s comment follows too quickly and we can’t process what Len said.

This is a reflective, emotional section where we accompany Phoebe’s family as they recall Phoebe’s lakeside funeral. We combine family home recordings of her grandmother’s affectionate speech, the audience response and her mother Natalie’s description and recollections, with the lapping of the lake, used as both timing and mood setter. We end with a beautifully judged use of the bird calls of kites, referenced by Natalie as a kind of evocation of Phoebe’s spirit.

Editing is both an art and a craft. Its purpose is to:

Always log your audio tape. This is not a transcript, it’s a map that shows you what you have, where it is and how useful it is as audio.

Make a table with three columns: 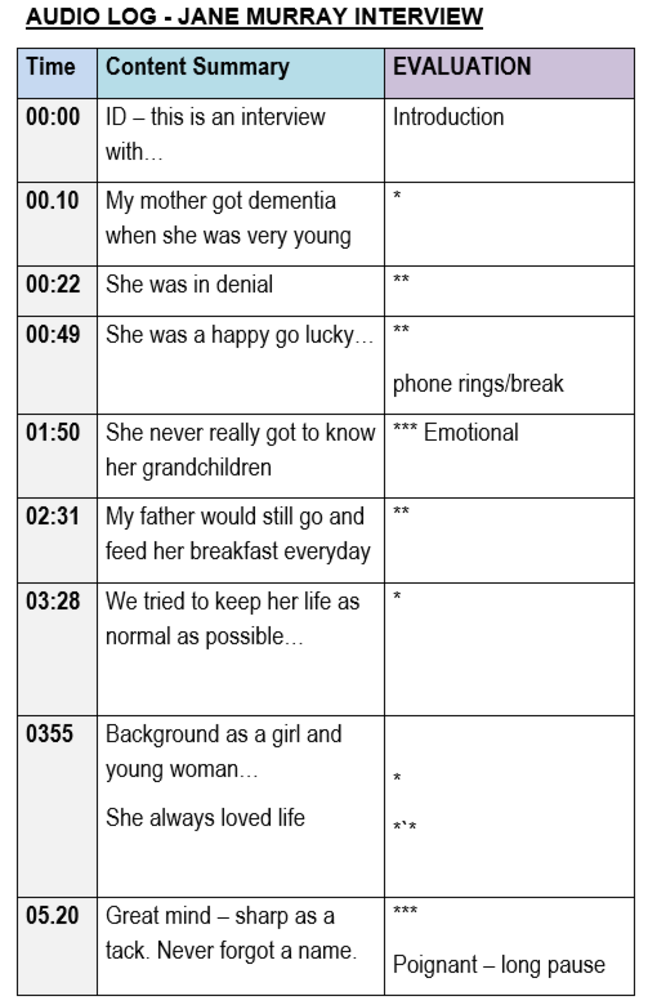 Stay tuned for more ideas about how to edit together the best of your interview audio.

Read more about the importance of rhythm and pause in editing speech. See the reading attached at the bottom of the step