This content is taken from the University of Wollongong's online course, The Power of Podcasting for Storytelling. Join the course to learn more.
View course
2.9

0:06Skip to 0 minutes and 6 seconds We’ve got our interviews. We’ve decided whether or not we want to host. You know, we’ve got an idea of where our story wants to go. How do we actually get that podcast coming together now? OK, so you’ve got your story, you’ve got your host, you’re basically deciding who you interviewed to tell that story. Usually, it’s done via interview. What other elements can you bring into play besides interview, like those little sound scenes or little bridging scenes of actuality? There might be other things. If you’re talking about your bands, you might be able to find old home movies or video clips of garage rehearsals or whatever. All of those will help. And you do all those interviews. You log them.

0:51Skip to 0 minutes and 51 seconds So you have to do your housekeeping. You have to label, log, know where everything is and what the content is. I don’t– people haven’t got time to do transcripts, most people. So you would just do a basic log which maps where the stuff is on the tape, the timing. It means listening through. You should be able to do it in about 1 and 1/2 times the timing it takes to do the audio. So a 30 minute interview would take 45 minutes. And we do the star evaluation that I remembered teaching you. So if it’s good, you give it one star. If it’s pretty strong, you give it two. And if it’s really out of the ballpark, you give it three.

1:26Skip to 1 minute and 26 seconds You know, if it’s rah rah stuff. And then you can easily go back, look at that interview, and say, OK, how do I join up all the three star and two star bits? The other stuff that gets no stars is either going to be on the cutting room floor, or you’re going to digest it back into your narration. It’s not working as audio. It’s not said well, or it’s too waffly, or it’s just plain boring or it’s irrelevant. So have that system. And that really is quite grounding. You don’t get overwhelmed then. And then you just sort of work through all the interviews until you’ve covered all the angles of your story.

2:00Skip to 2 minutes and 0 seconds So with the girl with anorexia, the producer, Massico, she interviewed Kate– that was a pseudonym– her mother, and she had a doctor, and she had the subject of Kate’s interest was a singer, who she was really in to, Amanda Parker. And she had all these elements, but the main elements were the interviews with Kate, and then she had this very interesting device. She gave Kate an audio recorder and said keep an audio diary of how you’re feeling. And so she then had all these things to play with, and then she just wove them together into this.

2:35Skip to 2 minutes and 35 seconds And she also recorded actuality of the family having meals and doing things– visiting Kate, the odd time when she was in hospital, going up in the lift, bing. You can just take somebody straight to a place with sound. And then she just structured it pretty chronologically. And that made it really flow. And it was really very engaging. So what’s the most important part when we’re crafting our podcast, do you think? What do we need to spend the most time on? Knowing your material. Knowing where everything is that’s good in the audio you’ve gathered. So really immersing yourself. Don’t try and do it for two hours here or an hour there. Much better to block out a series of days.

3:19Skip to 3 minutes and 19 seconds And you might have spent a lot of time building up the interviews. But maybe you block out a week for production of your podcast, and you’re going to just quickly whiz back through your logs. And you should be able to hear in your head– if you’ve done the logs well– the way somebody said that thing. And then, you can kind of do a map on paper of where you might start. I tend to start with the beginning. What’s the most arresting thing way into this story? Now, it might be a soft lead in, where you just start. You’re sitting in the doctor’s surgery, and somebody says, next patient please.

3:58Skip to 3 minutes and 58 seconds And we know that we’re going to go in on a story with somebody. Or it might be a grab from the person saying, I can’t count the number of times I wished I was dead, or something very, very striking like that. So it depends on the mood, and the tone, and how much time you have got. If you’ve got a 60 minute thing, you can obviously spend much more time than if you’ve got 25 minutes. But then, I think in terms of little chapters. I actually think– some people think musically of little sections, like a movement in a piece of orchestra or a verse in a song. And then, it goes into a different register.

4:38Skip to 4 minutes and 38 seconds So think of your little sections and map them out. And then work on what bits of audio are related to that, what bits of interview, and you will inevitably come up with something that’s way too long. But then, you can chip away at that. It’s much easier than having nothing. Nothing and going on it. Yeah.

A jigsaw of words with the added creativity of sound, music, and texture 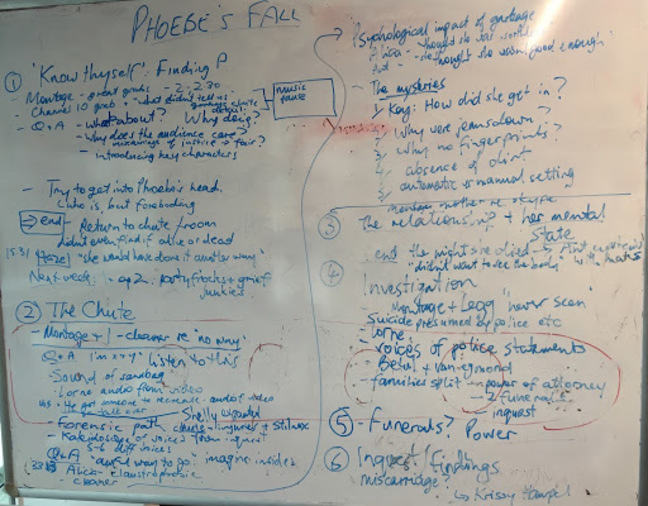 Context The whereabouts of Phoebe’s iPhone was one of the puzzles about her death. Did she have it when the strange “tomato soup” text was sent - or did someone else send that message, pretending to be her?

What we did: We opened Episode 4, about the police investigation, with a recreated version of that text, for dramatic purposes.

In this excerpt you will hear: