Until the nineteenth century, there was no clear understanding of colour theory, and the role of the primary colours, red, yellow and blue.

This kind of philosophical reasoning continued through the Renaissance, and was included in Leon Battista Alberti’s (1404-1472) treatise Della Pittura (On Painting) which was a very practical handbook for fine art painting and on the mixing of colours, though his scientific knowledge was very limited. He identified the primary colours on the basis of the understanding of the time of the four elements of matter: red (fire), blue (air), green (water) and grey (earth).

It wasn’t until Isaac Newton’s discovery of the colour spectrum in the early eighteenth century that the scientific basis of colour began to be unravelled. Later scientific and optical investigations by Johann von Goethe (who published his Theory of Colours in 1810) and Michel Chevreul (his Law of Simultaneous Colour Contrast published in 1839) concluded that the three primary colours were red, blue and yellow and that all other colours could be created through mixtures of these.

Nineteenth century artists were excited by these contemporary developments in colour theory and sought to use them in their painting. The Impressionists (1870s and 1880s) abandoned the conventional idea that the shadow of an object was made up from its colour with some brown or black added. Instead they experimented with the idea that the shadow of an object can be made up with dashes of its complementary colour. In an Impressionist painting, the shadow on an orange, for example, may be tinted with blue to increase its liveliness. 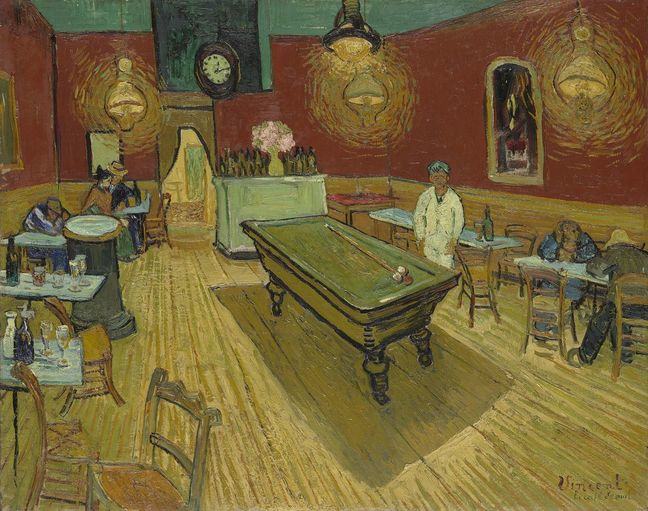 Vincent van Gogh (1853-1890) understood the effect of juxtaposing complementary colours. His painting Night Café in Arles is composed of jarring bright reds and greens next to each other “to express the terrible passions of humanity” as he said in a letter to his brother Theo.

Other art movements sought to base their painting solely on particular colour theories. Regular painting involved the physical mixing of pigments by the artist, but “optical mixing” – the mixing of coloured light in the viewer’s eye – created a more intense and luminous colour. To increase the luminosity of their paintings, the Pointillists devised their system of pure-colour juxtaposition, the arrangement of small dots of pure colour on the canvas. The most well-known of the Pointillists was Seurat (eg his Bathers at Asnieres). 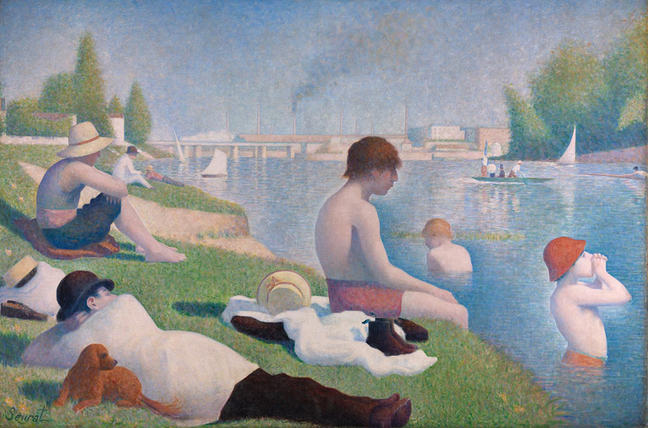 Seurat himself called the technique Chromoluminarism (colour luminousness) because from a distance the dots come together in the viewer’s eye and glow with brilliance. Divisionists used a similar technique of patterns of pure colour to form images, though with larger, cube-like brushstrokes.

(It is interesting to note that Pointillism is analogous to the four-color CMYK printing process used by some colour printers and large printing presses that place dots of Cyan (blue), Magenta (red), Yellow, and Key (black). Televisions and computer monitors use a similar technique to represent images using dots of red, green and blue (RGB) colours.)

The twentieth century saw artists experimenting more and more with colour – less to create an impression of nature but more to convey emotion and feeling. The Fauves (wild beasts) were so-called because their paintings were so brightly coloured.

By the mid twentieth century, artists like Matisse began to liberate colour from form. The colour is there not to convey likeness, but sensation. As he put it:

The Cubists, led by Georges Braque and Picasso, finally created an abstract art where form and colour become fully independent from the depicted subject. Instead of a naturalistic illusion, modern art more often represents the artist’s subjective sensation about what they are seeing. 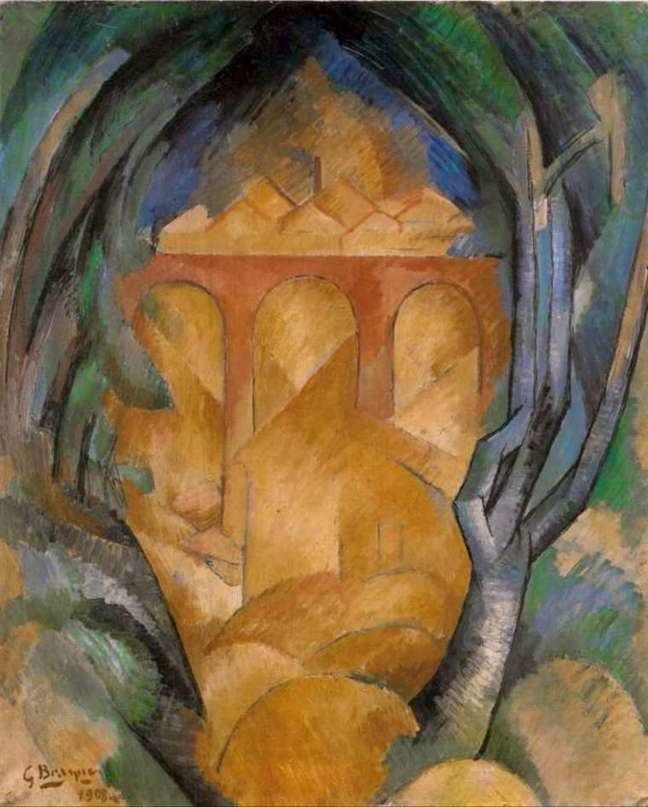 Colour in art could not exist without paints and pigments, the tools of the artists’ trade, and Sarah Gottesman has written a brief history of colour in art, which focuses on the development of key colour pigments, with illustrations.

You can explore more about pigments through the ages here.

Victoria Finlay presents four stories about the history of colours on YouTube. Learn what’s behind blue, yellow, white, and purple.

Finally, here’s a timeline of historical film colours – how colour was introduced into the movies, a twentieth century art form.