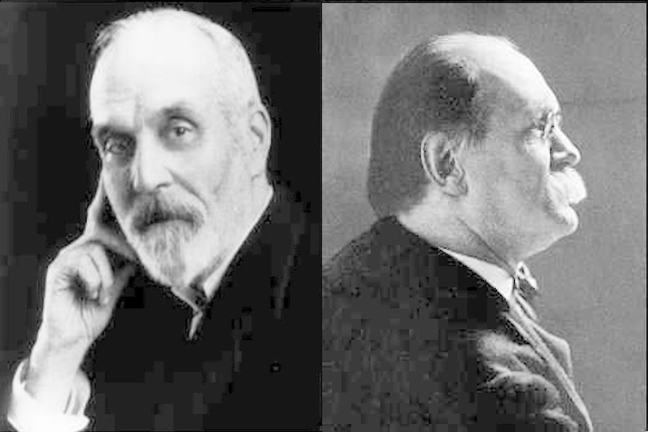 The next recreational mathematicians we are going to meet are: Henry Ernst Dudeney and Sam Loyd. Dudeney was the better mathematician while Loyd is considered a better puzzlist. The reason that we mention them together, is that they frequently exchanged puzzles, that is until Loyd published Dudeney’s puzzles under his own name…

Henry Dudeney was born in England in 1857 in Sussex, England. He never formally went to school, but he spent his spare time studying history and math, and playing chess. At a very early age, he started solving chess puzzles, later on expanding his interest to puzzles of all sorts. He worked from a young age as a clerk, but quickly made a lot of money publishing puzzles for magazines under the pseudonym: ‘Sphinx’. He corresponded regularly with an American counterpart, Sam Loyd, whose puzzles started to appear in England in 1893, but the two broke up after Dudeney accused Loyd of stealing some of his puzzles, which brings us to Sam Loyd…

Samuel (Sam) Loyd was born in Philadelphia, USA in 1841 to a well-off family, and grew up mainly in New York, where he received his formal school education. He was very talented in chess, and received many prizes and awards for solving chess problems. Later on, he trained as a steam and mechanical engineer, but never worked in the field as he made his money publishing puzzles and problems, though he did work for a short time as a plumbing contractor and as a businessman. Loyd struck a friendship with a British puzzler, Henry Dudeney, with whom he exchanged puzzles frequently. Loyd, however, was not as careful as he should have been. He did not credit Dudeney as being the creator of some of the puzzles that he published under his own name, as a result of which the friendship abruptly ended.

Dudeney and Loyd published many books and thousands of puzzles throughout the years. Dudeney’s most famous book was ‘The Canterbury Puzzles’, published in 1907. Sam Loyd’s was ‘Sam Loyd’s Cyclopedia of 5000 Puzzles, Tricks, and Conundrums’, published in 1914. Henry Ernst Dudeney died in April, 1930. Sam Loyd died, 19 years earlier, in April, 1911. Both left us with a huge legacy of math puzzles.

Now for some puzzles…

Can you solve these two puzzles of Dudeney and Loyd? You can help each other with questions and hints in the comments below, but please don’t give away the full answers so as not to spoil the fun for everyone else. Some more puzzles will be posted in the end of week quiz.

Buns were being sold at three prices: one for a penny, two for a penny, and three for a penny. Some children (there were as many boys as girls) were given seven pennies to spend on these buns, each child to receive exactly the same value in buns. Assuming that all buns remained whole, how many buns, and of what types, did each child receive? (from: 536 Puzzles and Curious Problems)

While enjoying a giddy ride at the carousel Sammy propounded a puzzle which reflects much credit to his mental abilities:   ‘One third of the number of kids riding ahead of me, added to three-quarter of those riding behind me gives the correct number of children on this Merry-Go-Round’ is the way he puts it; but it will puzzle you quite a little to tell just how many riders there were at this whirling circus? (from: Sam Loyd’s Cyclopedia of Puzzles)