0:07Skip to 0 minutes and 7 seconds Hi. My name is Enrique Castro-Sanchez. And I’m a postdoctoral researcher at Imperial College London. Over the next few minutes, I’ll talk to you about how we can engage patients and the public in research to tackle AMR. So how can we involve patients in the AMR debate? But in any case, it would be really useful to think about the understanding that society, patients, citizens may have about antimicrobial resistance. For example, we know that certain understanding is deficient or incorrect. Essentially, public understanding of antimicrobial resistance is very mixed.

0:50Skip to 0 minutes and 50 seconds The importance of increased awareness by citizens about AMR becomes evident, for example, when looking at this study that linked a reduction in antimicrobial prescribing following the introduction of national awareness campaigns focused on the public. It’s also useful to consider what kind of roles are given by national action plans and policies on AMR to citizens. In particular, our group was very interested in exploring, how national European antimicrobial resistance plans describe the participation of citizens in such activities? In particular, we were keen to explore what kind of language was used to describe the citizen participation as well of what kind of roles were given to citizens.

1:48Skip to 1 minute and 48 seconds Our analysis of 32 national action plans on AMS suggested that the focus of the plans was on increasing the awareness and education of citizens about AMR. But the behaviour change, the improvement of behaviours related to antimicrobial use were seen as much less important by the plans. For example, only 5 of the 11 plans explored in detail focus on improving the behaviour of citizens related to antimicrobial use, whereas 7 out of 11 plans aim to increase the awareness of education of citizens. Additionally, exploring the language used to address citizens and patients in the plans, the majority of documents use patient or the public rather than society or citizen. Such difference may be important considering that antimicrobials are a common good.

2:59Skip to 2 minutes and 59 seconds And there’s some perceptions of citizens and patients as consumers may use them to be much more selfish in their use of antimicrobials. The issue of the language that is used to talk about antimicrobials is also important from another point of view. It may be that patients and citizens are not able to take part in antimicrobial resistance interventions because of the language that is used by experts, scientists, and health care workers related to resistance.

3:39Skip to 3 minutes and 39 seconds These views have been put forward by some of the colleagues in this course and wrote an editorial suggesting that maybe citizens and patients were not able to really understand what we meant when we spoke about stewardship due to the different facets, differing aspects that antimicrobial stewardship could have and could refer to. In this editorial, these colleagues talked about the individual, multidisciplinary, community, national and global domains of antimicrobial stewardship. And it will be really interesting to reflect upon what these different facets may mean to patients. In addition to language, health literacy may be another crucial factor to explain and support the participation of citizens in antimicrobial stewardship interventions.

4:41Skip to 4 minutes and 41 seconds For example, in the UK, several national guidelines suggest and recommend that prescribers should take time to discuss with patients the nature of their condition or health problem as well as the benefits and harms of any immediate antimicrobial prescribing. That makes sense and seems positive. However, an important proportion of patients may not be able to make use of the information provided by prescribers related to antimicrobials. This European survey conducted in 2012 suggested that about 50% of European citizens did not have enough or sufficient health literacy skills, skills necessary to make use and understand health information. For example, the report suggested that up to 2/3 of citizens in Spain did not have the necessary skills to make best use of health information.

5:47Skip to 5 minutes and 47 seconds In essence, when we talk about health literacy, we refer to the degree to which individuals have the capacity to obtain, process, and understand basic health information and the services needed to make appropriate health decisions. This initial definition has been gradually refined and complemented. And it becomes evident by now that health literacy is essential to make best use not just of health care services but also to prevent disease and to promote health, and, again, not just from the point of view of the individual patient but also from groups of patients accessing services and keen to participate in the design of such services. We now know as well that low health literacy is associated with negative outcomes.

7:45Skip to 7 minutes and 45 seconds For example, our group explored the readability of the information related to Ebola on the websites of public health agencies across the world. Worryingly, we identified how a substantial proportion of citizens with low health literacy in the US, the UK, Canada, Australia, and Europe would not really have been able to understand the information provided about Ebola disease. In addition to health literacy, it may be useful to reflect upon the role that some social determinants may have in enabling participation of patients in AMS. You may remember, for instance, it may be really useful to consider the impact that some of these determinants may have on decisions by patients to use antibiotics.

8:38Skip to 8 minutes and 38 seconds Or maybe they impact their education, living and working conditions, employment or lack of employment, water and sanitation may have on such decisions to use antibiotics by citizens. Additionally, it may be useful for you to think about the impact that other determinants may have in these decisions about antibiotic use. Interestingly, antibiotics have been proposed as a remedy for the shortcomings that health care and social care systems may have. For example, antibiotics have been proposed to be a fix for the care that is provided in fractured health systems, for the lack of hygiene in settings of minimised resources, as well as a fix for the inequality that’s driven by political and economic environments. Think about it.

9:34Skip to 9 minutes and 34 seconds What would you do if you could not see your family doctor within a reasonable amount of time? In the UK, for example, we know that up to 1 in 4 patients cannot get through to the GP surgery to the family doctor. This lack of access may explain some of the behaviours related to antibiotics that we have already seen. For example, this lack of access may explain the increase in the number of antibiotics purchased over the counter or purchased over the internet. Why could patients in some areas of the UK be much more likely to receive antibiotics than others?

10:17Skip to 10 minutes and 17 seconds Our group has explored the impact that some dimensions of poverty may have in the likelihood of developing and acquiring infections that are difficult to treat. For example, our review exploring studies conducted in low- as well as high-income countries focus on dimensions of poverty and deprivation, identified how housing, income, and education were associated with infections difficult to treat both in high- and low-income countries. Some other factors, such as water and sanitation, were much less explored in high-income countries. And if poverty and deprivation are drivers of antimicrobial resistance, think about the impact that lifting millions of people out of poverty or social deprivation may have on the development and acquisition of antimicrobial-resistant infections.

11:19Skip to 11 minutes and 19 seconds For example, in the European Union, up to 115 million people were thought to be poor or socially deprived in 2010. And as we’ve seen, think about the impact that such poverty may have on determinants of prescription. I hope you found this module interesting and useful. I’ve spoken about how antimicrobial prescribing is balanced between clinical, non-clinical, and social demands, how effective communication between patients, prescribers, and other health care workers is paramount for successful antibiotic use. And finally, calling attention to inequalities and social determinants is required to encourage and support citizens and patients to participate in stewardship and research.

How to engage patient and public in research to tackle AMR

In this presentation, Dr Enrique Castro-Sanchez, Lead Academic Research Nurse and Honorary Consultant Nurse in Communication and Patient Engagement at the NIHR Health Protection Research Unit for Healthcare Associated Infection and Antimicrobial Resistance at Imperial College London, highlights a number of key considerations when trying to engage with patients and members of the public in research to tackle AMR.

He provides evidence-based insights into the broader aspects of engaging with patients and the public, including their perceived role at a national level, the language we use to discuss antibiotic use, the level of health literacy in different groups, and other social determinants which may influence their understanding and decisions around antibiotic use.

The video covers the following topics: 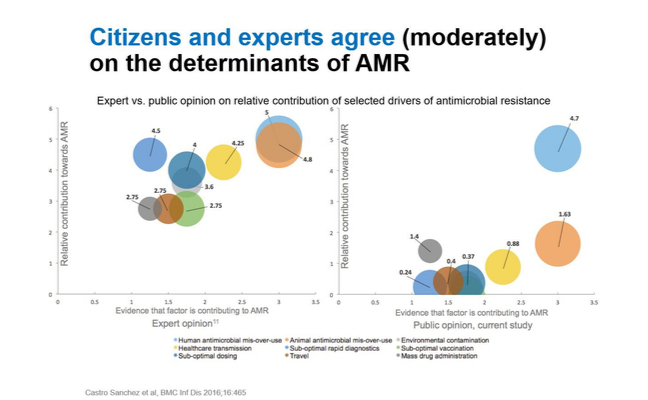 Campaigns have an impact in ensuring the views of citizens and experts regarding determinants of antimicrobial resistance are aligned. The image above shows research suggesting the public attribute development of resistance to a single factor - mainly misuse/overuse of antimicrobials in human health. This is shown on the right hand side.

The left hand side shows the factors experts feel are most important in development of resistance. There is a dramatic contrast, as experts appear to hold several factors at the same level of importance.

These findings are important as they allow us to design campaigns focused on citizens, which are tailored to the views citizens have.

Under see also you will find links to studies exploring the relationship between health literacy and antibiotic use.

There are some areas where no health literacy studies have been conducted:

What interventions can be carried out to address health literacy deficits?

One example could be aiming to improve the existing typical patient information on websites: often this can be not interestingly displayed, and it is static and impersonal to the patient.

A solution to this could be the development of apps which offer information relating to patient safety. For example, there may be videos which show users how to conduct proper hand hygiene, podcasts which teach patients how to prepare for surgery, and maps which show the location of their appointments.

Under see also you can find additional reading for this step.

Please find a pdf of the PowerPoint slides in the downloads section below.

In the comments below please let us know:

Learn how to plan for and establish COVID-19 testing in your laboratory to ensure accurate, timely and impactful results.