This content is taken from the University of Basel's online course, Statistical Shape Modelling: Computing the Human Anatomy. Join the course to learn more.
View course
3.7

We have seen that the KL expansion allows us to write a Gaussian Process model \(u \sim GP(\mu, k)\) as

Here, \(\varphi_i, \lambda_i, i=1, \ldots, \infty\) are the eigenfunctions/eigenvalue pairs of an operator that is associated with the covariance function \(k\). To fully understand this, advanced concepts from functional analysis are needed. However, if we restrict our setting to discrete deformation fields, we can understand this expansion using basic linear algebra only. Recall from Step 2.2 that if we consider deformation fields that are defined on a discrete, finite domain, we can represent each discretised function \(\tilde{u}\) as a vector \(\vec{u}=(u_1, \ldots, u_n)^T\) and define a distribution over \(\tilde{u}\) as

\(K\) is a symmetric, positive semi-definite matrix and hence admits an eigendecomposition:

Here, \(\vec{\varphi}_i\) refers to the \(i\)-th column of \(\Phi\) and represents the \(i\)-th eigenvector of \(K\). The value \(d_i\) is the corresponding eigenvalue. This decomposition can, for example, be computed using a Singular Value Decomposition (SVD).

We can write the expansion in terms of the eigenpairs \(d_i, \vec{\varphi}_i\):

PCA is a fundamental tool in shape modelling. It is essentially the KL expansion for a discrete representation of the data, with the additional assumption that the covariance matrix is estimated from example datasets. More precisely, assume that we are given a set of discrete deformation fields \(\tilde{u}_1, \ldots, \tilde{u}_m\), which we also represent as vectors \(\vec{u}_1, \ldots, \vec{u}_m\), \(\vec{u_i} \in \mathbb{R}^n\). Note that, as the vector \(\vec{u_i}\) represents a full deformation field, \(n\) is usually quite large. As mentioned before, PCA assumes that the covariance function is estimated from these examples:

Typically, \(v\) is chosen such that \(v \in \{-3, 3\}\), which corresponds to a deformation that is 3 standard deviations away from the mean. Figure 1 shows the shape variation associated to the first principal component for our hand example. 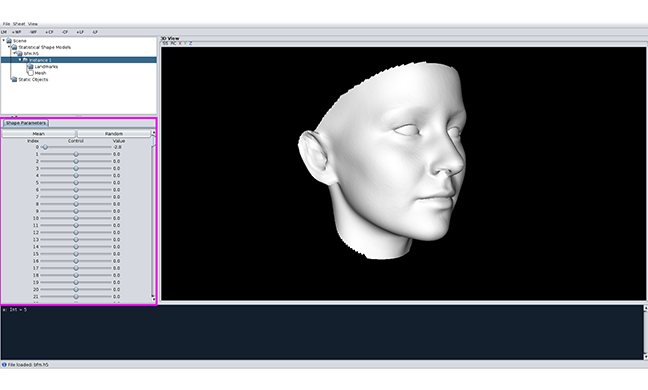