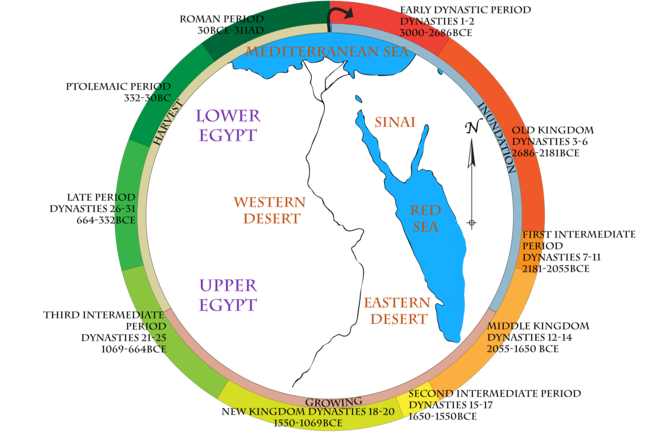 Who were the Egyptians?

Today, Egypt is viewed as a modern state with politically-defined borders enclosing an area of c. 390,000 square miles. However, the reality of where people live is quite different. The majority of Egypt is desert, and so largely uninhabitable. People today live mainly where the ancient Egyptians used to live; areas which can be irrigated by Egypt’s main source of water: the river Nile. It is for this reason that Greek historian, Herodotus, referred to Egypt as “the gift of the Nile”.

The River Nile is the world’s longest river. It is actually the product of two tributaries: the Blue Nile (with its source at Lake Tana in the Ethiopian Highlands) and the White Nile (fed by a number of sources in southern Sudan and central Africa).

The Nile meanders through Egypt as a single stream from Aswan in the south to Cairo in the north. In contrast, the Nile breaks into streams when it reaches Cairo, providing a wider, flatter area of land in a roughly triangular shape, known as the Delta. There are two main branches: the Rosetta to the west and the Damietta to the east.

The Delta region is known as ‘Lower Egypt’ and the Nile Valley is known as ‘Upper Egypt’. These terms are derived from the flow of the Nile, from south to north.

The inundation no longer occurs due to the Aswan Dam system which regulates the flow of water.

As for the geographical surrounding of Egypt, to the west is the Sahara desert, to the north is the Mediterranean Sea, to the east is the Eastern desert and Red Sea, and to the south the Nile acts as a transport highway into the Sudan and central Africa, but at Egypt’s southern end this highway is interrupted by the first in a set of six cataracts: natural rock outcrops that render the Nile impassable at those points.

The People And Their History

All of these natural features offered a degree of unique protection and resource to Egypt, and the people viewed themselves as the centre of a world created by the gods, with a king ruling by divine appointment, and with foreign countries at their disposal.

Our course will begin with the Expulsion of the Hyksos, and Egypt’s arrival into the international arena. However, by this time the Egyptians had already enjoyed a long history, and I recommend you take a look at the following excellent overviews to bring you up to speed if you feel you need to. Both links take you to the Metropolitan Museum of Art’s website: