The super grid of the future

We’ve talked about using the sun as a source of energy, and how we can store this energy produced in batteries or fuels like hydrogen or ammonia.

Even with more and more efficient conversion, high population density and limited available space to place solar cells will be a major challenge as it means there is less solar energy available per person.

On the other hand, if we look at the world map below, we can see massive amounts of sunlight falling in sparsely populated areas. Getting power from these sites to where it is needed is also going to be a huge challenge, due to resistance losses. 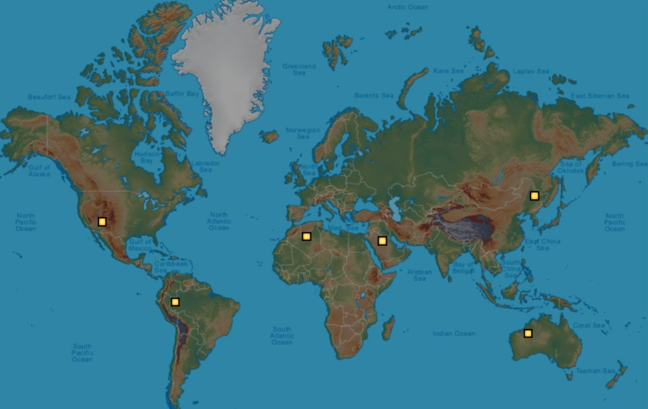 The six boxes on the world map (roughly indicating an area of 240 x 240 km) show the land area required to produce enough photovoltaic for all of humanity.

One ambitious concept that would allow that to happen is to have a massive network of superconductors, which can transmit electricity without losses.

The background of superconductivity

In the early 20th century, as a Dutch researcher, Kamerlingh Onnes, was working to achieve colder and colder temperatures, he was able to liquify helium. Helium has a boiling point of just 4.2 degrees above absolute zero (-268.95 Celsius).

Onnes’s research then continued to look at the electrical resistance in mercury, using this new helium liquid. Here it was observed that the resistance dropped abruptly to zero as it was cooled down to this liquid helium temperature. For his research, he was awarded the Nobel Prize in Physics in 1913.

Another important feature of superconductivity was discovered in 1933, when Walther Meissner and Robert Ochsenfeld saw that superconductors expelled applied magnetic fields, a phenomenon that has come to be known as the Meissner effect. To see superconductivity in action we encourage you to have a look at the video below:

In what ways can this effect be exploited in order to create a more sustainable world?