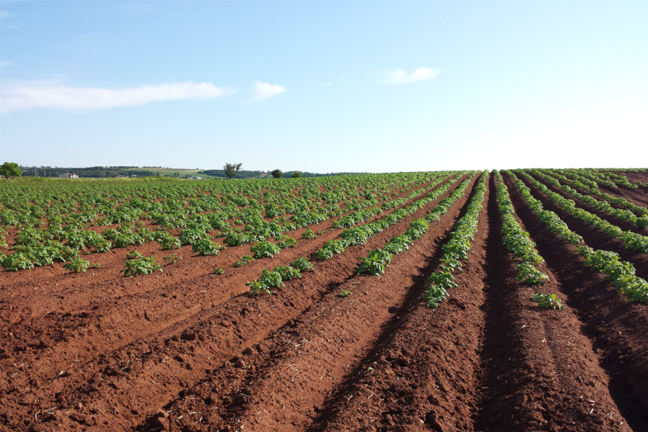 Throughout the course you will be presented with a range of different case studies. The purpose of the case study is to show examples related to the topic. We hope that you will find them both interesting and informative.

In this first case study we will explore the behavior of the natural toxin, atropine in soil and its uptake, translocation and accumulation in wheat. This was recently investigated by Jandric et al., 2013.

Soil is the mixture of organic matter, minerals, gases, liquids and organisms that support a diversity of life. It provides the medium for plant growth; a habitat for many insects and other organisms; acts as a filtration system for surface water; stores carbon; and contributes to the maintenance of atmospheric gases.

Soil health is vital for the ecosystems that depend on it for survival. However, natural and man-made contaminants can exist in the soil which compromise the growth and development of plants and may poison animals and humans. One natural toxin which may exist within the soil is Tropane Alkaloids.

In the plants that produce these natural toxins, the alkaloids can be found in all components of the plant including the stems, leaves, tubers, fruits and seeds and can be potentially poisonous.

The alkaloids can be released from the plant by different mechanisms, including: volatilization, leaching from the plant parts, decomposition of plant residues and root exudation. Moreover, plant seeds are commonly spread over an area of soil when they mature. These seeds, including those from toxin producing plants which contain tropane alkaloids, can remain viable in the soil for more than a century. As a result, viable levels of tropane alkaloids can exist within the soil. Although, the exact amount released from the plant is unknown.

Tropane Alkaloids in the Food Chain

In the soil, tropane alkaloids can gain entry into other plant crops through the root and move into the food chain. For example, wheat is one of the world’s most commonly consumed cereal grains which may be contaminated through the uptake of alkaloid toxins deposited in the soil. The level of contamination in plants may be related to the concentration of the contaminant in the soil, the physiochemical properties of the contaminant, the plant species and the soil type.

Once the toxin gains entry through the root, it can move throughout the plant via the transpiration stream. This presents a human health risk to the consumer if it accumulates in the edible parts of the grain. Subsequently, the plants are consumed by livestock that serve the food supply chain or are harvested for human consumption. The risk of poisoning is dependent on the amount and type of plant tissue ingested and the concentrations of alkaloid compound ingested.

Human consumption of Tropane Alkaloids cause short term adverse effects including: dryness of the mouth, dilated pupils, a change of heart rate, flushed skin, urinary retention and constipation. Typically, symptoms occur 30-60 minutes after consumption and the toxin is excreted from the body from 12 to 48 hours with no long term health effects. However, a dose of 10mg or more is thought to be lethal.

Livestock, such as cattle, sheep and poultry, are also affected by alkaloids. However, they have a esterase enzyme which allows efficient alteration of atropine into a less harmful form. This makes livestock less susceptible to the toxin. Although, pigs are described as a very sensitive animal to datura poisoning from the toxin.

Jandric et al., (2013) carried out a preliminary investigation, using 14C-atropine (as a model for tropane alkaloids) to explore the influence the concentration of contaminant in the soil has on the uptake and translocation of these toxins by wheat. Within the confinements of the study, the uptake of 14C-atropine did not appear to be significantly dependent on the amount added to the soil. Nevertheless, the study provided evidence for the uptake, translocation and accumulation of the natural toxin, atropine and its potentially toxic transformation products in plants. This could potentially cause contamination in the food chain and may increase the overall contaminant load in food or feed, i.e. other contaminants such as mycotoxins, pesticides, herbicides, polycyclic aromatic hydrocarbons (PAHs) and polychlorinated biphenyls (PCBs) may also exist in the soil and transfer into the food chain where it could potentially have a bio-accumulative effect.

The study highlights the complicated process involved in the uptake of atropine by plants and warrants a more detailed investigation to identify and characterise the transformation products; conditions and mechanisms of uptake; and toxicity and bio-availability data before any meaningful risk evaluation can occur.

For establishing regulations for emerging concerns the European Food Safety Authority (EFSA) conducts studies to examine the toxicological properties and occurrence of toxins to form a scientific opinion.

A scientific opinion, Scientific Opinion on Tropane Alkaloids in Food and Feed, EFSA, 2013 has been published on this area. If you would like to read this scientific opinion you can find this in the downloads section below.

This summary outlines the risk to human health of one natural toxin. Please share your thoughts on the bio-accumulative effect of contaminants in our food and feed in the comments section below.