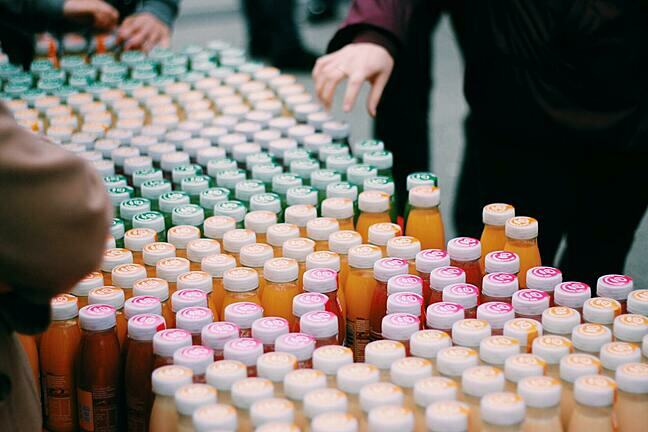 Photo by Aj Alao on Unsplash

How is food labelling changing to help consumers?

Do we get the information we need in a way that helps us choose healthy food?

‘EU citizens are increasingly overweight or obese [1] and therefore more prone to heart disease and diabetes. Part of the problem has to do with our diets. Yet spotting the healthier yoghurt, cereals or ready meal in the supermarket is no easy task. Given that people make their purchasing decisions in a matter of seconds, they need to be able to glean key nutritional information at-a-glance’.

In 2018, in the BBC documentary ‘Britain’s Fat Fight’ [2], chef and food writer Hugh Fearnley-Whittingstall, was surprised to learn that smoothies and fruit juice bottles have as much or even more sugar than a can of Coke. He highlighted the issue that 330ml bottles suggest they represent a single portion when in fact, they contain 2.2 portions. They give the impression that they are a ‘healthy’ product and we end up consuming more sugar than expected. The current recommendation is to not drink more than 150ml of fruit juice or smoothie a day, which is the equivalent of a small glass [3].

Fruit contains a naturally occurring sugar called fructose and eating whole fruit doesn’t add to your sugar intake while drinking fruit juice or smoothie does. This is because whole fruit contains fibre which helps to slow down the speed at which the fructose is absorbed into your blood stream. When fruit is blended or juiced, natural sugars are released from within the cell walls and become ‘free sugars’ [4&5].

There is a debate about whether portion sizes on-pack should represent what people consume or what they should consume [6]. Campaign group ‘Action on Sugar’ is demanding mandatory front of pack labelling which clearly states the free sugars on all products [7&8].

As you saw in Step 2.10, products can carry both nutrition and health claims. The regulation [9] proposed that foods bearing these claims, should carry ‘nutrient profiles’. The European Commission defines nutrient profiles as,

‘thresholds of nutrients such as fat, saturated fat, salt and sugar above which nutrition claims are restricted and health claims are prohibited, thus preventing a positive health message on food high in these nutrients’ [10].

In simple terms, nutrient profiles would work like filters: they are the criteria that determine whether a food product can bear a nutrition or health claim. Due to the complexity of discussions, EU nutrient profiles have not yet been set. We currently see products like cereals making claims about vitamin content while they are high in sugar, or chocolate snacks claiming to be a ‘source of calcium’. In these instances, the claim would be accompanied by a disclaimer such as, ‘high in sugar’.

We asked BEUC about this issue and they said:

‘The original intention of setting nutrient profiles is to prevent claims being misleadingly used with foods which are high in nutrients of concern such as sugar, salt, and fat. Consumers should no longer be misled by claims which disguise sugar-laden snacks or yogurts as healthy options. That is why BEUC strongly supports the urgent setting of nutrient profiles for the use of nutrition and health claims for food products. We welcome the EU Commission’s commitment to finally setting ‘nutrient profiles’, as announced in its Farm to Fork strategy in May 2020. Nevertheless, with such profiles more than ten years overdue, it is regrettable that no proposal will see the light of the day until the end of 2022’.

This video from BEUC calls on the EU Commission to tackle misleading food claims.

As you saw in Step 2.3, including ‘at a glance’ nutritional information on front of pack labelling is still voluntary. However, the Nutri-Score labelling system which originated in France, is becoming increasingly common in Europe and is recommended by public health authorities as well as being adopted by major food companies including Nestle and Danone [11].

The Nutri-Score converts the nutritional value of food into a simple overall score, based on a scale of 5 colours and letters: A is green to represent the best nutritional quality while E is dark orange to show it’s the lowest. The score is calculated by taking into account both the nutrients to limit (calories, saturated fat, sugars and salt) and the nutrients/food types to favour (fibre, proteins, nuts, fruit and vegetables). The food is assigned a colour and letter based on the resulting score, calculated per 100g or 100ml [12].

BEUC is in favour of this system:

‘research [13] conducted in several countries shows Nutri-Score is currently the best-performing scheme in both aiding consumers to compare the nutritional quality of foods across a range of products and to make healthier purchasing choices in the supermarket. That’s why we have been asking the EU Commission to come forward with a legislative proposal to make Nutri-Score mandatory EU-wide.

This video from BEUC argues the case for mandatory colour-coded information on the front of pack labelling.

There is still a debate within the EU on what these labels should look like. Italian health authorities created the NutriInform Battery Label, which focuses on five components: calories, fat, saturated fats, sugar, and salt. Rather than offering a score, the Battery Label lists the quantity of each component and calculates the percentage of the daily recommended value provided by the food.

In July 2020, the UK government unveiled a new obesity strategy. Some of the measures include a consultation on front of pack nutritional labelling to see how it compares to international examples and a consultation on alcohol calorie labelling, as the majority of the public is unaware of the calorie content of common drinks [14]. There will be also a new legislation making calorie labelling on menus for food and drinks in cafes, restaurants, bars and takeaways compulsory for all business with more than 250 employees [14].

Is there more that our governments should be doing to protect us, as consumers, through labelling regulations? Please share your ideas in the comments section below and like ideas from other Learners that you agree with.