by Australian Institute for Innovative Materials

by Australian Institute for Innovative Materials

Ahead of the free online course “Bioprinting: 3D Printing Body Parts“, lead educator Gordon Wallace of the Australian Institute for Innovative Materials, discusses two revolutionary developments in 3D bioprinting and looks ahead to what the future might hold. 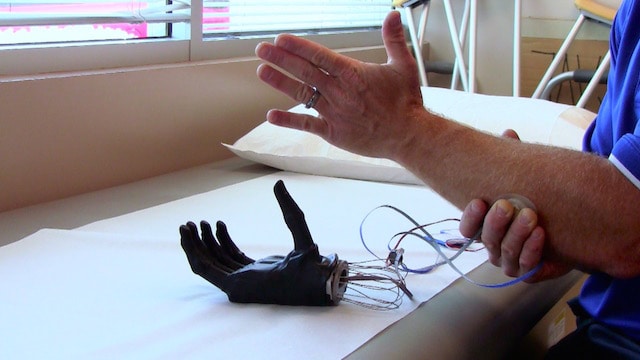 The world of biomaterials has collided with advances in 3D printing recently.

Bioprinting a bronchus for baby Kaiba

In late 2011, a boy was born with a rare and life-threatening birth defect. His name was Kaiba and his left bronchial tube was so weak that, when he was just six weeks old, it collapsed. He stopped breathing. His parents rushed him to the hospital, where he was resuscitated.

Over the next few weeks, the attacks continued to occur and Kaiba’s parents were told that, without help, his airway would never grow strong enough to allow for normal breathing. Kaiba’s doctors then took an extraordinary step. They contacted researchers at the University of Michigan who were at the forefront of the new science of tissue engineering.

Jumping on board, the scientists took a CT scan of Kaiba’s airways and used the data to print a replica cast in three dimensions. With this cast, they could create a flexible, biomaterial sleeve, which was a perfect fit for the infant’s bronchus. The material they used was designed to dissolve in the body. It would give the boy’s bronchus time to grow strong, but disappear within three years, without needing to be surgically removed.

In January 2012, the 3D-printed sleeve was implanted into Kaiba, and now he has the strong breathing of a healthy boy. This incredible story is an early example of a new clinical paradigm in biomedicine: 3D bioprinting.

Another incredible story is that of Richard van As – a South African carpenter, who lost all four fingers on his right hand in a woodworking accident in May 2011. Dismayed by the lack of affordable prosthetics available, he decided to invent his own.

A subsequent partnership resulted in “Robohand” – a 3D-printed hand, created using “household” 3D printers and ABS plastic. Where custom-fitted prosthetics can cost tens of thousands of dollars, Robohand costs only $200 in materials.

3D printers give individual inventors their very own manufacturing platform. This may be one of the most lasting impacts of the technology, as it allows anyone with a good idea to compete.

Can we 3D print a human organ?

Can you imagine an operating theatre with a printer in the corner printing out an organ?

In the future, there is the possibility of using 3D printing technologies, together with advances in stem cell research, to use patients’ own stem cells to print functioning organs for transplant, such as kidneys, livers or hearts.

Printed organs have a number of important advantages over donated organs: there is no risk of the transplanted organs being rejected and the process could provide viable organs that are the appropriate size for children.

What to know more about how 3D printing is revolutionising healthcare, both now and in the future? Join the free online “Bioprinting: 3D Printing Body Parts” now.