Discover how virtual and physical models of the Baths of Caracalla help bring Ancient Rome to life, in this guest post by Professor Matthew Nicholls, the educator on our ‘Rome: A Virtual Tour of the Ancient City’ course. 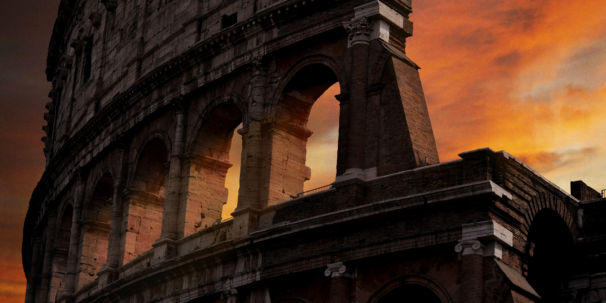 You may think of Rome as a city of grand monuments, home to the Forum, Colosseum and Pantheon – buildings which held thousands of Romans, cheering gladiatorial combats, where celebrated and feared emperors plotted the expansion of their empire, and where their subjects worshipped the gods.

But behind these spectacular structures, Ancient Rome was also a living, breathing, working city. 3D models allow you to celebrate these famous monuments and also explore the housing, aqueducts and sewers that supported ancient Rome’s million or so inhabitants.

Rome wasn’t built in a day, and neither was this virtual model. Recreating thousands of buildings has taken many years of painstaking research. I set out to make sure every virtual structure was as historically accurate as possible.

To achieve this, I had to draw on multiple historical artefacts and sources including coins, marble maps, inscriptions, literary works and, of course, the ruins themselves.

It’s been a pleasure to bring these 3D models to a worldwide audience with FutureLearn, in my Rome: A Virtual Tour of the Ancient City course, since 2016. The course blends the models with footage we filmed in Rome, together with in-depth articles, discussions and quizzes so you can immerse yourself in the ancient city.

More recently, three of the digital models were the basis of physical models featured in the ‘Veni Vidi Batî’ exhibit at the new Narbo Via museum in Narbonne.  It’s been fascinating to compare the remains of ancient Roman architecture, with the reconstructed detail of the virtual models and to see the same architectural design principles embodied in these physical models.

To explain more, it’s best to focus on a single example.

The Baths of Caracalla

Built in the early third century AD by Emperor Caracalla, the Baths of Caracalla are a large imperial bathhouse, made using huge volumes of brick and concrete, and a lot of manpower.

Bathing was a daily ritual enjoyed by many Romans, not just the rich, and thousands of people would have used this enormous building at any one time. Apart from the chance to get (relatively) clean, Roman bathhouses offered places for sport and recreation, food, and conversation.

Emperors often created grand buildings to gain favour and popularity with the public.  After murdering his brother to gain sole rule, Caracalla inherited an empire after a civil war which had left Rome in a state of some decay and dereliction.

Caracalla saw an opportunity to make his mark and gain favour. Building a bathhouse to win the affection of the Roman population was an established pattern, and by creating this bathhouse, Caracalla was adding to a sequence of great imperial bathhouses built by previous rulers like Titus and Trajan.

The Baths of Caracalla is the second biggest and best-preserved of the ancient Roman bathhouses.

The best way to explore the bathhouse (apart from visiting it in Rome!) is to explore the structure in a 3D model. You can place yourself in the centre and walk around to view it from multiple angles.

What you’ll see is a central bathing block containing huge, vaulted halls and pools, fed by their own dedicated aqueduct. This was surrounded by a garden space and an outer ring of buildings with statue galleries, meeting halls, athletics venues, and perhaps even libraries.

For those of you who enjoy statistics – this enormous complex was made up of five million bricks in the foundations alone, 20,000 cubic metres of concrete in the vaults, and over 6,000 squared metres of marble for decoration.

It took over 9000 Romans labouring every day for five years to build it – in every way, it was intended to be a marvel of construction, power, and resource.

A digital model is editable, flexible, navigable, transmissible, sharable and therefore a hugely powerful educational tool. Not only does it help to show how vast this ancient city was, but it also allows us to zoom down into the finer details such as the textures and decorations on individual buildings.

In the case of the Baths of Caracalla, exploring the 3D model will let you enjoy the contrast between the gardens and the large buildings of the central bathhouse, providing an idea of the scale of the spaces.

Watch this video of the digital model of Ancient Rome

Each model on the course is supplemented by a walkaround tour video (for those who are unable to navigate the model) as well as articles and discussions, so you get a real sense of how each building would have functioned.

The Baths of Caracalla in the City of Rome

As it’s outside the city centre, the Baths of Caracalla doesn’t often feature in tourist ‘must visit’ lists, but it’s a fantastic site to visit and I enjoy taking my students there. The structure stands at about 80ft in height so you can gain a sense of the scale and layout of the buildings.

However, the roofs, windows, gilded bronze statues, and of course, the water, are all gone. I like that combination; where there’s enough to indicate what the building might have been like, but you’re required to exercise some thought and use your imagination to put the ruins back together in your mind.

From digital models to a museum exhibition

The Baths of Caracalla model, along with the Pantheon and the Forum models featured in the exhibit ‘Veni Vidi Batî’ at the new Narbo Via museum. It showcased how architectural design principles were embodied both in ancient Roman architecture and in modern buildings. The models were reconstructed by the museum’s architects, Foster + Partners, in their modelling studio.

I’m naturally a digital model champion but it was fascinating to participate in this process. And particularly thrilling to watch museum visitors interacting with the physical models as they would with the virtual ones.

They were walking around the model, bending down to see it from different angles and peering inside – just like you can do with the digital versions.

It was fantastic to witness in person what I hope FutureLearners are doing ‘virtually’ from the comfort of their own homes on Rome: A Virtual Tour of the Ancient City.

You can join anytime, and I look forward to reading your comments in the Baths of Caracalla or one of the other nine models during the next facilitation period on the course – that’s from 24 October to 27 November this year.