Learn about the impact coronavirus has had on the creative industries and media, leading to shutdowns and suspensions of events worldwide. 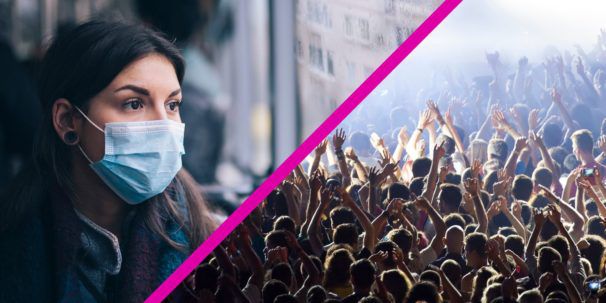 The effects of coronavirus are having a devastating impact on health services around the world. Beyond the immediate threat to life, COVID-19 is also laying waste to the cultural schedule, forcing cancellations and suspensions of some of society’s biggest cultural events.

Major concerts and festivals such as Glastonbury have been cancelled. In South Korea, K-pop concerts have been suspended, while Country to Country, which is normally held in three separate locations (London, Glasgow and Dublin) has been postponed.

In the sporting world, Euro 2020 has been put on hold for a year, and all footballing fixtures put on hold until further notice. The Japanese government still insist the Tokyo Olympics will go ahead, although it looks more in doubt with every new announcement of travel bans and closed borders.

Green Day are among the musical artists who’ve moved to postpone tour dates. They were set to perform in Singapore, Thailand, the Philippines, Hong Kong, South Korea and Japan. Instead, they will begin their tour in California on 25th April, but of course, that too is subject to change if the virus continues to spread.

Most recently, Eurovision has announced its intention to suspend – for the first time – the 2020 edition of the beloved pop competition until next year.

The movie industry has also been scrambling to respond. The Chinese premiere of the new Bond film ‘No Time to Die’ was cancelled, along with the planned accompanying red-carpet tour. Sonic the Hedgehog, Little Women and 1917 are also among those whose Chinese premieres have been delayed, with no indication of when they will go ahead. The uncertainty of how long it will take to contain the virus has been a huge knockback to the film industry.

It’s true that these are big-budget films, have the backing of film studios and access to large amounts of money, but when the investment in a film isn’t recouped in tickets sales, this can quickly affect the budget for further productions. Future ticket sales could even be increased to recover losses, but as people may be reluctant to pay more, the losses could have a negative impact on the future of the film industry.

The television industry has been similarly affected. Netflix have announced the suspension of all productions, while the BBC has put its dramas on hold, including suspending Eastenders for the first time in the soap’s history.

Many people working in the arts rely on these events for a large proportion of their income or to supplement their freelance earnings. How governments respond now to the closing of venues and media productions could determine their future prospects once the virus is under control.

It’s well-known that literary festivals are a vital source of income for authors across the globe. Yet book festivals and fairs have followed the trend and announced suspensions across the board.

This year’s Oxford Literary Festival has been cancelled, along with the London Book Fair. Meanwhile, the Strand Bookstore in New York has also been shut down.

Some art galleries rely on both funding and paintings being sold, in order to remain open. With people self-isolated because of Coronavirus, this causes a reduction in the numbers of any ticket sales, art sales or people attending associated events which might have bought in much-needed cash.

We’ve seen high-profile art galleries and museums shutter their doors in recent days, including the Wellcome Trust, the V&A, and the Tate Galleries. In New York, all museums – including the legendary MOMA art gallery – have closed indefinitely.

These are just a few of the ways Coronavirus is impacting movies, arts and other cultural events. Although containing the virus should be the number one priority, the effects on the cultural industries will felt long after the threat to our health is over.

If you want to know more about the coronavirus, we have partnered with leading health experts at the London School of Hygiene & Tropical Medicine on the free online course, COVID-19: Tackling the Novel Coronavirus.

We also have a variety of online courses exploring different aspects of the arts; from An Introduction to Screenwriting to Innovation: the Fashion Industry, and everything in-between. Explore our creative arts and media selection and find the course to get you through coronavirus shutdown.