Elizabeth – from Kosovo-based charity, The Ideas Partnership – was another winner from our recent FutureLearn flag giveaway. The flag is flying at the charity’s free learning centre in the impoverished Neighbourhood 29 of Fushe Kosove, Kosovo. Here, Elizabeth talks about why education is at the heart of her valuable work. 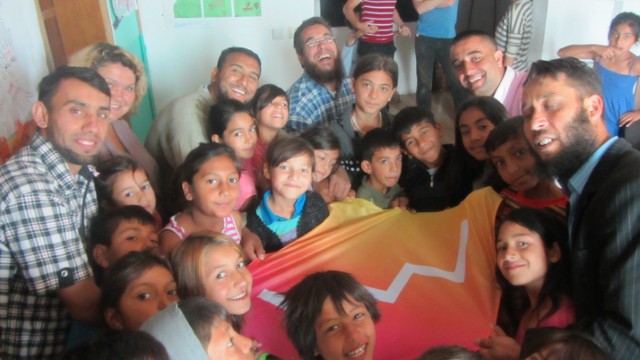 “The Ideas Partnership was founded by me and my partner, Robert Wilton, and our Kosovan friend, Ardian Arifaj, in 2009,” says Elizabeth. “Our work in Fushe Kosove started in 2010 and really gained momentum when I met a girl named Gjelane who was then nine years old.

“She told me that she wanted to go to school but that she was now too late. I couldn’t believe she was telling the truth, but research with the local school and the Ministry of Education revealed that the system did indeed not provide for children who were late for registering for school, and that there was no option for her.

“Visits to other homes in her community found a total of 62 children in the same situation. So we began our work teaching these children and lobbying for them to be allowed into education.”

Since then, these children, as well as 230 others, have been registered into school. Elizabeth says it is one of the charity’s biggest achievements. The charity has expanded into five municipalities and now works with adult learners too, to give them the skills both for employability and to work with their children to break the poverty cycle.

Elizabeth tells us that she finds FutureLearn’s model of free online courses inspiring. When learners at the centre saw the flag, and FutureLearn was explained to them, they were surprised.

“In a country like Kosovo where university education is big business, there was incredulity at the idea of free courses of this kind,” she explains.

The photo above shows a group of learners from the centre. The children come from the poorest community in Kosovo and the charity not only helps them get into school, but also works to keep them there. The adult learners in the photo – Hysni, Jashar, Bekim and Sadush – attend evening classes to get their high school diploma – something they missed out on as a result of war and poverty during their education.

“Our charity pays for the costs of the evening class, and in exchange they give their time on Saturdays to support the learning of the next generation,” says Elizabeth.

Want to know where else FutureLearn flags flying? View our map of the world.