As our new course Disaster Management: Introduction to Humanitarian Aid gets going we have a look at one of the key figures in the history of humanitarianism: Henry Dunant. 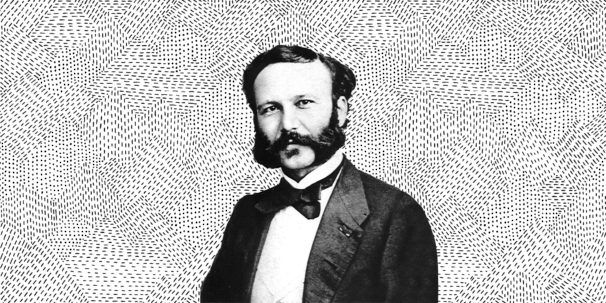 When you think of a famous humanitarian who do you think of? Gandhi? Desmond Tutu? Mother Teresa?

But maybe you should be. Henry Dunant, joint recipient of the first ever Nobel Peace Prize, founder of the International Red Cross and a key proponent of the Geneva Conventions, might well be the father of modern humanitarianism as we know it today.

Who was Henry Dunant?

Henry Dunant was born in Geneva in 1828 to devout middle class parents that were committed to helping those less fortunate than themselves. Passing these values to their son, young Henry grew up involved in religious activities (including working for the YMCA) before taking up an apprenticeship in a bank when he was 21.

In his twenties he travelled abroad with a company attempting to settle Swiss nationals in Algeria. During his trip he wrote his first book which featured his travel observations, though one chapter stuck out – a meditation on slavery.

Following his travels he decided to start a business trading and growing corn in the colonies, and was assigned land in Algeria. But his endeavours floundered when it came to accessing rights to water, so he decided to march his problems all the way to Napoleon III, despite the emperor being on the frontline of the battle to force the Austrians out of Italy.

Dunant took his case to Napoleon’s headquarters in Italy but arrived only to encounter the aftermath of the bloody Battle of Solferino; refusing to remain a witness to the despair Dunant attempted to provide aid to those who desperately needed it.

Thousands died, tens of thousands were wounded, and at 31, the chaos and brutality of conflict proved an awakening for Dunant.

3 years later he published his second book ‘A Memory of Solferino’, not just a reflection on the nightmare he’d witnessed but a plan, the beginnings of the International Red Cross. He suggested that all the nations in the world should create ‘relief societies’ to give care to those in war. They should be staffed by trained volunteers and governed by the nation’s leading figures.

A year later the Geneva Society of Public Welfare appointed Dunant and several others to investigate making his plan a reality. They called for a conference of as many countries as possible and Dunant began to travel once more, seeking promises from governments to send representatives. In October 1863 he and his companions efforts were rewarded with a conference featuring 39 representations from 16 nations – with 12 eventually signing a treaty commonly known as the Geneva Conventions. This promised that medical staff would be considered politically neutral and nations would send supplies to them in times of crisis. Its symbol? A red cross on a white background.

This young man from Geneva had achieved something remarkable: he had united countries in a common goal. But despite his achievements he did not prosper – his commercial project (developing the land he’d been granted) failed, he ended up bankrupt and alone: cast out from Genevan society and living in a hospice due to illness. Humanity seemed to have forgotten to thank its champion.

Only later was he discovered by a teacher in the Swiss village he had settled in. And over several years was he finally recognised, receiving rewards and the first ever Nobel Peace prize jointly with pacifist Frederic Passy in 1901. Yet he remained in the hospice for the rest of his life, spending none of his prize money and leaving it all to humanitarian causes when he died in 1910.

It’s thanks to Henry Dunant we have not only the International Red Cross and the Geneva Conventions but the many humanitarian efforts these inspired – these are the systems that protect and preserve us in times of great crisis. He proved that one person can turn horror into hope.

(p.s. you can find out more about the history of humanitarianism in Week 1)