Find out more
Home Lips and teeth: weaving the “tangled skein” of Korea and China’s history
Published on April 21st, 2015

Korea and China are often described as being as inseparable as “lips and teeth.” This saying was the inspiration for the free online course, “Lips and Teeth: Korea and China in Modern Times.” Here, lead educator, John Delury of Yonsei University, discusses what to expect from the course. 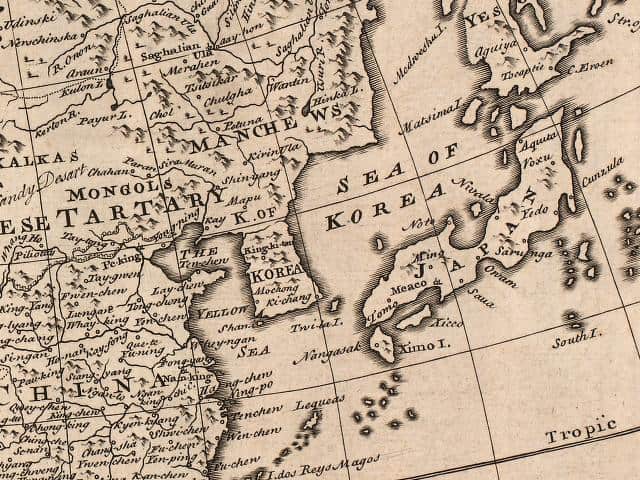 Illuminating history with the flash of light created by war

The main focal point, and angle of study, for “Lips and Teeth” is war. Although this course is not a military history per se, we use the history of conflict on and around the Korean Peninsula to illuminate, through the sudden flash of light created by war, the nature of the China-Korea relationship over time.

The first war takes place in the 1590s, when China helps Korea repulse a Japanese invasion.

The second war takes place in the 1890s, when China fails to stop a Japanese invasion of not only Korea, but also China’s own northeast provinces.

The third war, probably most familiar to you, occurs in the 1950s, when China pushes an American-led military coalition out of northern Korea, and re-establishes the division of the Korean Peninsula at the 38th parallel.

So, three wars, like flashes of light in a night sky, will reveal fundamental features of Lips and Teeth.

Taking the long view of Chinese and Korean relations

But our course is not just about battles. We will also take the long view of how China and Korea interacted during the two centuries of relative peace, in between the Manchu invasion of Ming China in 1644 and the British invasion of Qing China in 1839 (better known as the First Opium War).

Having studied the Sino-Japanese War of the 1890s and Korean War in the 1950s, we will examine the fragile peace of the Cold War and current era. The action here is diplomatic and economic, rather than military – although the danger of conflict spiraling out of hand is never far away.

Meeting colourful men and women of Chinese and Korean history

We will also meet some of the most colorful men and women of Chinese and Korean history: tough, ingenious generals like Yi Sun-shin and Peng Dehuai; refined Confucian scholars like Pak Che-ga and Huang Zunxian; romantic reformers like Ahn Jung-geun and Sun Yat-sen; and cunning, brutal leaders like Mao Zedong and Kim Il Sung.

You will have a chance to peer into original records of the past, the primary sources from which scholars weave the “tangled skein” of history, as Henry Adams called it, into a meaningful pattern – a tapestry.

Hopefully you will find answers to questions that feed your curiosity about China and Korea. But be forewarned: the most powerful gift that historical knowledge provides is the capacity to ask better questions.

The course will, of course, impart knowledge, but we will also use the knowledge acquired in order to ask new questions, and create a space in which you can discuss and debate those questions with your fellow students.

You can join “Lips and Teeth: Korea and China in Modern Times” now or join the conversation using #FLlipsandteeth.