Find out more
Home What are the signs of depression?
Published on September 16th, 2020

The subject of mental health is an important one. Whether you’re struggling yourself or know someone who is, understanding the signs of depression and what to do about them can be helpful. 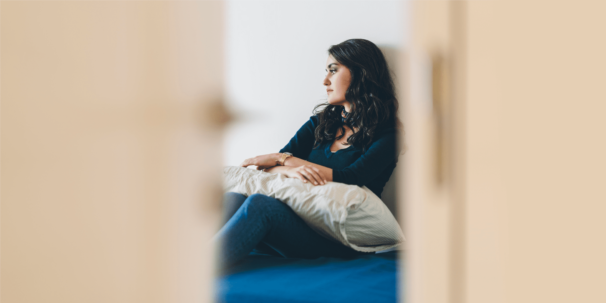 Taking care of your mental health is an essential part of life. Over the last few decades, we’ve come to appreciate just how important our mental wellbeing is, and we are better at assessing and protecting it. But it’s not always easy to do so. To help give you a deeper understanding, we take a look at what the signs of depression are.

As well as looking at these signs, we’ll also explore what depression actually is, what causes it, how it affects people, and how we can treat it. It’s a topic that deserves understanding, whether it affects you or someone you know.

Depression is a condition that’s often misunderstood. People sometimes use phrases similar to ‘I’m so depressed right now’ when they’re feeling sad about something. And, of course, we all have days where we’re feeling a little down, unhappy or fed up. However, neither of these situations accurately describes depression. It’s a medical condition with a range of different symptoms.

Depression is a mood disorder that affects the way you feel, think, and act for prolonged periods. It can make a person feel disconnected, lose their interest in the things they love, and impact the way they function at work or home.

Despite what some people may claim, depression has been around for many years. Although it’s only relatively recently that we’ve understood it, the condition has appeared throughout human history.

The history of depression has its roots as far back as the second millennium BCE. The ancient Mesopotamians believed it was a spiritual condition caused by demons. The ancient Romans and Greeks called the illness ‘melancholia’, a name that would stick around for many generations. They blamed it on an imbalance within the bodily fluids (known at the time as humours).

Treatments in ancient times varied from the barbaric to the more practical, such as diet, exercise, and therapeutic methods. Sadly, by the Middle Ages, the condition was once again placed in the realm of the spiritual. As with many mental illnesses, demons, witches, and devils were blamed, and exorcisms, burnings, and drownings were administered.

The 18th and 19th centuries often weren’t much better. Depression and those who suffered from it were treated as something that should be shunned and isolated from society. It was only towards the latter part of the 1800s that attitude softened, and science started to find answers.

Through the 1900s, psychology and medicine rapidly changed our understanding of depression. Thoughts, behaviours, and biological factors were all attributed to the illness. Our definitions and treatments changed too, and we now have a better understanding of and approach to depression than ever before.

There are several different types of depression. Understanding the differences can make it easier to identify and treat the illness in the most effective way. Usually, the various types are understood based on the symptoms and the severity:

Anxiety and depression are two of the most common mental health conditions in the UK. Although there are similarities between the two, they are separate illnesses. Many of the symptoms overlap, particularly when it comes to things like sleep problems, concentration, and fatigue. If you think you are suffering from either disorder, you should contact your GP for a proper diagnosis.

How many people have it?

Depression is one of the most common mental disorders in the world. The World Health Organisation estimates that over 264 million people across the globe suffer from some form, making it the leading cause of disability worldwide. You can take an online test for depression if you think you may be suffering from depression.

In the UK, a 2014 study showed that 19.7% of the population showed symptoms of depression or anxiety. Numbers were higher among women and girls than men and boys, which is a trend often seen with the illness.

UK figures also show that those facing social inequality, discrimination, social exclusion, as well as those going through trauma or with differences in physical health, are often at a higher risk of experiencing mental health problems.

Depression is a complicated condition and one that’s often misunderstood. Popular belief often suggests a number of unhelpful causes for depression. The idea that it’s ‘all in the mind’ or something you can ‘just get over’ are particularly damaging.

In reality, there are several factors that could cause depression. What’s more, although two people may be displaying similar symptoms, the causes (and treatments) could be entirely different. We’re not going to dive into the detailed science of what causes depression. Instead, here are the basics of some of the contributing factors:

What are the signs of depression?

The signs of depression come in many forms, which can sometimes make it difficult to spot. What’s more, some of the symptoms could be linked to other medical ailments, which means it can take time to narrow it down. There are often both physical and mental signs of depression, as we’ve covered in more detail below:

There are several common physical signs of depression that can often leave a person feeling drained and out of sorts. These include things like:

When it comes to the mental signs of depression, these feelings are usually prolonged, lasting more than two weeks. Symptoms include:

What are the effects of depression?

When left untreated, depression can impact many areas of a person’s life. As we saw with the signs of depression, there are both physical and psychological symptoms an individual may experience. Yet there are also other ways in which this illness can affect people:

People suffering from prolonged and untreated depression may be at risk of several adverse effects on their health. These often depend on the severity and length of the illness, but can include:

It’s not just the physical, emotional, and psychological areas where people suffer from depression. Many of the symptoms can have broader consequences on a person’s life:

Research has long established a link between chronic stress and depression. In the midst of the coronavirus pandemic, many people are finding it difficult to cope. According to a survey from the Office for National Statistics, nearly 20% of adults in the UK were experiencing some form of depression during June of the pandemic. This rate is nearly double what it was beforehand.

Clearly, it’s a difficult time for many people. As such, it’s never been more important to take care of your mental health and wellbeing. If you are experiencing symptoms of depression for more than two weeks, you should seek help from your GP.

Helping young people manage low mood and depression is particularly important during this time. The upheaval and change to everyday life mean that young people’s mental health may be particularly vulnerable.

How to treat depression

Depression should only be diagnosed and treated by a medical professional. That being said, it’s always useful to know some of the approaches that are common when treating the illness. Usually, the treatment process is a combination of self-help, therapy, and/or medication.

Often, exact treatments depend on the severity and signs of depression. These can include:

For those with mild symptoms, a GP may suggest a period of watchful waiting to see if symptoms improve. Talking through feelings during this time can help, as can things like exercise. The NHS also lists several mental health apps that can help.

Treatments such as cognitive behavioural therapy (CBT) and counselling are often useful for those with mild to moderate depression. These therapies often involve addressing and understanding thought patterns and behaviours. Some methods, such as interpersonal therapy (IP), focus more on relationships and communication.

Antidepressants are medicines used to treat the symptoms of moderate to severe depression. Doctors prescribe these tablets to help tackle the various symptoms, and they vary in terms of dosage and length. There are many different types available.

For some individuals, a GP may recommend a combination of all of the treatments listed above. Often, antidepressants and CBT are more effective together than alone.

How to help someone with depression

People often wonder how they can help a friend or loved one with depression. It’s not always easy to know what to do or what’s helpful to those who are suffering. Your instinct might be to offer advice or to try and ‘fix’ them. However, this approach isn’t particularly useful. Remember, depression is a serious illness that often requires medical help.

Although you can’t directly treat someone suffering from depression, you can support them while they’re vulnerable. There are several things you might want to try:

Be there for them

Your friend or loved one might need you to just listen to them. You can mention that you’re concerned about them, that you’ve noticed the signs of depression, and that they can talk to you if they need to. Don’t be pushy, but encourage them to share their feelings if they want to. Listen in a non-judgemental way and don’t compare their experience to yours. Instead, show empathy and validate their feelings.

Help them to find help

Taking the step to seek help isn’t always easy, particularly if the person is feeling unmotivated and helpless. You might want to support them in making a doctor’s appointment and seeking therapy.  Similarly, they may need your assistance with some everyday tasks that they’re finding particularly hard. Make sure your friend or loved one knows you’re there, but only if you’re certain you can follow through with your offers.

Make sure to keep inviting your friend to the usual social activities they used to enjoy. Don’t pressure them into coming, but instead let them know that they’re always welcome when they feel like it. Patience is key when helping someone with depression, as the road to recovery can sometimes take a while. Try and not get frustrated with them and keep them in the loop with your social circle.

Understanding this condition can help you spot the signs of depression and be more helpful to the people you care about. Whether it’s by taking one of our anxiety and depression courses or finding organisations that can provide more information, learning more can always help.

If you or someone close to you is showing signs of depression, there are plenty of resources and organisations that can help. Remember, it’s important to seek professional medical advice first. You can also check out some of the following places: