The trigger for Britain's declaration of war. In this article, Dr Jenny Macleod and Dr Nicholas Evans examine tensions.
© University of Hull

After weeks of tensions following the assassination of Archduke Franz Ferdinand in Sarajevo on 28 June 1914, the trigger for Britain’s declaration of war on 4 August 1914 was Germany’s invasion of Belgium.

Since the 1839 Treaty of London, Britain had been the guarantor of Belgian neutrality, bound to intervene if it were invaded. Consequently, once Britain went to war, speeches and propaganda posters celebrated Britain’s commitment to the rights of small nations and the upholding of treaty obligations. A contrast was drawn between the moral commitment of Britain, and German disregard for such standards, particularly after the German Chancellor, Theo von Bethmann Hollweg, reportedly dismissed the treaty’s importance as a mere ‘scrap of paper’. Yet once the decision was made to raise a mass army in Britain, the truth was that this was rather an abstract justification for asking hundreds of thousands of ordinary men to step away from their own domestic obligations and risk their lives. Events in Belgium would rapidly furnish far more emotionally powerful demonstrations of the need to fight against Germany.

Why had Germany invaded Belgium? As the diplomatic crisis unfolded during July 1914, a web of alliances drew the major European powers into an international row that had started in the Balkans. Germany’s role in this complex situation involved sending ultimatums to both France and Russia. These two allies partially encircled Germany, and in response to this strategic weakness, Germany had formulated the Schlieffen plan as long ago as 1905 in order to be able to wage a war on two fronts. Before turning to face what were assumed to be slow & lumbering Russian forces, the plan aimed to swiftly knock out France first. It envisaged a rapid and powerful blow, facilitated by taking an unexpected invasion route through Belgium, thereby avoiding France’s main defences. In consequence of the pressing need for speed, when the Schlieffen plan was put into action in August 1914, the German army would accept no resistance in Belgium.

As the German army pushed through Belgium and into northern France it executed more than 6,000 civilians, mostly men of military age who might have been able to fight back, but also some women and children. Buildings were set on fire, including the University Library at Louvain. Rheims Cathedral was shelled. The Hull Daily Mail reported ‘An Atrocious Deed’ to its readers on 29 August 1914:

The Germans have committed an atrocious act which will turn the hands of every civilised nation in the world against them. They have utterly destroyed the peaceful and historic old city of Louvain, the Oxford of Belgium. The beautiful Hotel de Ville – a wonderful example of pointed Gothic – the stately church of St. Pierre, the famous University, all are gone. Even the library of 70,000 volumes and priceless manuscripts was committed to flames by the ruthless barbarians who have set forth to spread “German culture” throughout the globe.

Note how the admiration for German culture has been turned on its head in this newspaper extract. It was not just buildings and belongings that were targeted. There were executions, massacres, rape and hostage-taking. The German army had been led to fear that civilians would fight back and believed that such resistance was illegal, and therefore the execution of perpetrators was righteous. Yet where sniping was perceived to have come from a house, the response was to destroy not just one building but an entire village. As many as 20,000 buildings were destroyed, often through punitive arson, and in the town of Dinant as much as 10% of the population was killed. 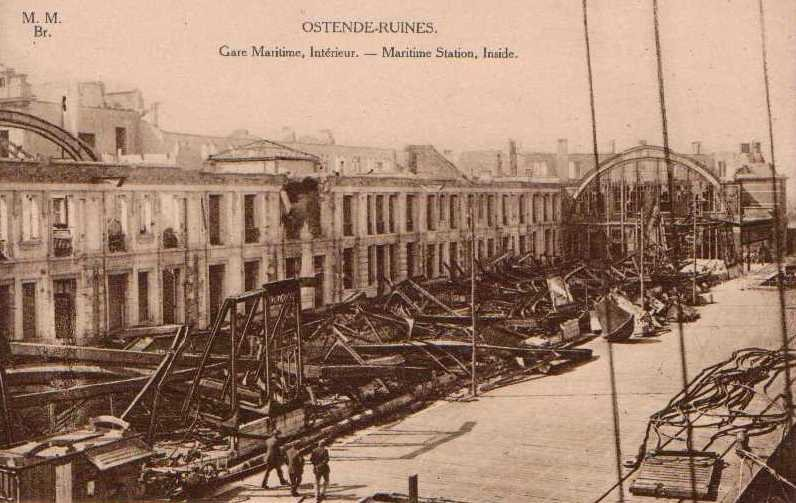 A propaganda postcard illustrating the physical damage to the railway station at Ostend on the Belgian coast – just a short sea journey away from England. Note that the caption is in two languages, perhaps whoever created the postcard hoped to raise sympathy from allies in both France and Britain.

If the reality of death and destruction was not bad enough, these widely reported events became subject to lurid exaggeration. Propaganda depicted women and children as the most frequent victims and framed the Germans as an uncivilised, horrifying threat.