What are the Mechanisms of Antimicrobial Resistance?

In this article, we explain the mechanisms of bacterial resistance to antibiotics.
© Wellcome Genome Campus Advanced Courses and Scientific Conferences

The mechanisms of resistance can be broken down into the following:

Figure 1. Schematic of a β-lactamase enzyme degrading penicillin into fragments; chemical structure of penicillin with the β-lactam ring highlighted

Two other mechanisms of resistance are mediated by bacteria acquiring enzymes. Firstly, bacteria can acquire enzymes that chemically modify the target of the antibiotic in the bacteria by adding additional chemical groups. An example of this is the erm (erythromycin ribosomal methylation) gene that provides resistance against macrolide antibiotics like erythromycin. This enzyme methylates (adds a methyl group: CH3) to part of the ribosome, which is the target of erythromycin. This means that erythromycin can no longer bind to the target, as shown in Figure 2 below, meaning the bacteria can continue to thrive in the presence of the antibiotic. 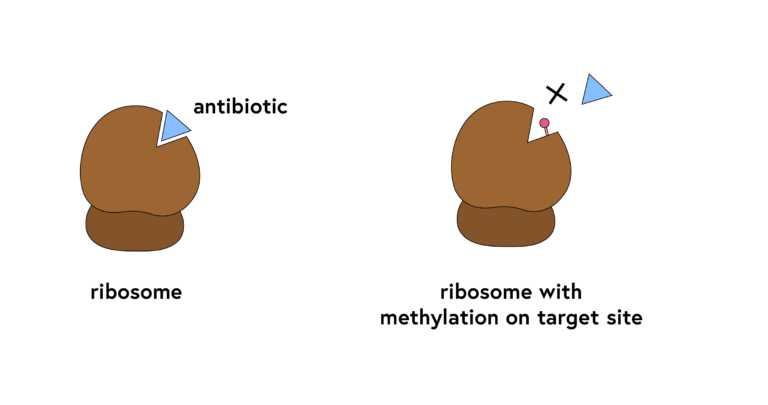 Figure 2. Schematic of a ribosome with an antibiotic fitting into a groove; the same ribosome methylated blocking the groove so the antibiotic can no longer fit 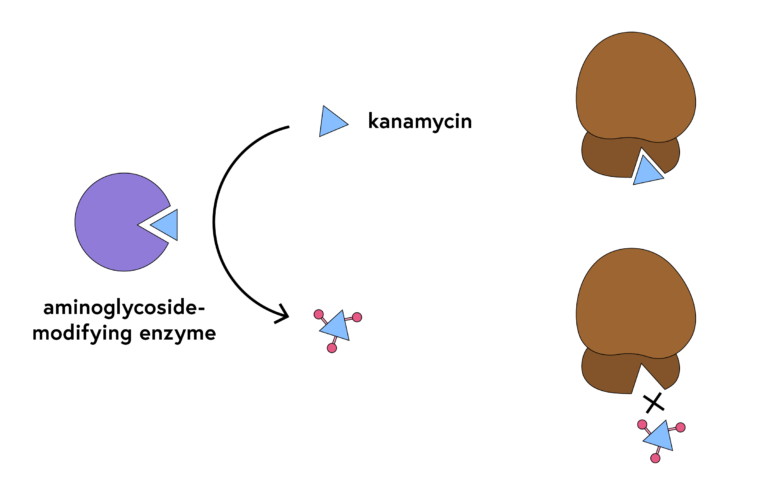 2. Modification of the antibiotic target site.

A common mechanism that bacteria use to become resistant to antibiotics is by modifying the target of the antibiotic. As bacteria grow and replicate they copy their genetic material (the genome). When they do this, occasionally mistakes in the DNA sequences get included (e.g. an A gets replaced with a C). These mistakes only happen very rarely, but the very large population sizes (billions and trillions) of bacteria, means that this happens frequently enough that occasionally these mutations are present in bacterial populations in the presence of antibiotics. If one of these mutations happens to be at a location of a gene that encodes for a protein that is the target of an antibiotic, then sometimes these mutations mean that the antibiotic can no longer bind to the target. This means that the bacteria with the mutation will have a growth advantage and will survive the antibiotic while the rest of the population will die.

This is a common mechanism for resistance to penicillin in Streptococcus pneumoniae, where the acquisition of mutations in the penicillin binding proteins (PBP) which are the target of penicillin. The presence of the mutations in the PBPs mean that penicillin can no longer bind and kill the bacteria. 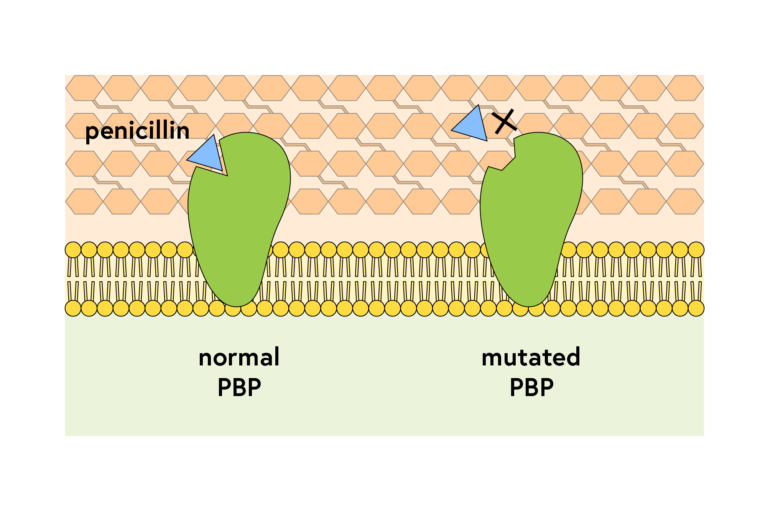 Figure 4. Normal and mutated PBP against a background of the bacterial cell membrane and cell wall; Penicillin fits into a groove on normal PBP but cannot bind to mutated PBP

Similarly resistance in many bacterial pathogens to fluoroquinolone antibiotics such as ciprofloxacin is mediated by mutations in the DNA gyrase and DNA topoisomerase IV genes, which are the target of ciprofloxacin.

3. Replacement of the target site. 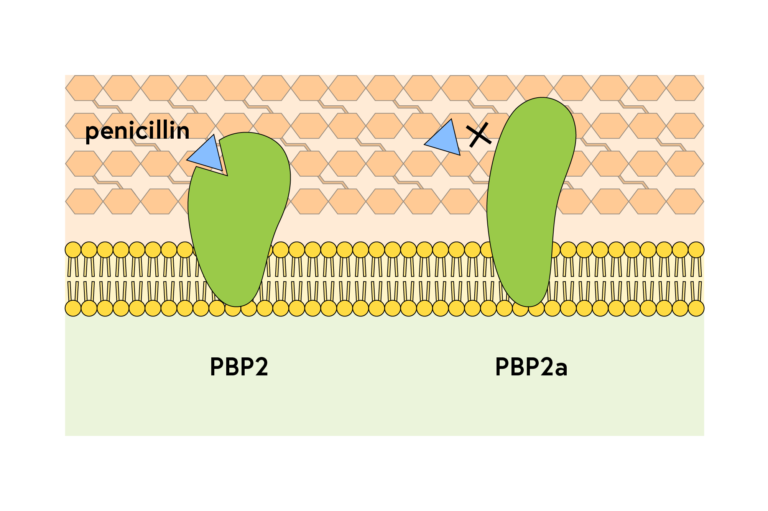 Figure 5. PBP and PBP2a against a background of the bacterial cell membrane and cell wall; Penicillin fits into a groove on normal PBP but PBP2a has an elongated shape with no groove

4. Overproduction of the target. 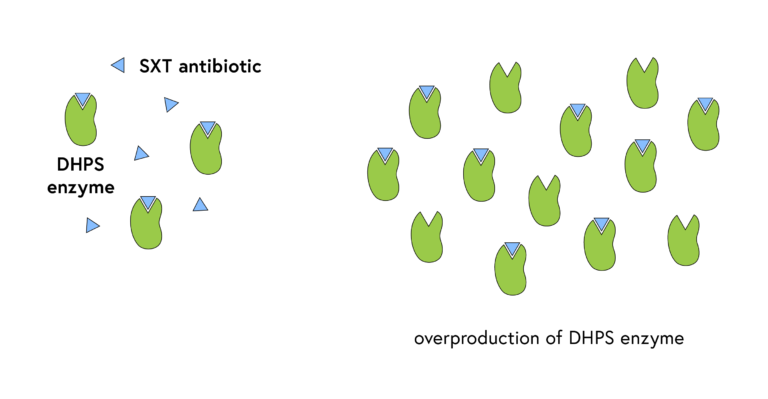 In the previous section, we discussed that some bacterial species are intrinsically resistant to some antibiotics via reduced permeability and efflux pumps. In addition, bacteria can acquire additional efflux pumps that specifically pump a single type of antibiotic, for example TetA efflux pumps that specifically pump tetracycline from the cell. Equally the permeability of the cell can be altered by the acquisition of mutations in porins (protein channels through cell membrane). These mutations can include porin loss, a modification of the size or conductance of the porin channel, or a lower expression level of a porin. Ultimately both mechanisms, efflux pumps and reduced permeability, lower the intracellular antibiotic concentration in the bacterial cell by either exporting the antibiotic or by not allowing its importation, respectively. 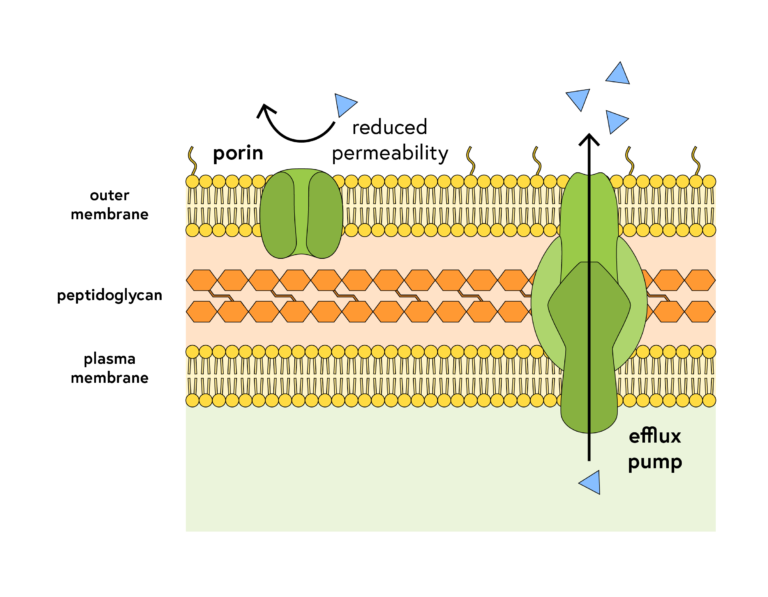 Figure 7. Outer membrane, peptidoglycan cell wall, and plasma membrane. A porin channel sits in the outer membrane, and an antibiotic cannot enter the cell from the channel labelled reduced permeability. A large multi-subunit efflux pump crosses all three layers and an arrow shows the antibiotic being removed from the cell