Find out more
Home / IT & Computer Science / Coding & Programming / Scratch to Python: Moving from Block- to Text-based Programming / How to generate a unique username using Python

How to generate a unique username using Python

In this article, you're going to make a username generator that will combine random words and numbers together to make unique usernames.

Translating Scratch code into Python code helps learners avoid having to think about the logic of their program, and instead has them focus on the syntax of Python, so it’s a great way of introducing them to the language.

In this exercise, you’re going to make a username generator that will combine random words and numbers together to make unique usernames.

You can look at my completed code for the username generator in Scratch, along with some of the data structures that are used.

Your task is to turn this into a Python program. Remember, you can look back at earlier steps in the course to remind you of the correct syntax or construct to use.

The first thing you will need to do is to create a couple of lists containing adjectives and nouns. Here is a list of a ten adjectives in Scratch: 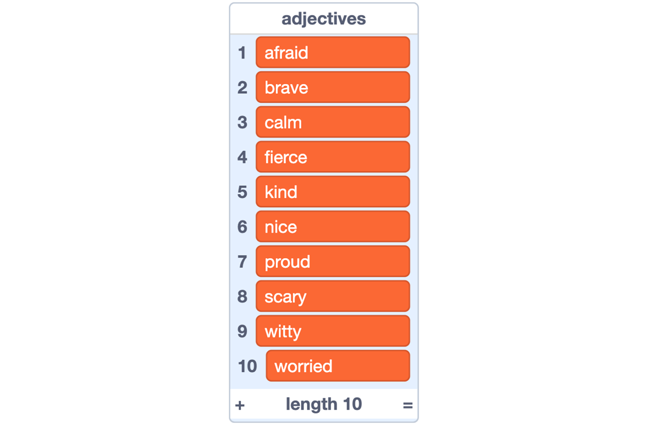 You are now going to create two variables with values chosen at random from each of the lists. In Scratch 3, there is no random block that allows you to randomly choose an item from a list. Instead, you have to use the combination of blocks below to do this:

In Python, this needs less complicated code, but you need to remember to import choice from the random module before you can use it.

The next step is to create a first_digit variable and a second_digit variable with values that are random numbers between 0 and 9. Here’s how this can be achieved in Scratch:

Here is how it can be achieved in Python code:

You have nearly finished your Python program. Now you need to concatenate some variables together. The Scratch blocks below join the first_word, second_word, first digit, and second digit variables together, and assign the resulting string to the username variable:

It is necessary to change the numbers that are picked randomly to strings. This is because Python can only join a string to another string, and not to a number. We’ll cover this in more detail later.

Do not worry if you get errors, this is to be expected. It is normally a syntax issue, for example, missing a ' or ,.

Read any error message that appears and see if you can work out which line the error is on. You may need to check through your code line by line.