I recommend that you use IDLE for this exercise rather than using Trinket.

Find IDLE in your application menu, and open it. The window that opens is called the shell, or the interpreter or sometimes repl. It doesn’t really matter what you call it, just be aware that on different websites and tutorial videos, it could be called any of these things. 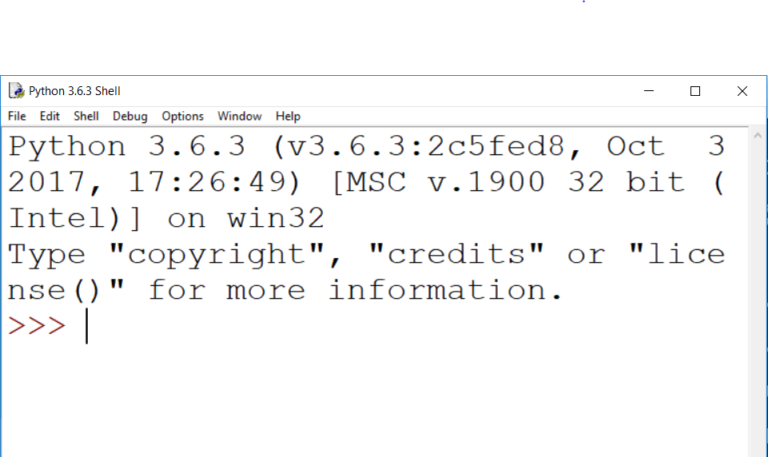 The shell is used to write code that runs straight away. This is useful if you just want to test out a line of code or find out the value of some variable. You can have a go at writing a few lines in the shell now. Try the following:

When writing programs, you don’t write your code in the shell. Instead you use a file. Click on File and then New File in the menu bar to create a new Python file.

You’ll want to save this file straight away, since in IDLE you always need to save before running any code. Click on File and then Save, and call your program username_generator.py.

Let’s see how you write and run code in IDLE. In your username_generator.py file, write the following two lines of code:

It doesn’t really matter what you use inside the print statement, so you can write any strings you like.

To run this code, you need to save the file again. Either click on File and then Save or alternatively hold down the Ctrl key and then press the s key on your keyboard.

To actually run the code, click on Run and then Run Module, or alternatively press the F5 key on your keyboard. (You might need to hold down the Fn key as well if your function keys are used for controlling volume and screen brightness.)

You should now see the results of the program as an output in the shell.

Translating Scratch code into Python code helps learners avoid having to think about the logic of their program, and instead has them focus on the syntax of Python, so it’s a great way of introducing the language.

In this exercise, you’re going to make a username generator, that will combine random words and numbers together to make up unique usernames.

Let’s have a look at one version of the completed code for the username generator in Scratch, along with some of the data structures that are used.

Have a play with the program here.

And here is an image showing the data structures used and the main script: 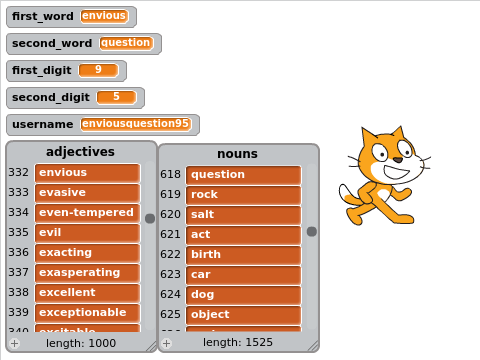 Your task is to turn this into a Python script.

There are a couple of small tweaks you will want to make.

You can see the full username generator project here. You can try out your new skills in a free Code Club – find out more at codeclubworld.org.