What types of hardware are used in physical computing projects? Explore some of the hardware used including sensors and motors. 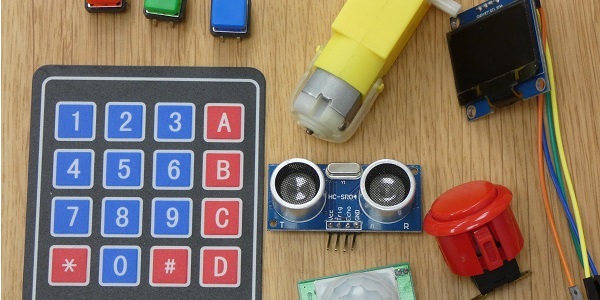 Physical computing is a combination of hardware, software, and some sort of microcontroller.

There can also be various types of materials involved which allow us to prototype new designs and new products that somehow interface with the real world. Physical computing is concerned with developing hardware devices that can sense and act in the real world.

Let’s explore some of the types of hardware devices found in physical computing.

In the physical world, there are all sorts of energies such as light, temperature, or movement that we might want to capture and translate into electrical energy, or data that we can actually store and use in a computer.

Transduction is when physical energy is transferred into electrical energy or vice versa. Transducers are used to perform transduction.

The input transducer or the sensor is a device that allows us to sense the world around us. It captures physical energy and converts it into digital data. Here are some examples of physical energy that we can sense:

We can also measure things about our body, for example a heart rate monitor. There are many other things we can sense around us.

At its essence, an input transducer or a sensor essentially converts physical energy in the world around us into digital information that can be stored in a computer.

To demonstrate how ubiquitous sensors are in modern technology, let’s have a quick look at this example of a car. Many modern cars are equipped with lots of different sensors. They collect information about the engine, the lights, your wheels, your fuel, the transmissions, the way you are accelerating, etc. All of this information is processed by a small computer to help you drive the car. It gives you a better driving experience.

Output transducers or actuators are devices that allow us to change the real world, to communicate information that was triggered by some sort of input in the real world.

We can do this through the following means:

An output transducer converts digital data from the computer. It changes it into physical data that manifests itself in the real world. Basically, the reverse of what the input transducer does.

How do we Achieve Transduction?

Now we know about transducers, how do we actually get the physical energy from the real world into the virtual world of our laptops/computers? The problem is that they’re very difficult to connect directly. Our computers are not designed to interface with these types of sensors. Microcontrollers are used to fix this problem.

A microcontroller is a bridging device that connects to the computer but also to the input and output transducers. It allows us to program how the inputs and outputs should be connected to each other.

You will learn more about microcontrollers in the next step.

What is not Hardware

There is often a debate about what is and isn’t hardware. Is a 3D printed case for air quality sensor hardware? Does hardware have to be electrical? We’ve separated out hardware (sensors and actuators) from the design of a device – the case it goes into, the stand it might sit on. These are covered more in a step later on in the course.

Have a look around your current surroundings. How many transducers can you spot? Are they input or output? What are they doing? Your mobile phone has a lot!