The key channels of climate finance

In this article, we'll go into the architecture around climate finance and explain the three key channels through which it flows.

There are various organisations that fund climate adaptation globally. A number of these organisations get their mandate from the United Nations Framework Convention on Climate Change (UNFCCC).

In order to get a complete overview of climate change funding we will explore the distribution of funds by the UNFCCC and affiliated organisations.

The UNFCCC established financial mechanisms to provide funding to developing country Parties. These mechanisms are in agreement with resolutions from both Kyoto Protocol and the Paris Agreement.

The UNFCCC has entrusted this to one or more existing international entities.

In 1994, the Global Environment Facility (GEF) was an entity established for this purpose. Later at the 2010 Conference Of Parties (COP) 16, the Green Climate Fund (GCF) was established.

The entities (GEF and GCF) are accountable to the COP, which decides on policy, programme priorities and eligibility for funding. We have already looked into other special funds such as the Special Climate Change Fund (SCCF) and the Least Developed Countries Fund (LDCF); both of which are managed by the GEF. 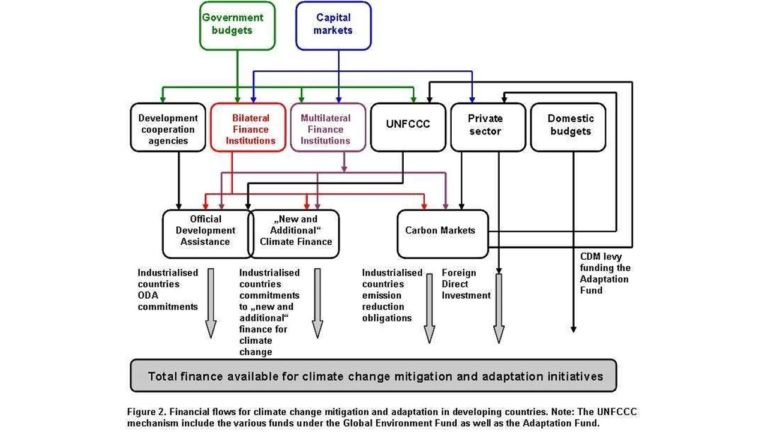 The image above shows climate finance flows to developing countries. The funds are distributed through various channels.

The three key channels through which climate finance flows are:

A significant share of public climate finance is spent bilaterally, administered largely through existing development agencies, although several countries have also set up special bilateral climate funds. Key governmental players are the US, EU, Germany and Norway. These countries partner directly with a developing country to finance climate change strategies.

Both kinds of arrangements contribute significantly to climate adaptation finance in developing countries.

3. Regional and National Funds (on the recipient side)

Many developing countries have set up their own regional and national funds to receive and administer climate funding.

Such a multitude of funding channels increases the options and therefore possibilities for recipient countries to access climate finance but also makes the funding process more complicated.

It becomes increasingly difficult to monitor, report, and verify climate finance, coordinate a response, as well as to account for its effective and equitable use.