Now that we understand Relationship Behaviours, let’s explore Hierarchical Relationships in this step.

You can gain valuable business insights by defining and querying hierarchically related data. The hierarchical modelling and visualisation capabilities give you a number of benefits:

Some standard entities in Common Data Model already have hierarchies defined. Other entities, including custom entities, can be enabled for a hierarchy and you can create the visualisations for them. 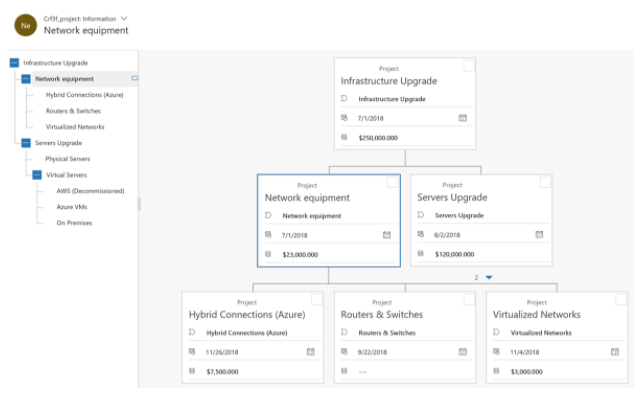 For example, Project within your organisation may have a number of sub-projects included, each with an independent set of data. By defining the self-referential relationship for the Project entity, you define a data structure where a project can have a parent project and sub-projects thus creating a hierarchy.

Once the hierarchical relationship is defined, and a record is part of the hierarchy, users will be able to select View Hierarchy option in the model-driven apps when the record is selected.

Hierarchy view uses Quick View forms that are part of the solution to visualise individual records. If more than one Quick View form is available, users will be able to switch using the form selector.

Hierarchy and visualisation are limited to one entity only, e.g. you cannot show accounts and contacts in the same visualisation.

Next up, we focus on Other Entity Options.