In the last activity, we discussed Manage Security Roles and Business Units. We will now learn about Configure Hierarchy Security.

The hierarchy security model extends other Common Data Service security by allowing managers to access the records of their subordinates or do work on their behalf. It can be used in conjunction with all other existing security models.

The Manager hierarchy security model is based on the management chain or direct reporting structure, where the manager’s and the subordinate’s relationship is established by using the Manager field on the user entity. With this security model, the managers are able to access the data that their subordinates have access to. They are able to perform work on behalf of their direct reports or access information that needs approval.

With the position hierarchy security, various job positions in the organisation can be defined and arranged in the hierarchy using the Position entity. You can then add users to any given position using the Position lookup field on the user record. Users at the higher positions in the hierarchy have access to the data of the users at the lower positions, in the direct ancestor path. Similar to manager hierarchy, the parent positions have full access to the child positions’ data but the positions higher than a direct parent have read-only access.

In both hierarchy models, a user higher in the hierarchy must have at least the user level Read privilege on an entity, to see the subordinates’ data. For example, if a manager doesn’t have the Read access to the Case entity, the manager won’t be able to see the cases that their subordinates have access to.

To set up the security hierarchy, you must have an Administrator security role.

The hierarchy security is disabled by default. To enable:

The Hierarchy Security window shown below: 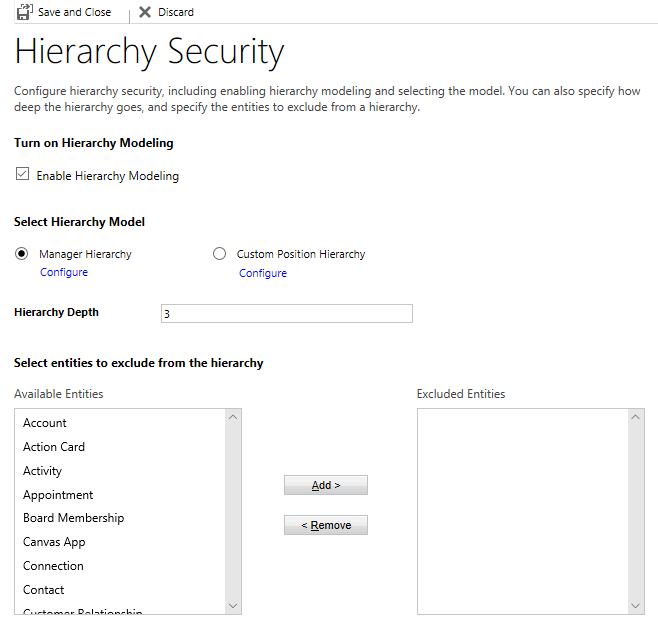 After you have enabled the hierarchy modelling, choose the specific model by selecting the Manager Hierarchy or Custom Position Hierarchy.

Set the Depth to a desired value to limit how many levels deep a manager has Read-only access to the data of their subordinates. For example, if the depth equals to 2, a manager can only access his records and the records of the subordinates two levels deep.

All system entities are enabled for hierarchy security out-of-the-box, but, you can exclude selective entities from the hierarchy.

Select Configure under Custom Position Hierarchy to configure Position records that can be then applied to individual users. For each position, you would need to specify the Name and optional Parent Position that defines the hierarchy.

Select Configure under Manager Hierarchy to open list of users in the environment. When you open an individual user record you can configure either or both Manager Hierarchy and Position Hierarchy for that user. These entries are configured in Organisation Information section on the user form:

The Hierarchy Model selected for the organisation earlier will define which field, Manager or Position needs to have their value set to apply for the hierarchy permissions.

To change either manager or position for multiple users, select one or more user records in the user list, select More (…) command, then select either Change Manager or Change Position to change the value for all selected records.

To improve the performance:

Next up, we’ll be summarizing Configure Hierarchy Security.