What are Branches, Tags and Repositories?

This step describes the difference between branches, tags and repositories. Interpreting the graph correctly allows you to quickly get a handle on potentially complicated projects.
© The University of Manchester

This step describes the difference between branches, tags and repositories. 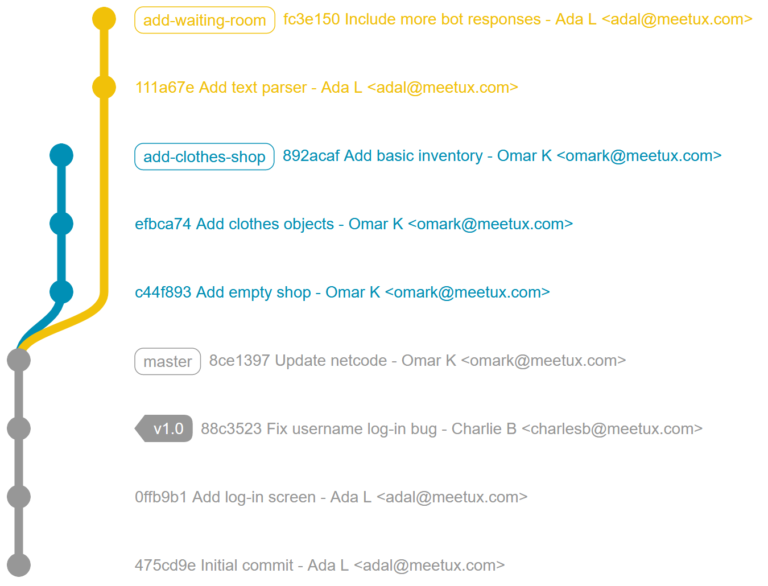 Interpreting the graph correctly allows you to quickly get a handle on potentially complicated projects. For instance, you can see that two different versions of the software “branched” out after the commit that included an update to the netcode. This means both versions include this update. Each branch has a unique name (which should, ideally, inform you of the branches purpose).

Here is a version of the graph in a horizontal arrangement.

Since changes made on a branch do not affect any other branches, the addition of an empty shop which was committed on the [add-clothes-shop] branch (the blue branch) will not be contained in the [add-waiting-room] branch (the yellow branch).

If you look at the “Include more bot responses” commit, you can see that it is based on the “Add text parser” commit, which is based on the “Update netcode” commit and so on, all the way back to the initial commit.

The graph also depicts a “tag”. A tag is a simple pointer to a commit. There is a tag on the commit where a username bug was fixed. The tag name is “v1.0”. Presumably, this commit represents the initial release version of the software. It is common to tag release versions this way. However, tags can be named anything and point to any commit so they are very flexible.

The entire codebase including all of the information required to show and play back the history of changes is held in a virtual storage area named the repository. If you are working on a project which is stored on your local machine it is referred to as a local repository.

Although it might be possible to send your local repository to a colleague who is also working on the project, there would be many disadvantages to doing so. Imagine how complicated things would quickly get with multiple repository versions being sent between team members, each with different changes contained within them.

This is exactly the type of problem which Git and version control is designed to overcome!

Some hosting services such as GitHub, GitLab and BitBucket have been developed to host repositories which are accessible over the internet. Services such as these can be used to easily provide a remote repository for a project, so they have become very popular and almost synonymous with Git. However, it is important to note that using services such as these is not strictly necessary. There are other ways to deploy a remote repository and often a single, local Git repository is a perfectly valid choice for a project, depending on its scope and development plan.