Background: What is antimicrobial resistance?

Article discussing what antimicrobials and antibiotics are, and external videos describing how antibiotics work, how AMR arises and spreads.
© BSAC & PHE

Antimicrobials are medicines that help your body fight infection by killing microbes including bacteria (antibiotic agents), viruses (antiviral agents) and fungi (antifungal agents). They are often made from compounds produced by other bacteria and fungi that destroy or limit the growth of specific microbes. 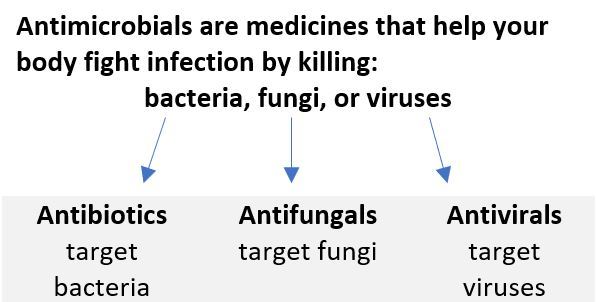 Antibiotics are antimicrobials that target bacteria only. They were not largely used until the 1940s when researchers were able to make them into medicines for large-scale use. For the first time, effective treatment for some of the most serious infections, like tuberculosis, syphilis and bacterial pneumonia, became available.

Examples of antibiotics include:

Painkillers such as paracetamol, ibuprofen, aspirin and codeine are not antibiotics.

The video below provides information on how antibiotics work. It can be used within a classroom discussion for older children (KS3-4).

After being in contact with antibiotics, some bacteria can become resistant to antibiotics and are no longer effectively killed by them. This causes a serious health risk because without good antibiotics:

Did you know? A report in 2016 indicated that about 700,000 people die every year globally because of antimicrobial resistance (about 5,000 in the UK). If no action is taken this could rise to 10 million per year by 2050 and lead to a cumulative global cost of 100 trillion US dollars!

Video: Consider watching this video on how antibiotic resistance spreads if you would like to teach detailed content to older children.

A PDF summary of the videos can be found in the downloads section below.

For similar videos, you can access the collection here. These videos are part of a collection designed to help older children (over 14 years) understand antibiotics and vaccinations, and can be used in class, as part of coursework and for revision.