The Physiological Basis for Weight Regulation

Watch this lecture video to learn about how body weight is regulated.

Regulation of Body Weight Is Complex

Whilst regulation, or homeostasis, of body weight is most simplistically considered as an equilibrium between “Energy In” and “Energy Out”, the energy out regulation is extremely complex. 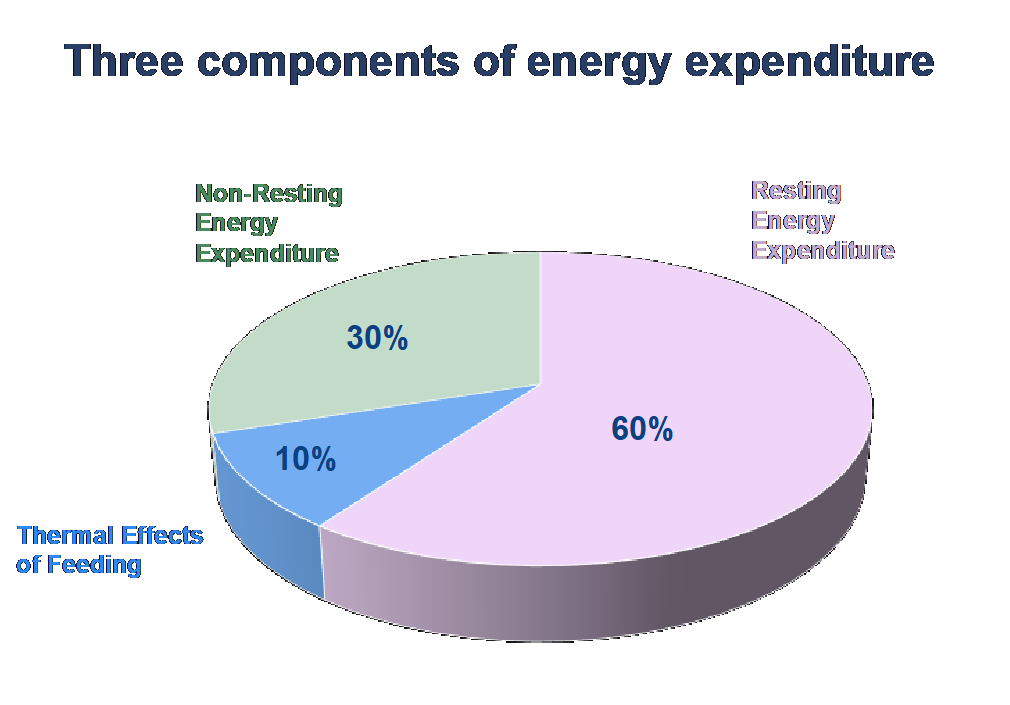 In adults with a stable weight, Resting Energy Expenditure is the greatest contributor to energy output, between 60 and 70%.5 This is the energy expended on resting processes such as cardio-pulmonary activity.

Non-resting energy expenditure only accounts for 20-30% of energy output, and this relates to the energy expended during physical activity or non-sedentary behaviour. Hence it is important that when we think about exercise prescription for patients as part of their weight loss management plans, we understand this is a lesser component of the homeostasis equation compared to resting energy expenditure.

Finally, the thermal effects of feeding make up the remaining ~10% of energy expenditure.6

For adults, despite wide variability in our day-to-day eating habits and physical activity, weight is maintained in a stable or narrow range for long periods of time. This is due to the central integration of peripheral signals about fat stores, energy intake, and longer-term energy stores.

The primary brain region involved in appetite homeostasis is the arcuate nucleus of the hypothalamus, which projects to other brain regions such as the paraventricular nucleus and the lateral hypothalamus. Two interconnected groups of neurons in the arcuate nucleus have opposite effects on energy balance with some hormones increasing appetite and stimulating food intake and others suppressing appetite and inhibiting the drive for food.

However, it is evident that our desire to eat extends beyond a motivation for energy intake balance. The limbic system, our conscious will, and reward circuits all influence these central pathways.

Peripheral control of hunger and appetite is driven by hormonal signals generated from adipose tissue (leptin), the pancreas (insulin), and the stomach (ghrelin). These hormones travel through the bloodstream and via the vagus nerve to the brainstem and onto the hypothalamus and other areas of the brain including the area postrema and nucleus of the solitary tract. There are reciprocal pathways between these regions. Short term regulation of food intake is driven mainly by hormonal signals from the gastrointestinal system as follows:

Long-term regulation of weight and appetite is driven by peripherally released hormones including LEPTIN (secreted by adipose tissue) and INSULIN (secreted by the pancreas). Under normal circumstances when an individual is in weight homeostasis, leptin is released proportionally to the volume of adipose tissue. Leptin travels to and acts on neurons in the brain to inhibit the neurons involved in the hunger stimulation pathways. Leptin is a key player in obesity, with experimental studies showing that pathological leptin deficiency or leptin resistance in the central nervous system results in severe obesity. Insulin is secreted by the pancreas and similarly acts to suppress appetite. 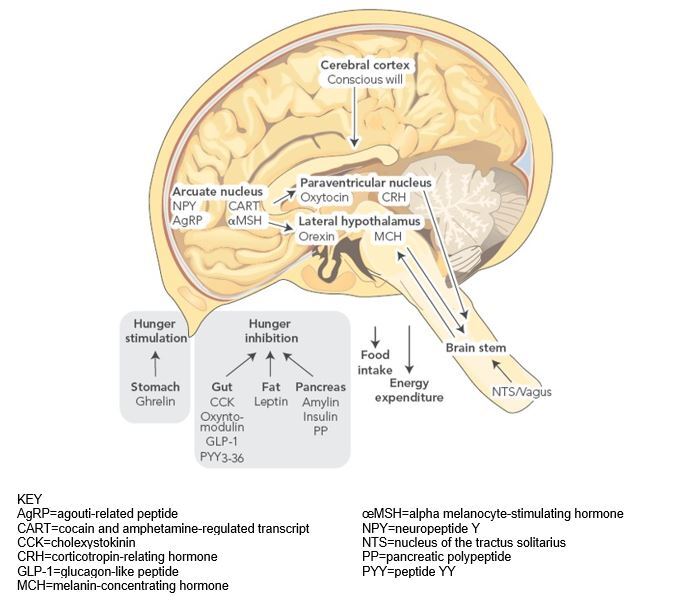 Use the points discussed in this video in your approach to weight management.