Obesity is associated with multiple rheumatological conditions including but not limited to osteoarthritis (OA), lower back pain and gout.

There are a number of risk factors for OA, some of which are non-modifiable such as age, sex and family history. One of the most important modifiable risk factors, particularly for knee OA, is having overweight or obesity 35, 36. In addition to increasing the risk of OA disease onset, overweight and obesity adversely affect outcomes for people with OA at every stage of the disease by aggravating pain and disability, accelerating OA progression37, increasing the likelihood of requiring joint replacement surgery38 and adversely impacting outcomes following joint surgery39. 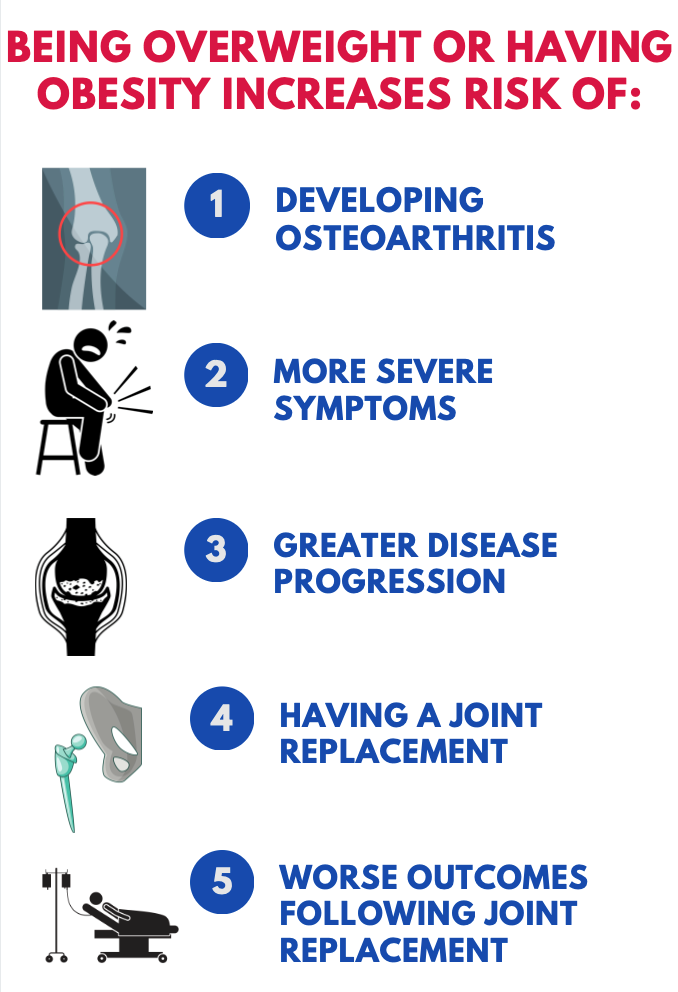 How Obesity Contributes to the Disease State

Altered biomechanics, impaired muscle function and reduced cyclic loading through lack of physical activity in people who have overweight or obesity are thought to contribute to OA structural joint damage. Evidence shows that obesity alters gait and joint biomechanics.

At self-selected speed, and compared with normal-weight individuals, those with obesity exhibit:43

The gait changes and altered biomechanics can negatively affect the load bearing regions of the articular cartilage contributing to disease.

Muscles also play a role in absorbing limb loading and providing dynamic joint stability. Muscle strength, particularly of the quadriceps muscle, is also a major determinant of physical function. Muscle weakness is common in people with OA and those with obesity can have lower strength relative to their body mass than those with a healthy weight. In addition, excess adipose tissue infiltration of muscle in individuals who have obesity can impair muscle function, which again may contribute to the severity of symptoms experienced.

Reduced physical activity levels – Cyclic physiologic loading of the limbs, as occurs with a physically active lifestyle and exercise can reduce inflammation systemically as well as locally in adipose tissue and cartilage. People with OA who have overweight or obesity often have lower levels of physical activity. Thus a reduction in regular daily joint loading may increase the susceptibility of joint tissues to inflammatory stress44.

Excess adipokines and leptin secreted in the obese state are thought to have catabolic effects on joint tissues including cartilage; there is a relationship between leptin levels and pain, radiographic severity of knee OA and knee cartilage loss. Excess adipokines are also produced locally in the infrapatellar fat pad which is closely associated to the knee joint. In addition, there is evidence that abnormal, altered or injurious mechanical stress of the joint can increase the expression of pro-inflammatory factors by joint cells and contribute to the catabolic processes that occur in joint tissues in OA45.

All international guidelines for the management of OA recommend weight loss for patients who have overweight or obesity as part of a conservative management plan. Evidence suggests that effective lifestyle interventions should include dietary change (typically a very low calorie diet using meal replacements to lose weight followed by healthy eating to maintain weight), behaviour change support and an exercise plan including strengthening exercise and aerobic activity.

Evidence shows that weight loss can lead to:

Mechanism by which obesity contributes to the disease state

Lower back pain is one of the leading causes of disability worldwide. Obesity is associated with lower back pain, with the link thought be partially biomechanical, with increased abdominal mass causing the pelvis and lower back to slant forward causing chronic back pain. Evidence also suggests that chronic systemic inflammation can contribute to back pain associated with obesity49.

Evidence shows that non-surgical weight loss attempts which resulted in reduced BMI were associated with clinically important improvements in function, and short-term improvements in pain50. Surgical weight loss in patients with chronic lower back pain has also been demonstrated to significantly improve the degree of functional disability of those with morbid obesity51 as well as being associated with a moderate improvement in pain52.