The International Commitment to Eliminate Trachoma

Discover the international commitment to trachoma elimination and the details of the intervention. 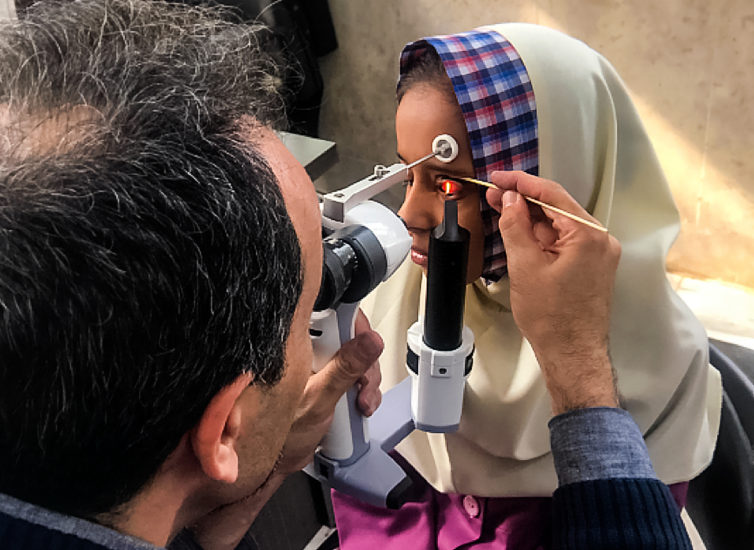 An international commitment allows WHO to give technical advice to member states on how those things should be implemented and to coordinate partners across the global stage.

Together with non‐governmental agency partners, researchers, and funders, WHO established the Alliance for the Global Elimination of Trachoma by 2020 (GET2020) in 1996. The goal for GET 2020 is the elimination of trachoma as a public health problem. Elimination was defined as the achievement of two measurable objectives, which reflect the elimination of the infectious and blinding sequelae of the disease:

WHO has a process for validating a country as having eliminated trachoma, using district-level data. Once a district has achieved the objectives outlined above, then mass drug administration (MDA) is stopped. A period of at least two years must elapse during which there is no mass provision of antibiotics followed by a population‐based survey to ensure that trachoma has not re‐emerged.

Finally, a dossier is prepared that demonstrates, largely through population-based surveys, that there is no evidence of re‐emergence of active trachoma, or unmet need for trichiasis surgery, in any formerly endemic district. An outside review group evaluates the evidence for elimination and recommends either validation of elimination by WHO, or further information/work.

With this in mind, the strategy to eliminate trachoma as a public health problem has specific targets to attain. The plan is built on a framework of:

Global debates about public health interventions to deal with infectious diseases use several key terms: control, elimination and eradication. The agreed definitions are:

Which type of target is chosen depends on the effectiveness of available interventions, the availability of resources and the strength of overall commitment from society and government.

To eliminate trachoma as a public health problem, interventions have to contain both biological (disease) and operational (process) dimensions.

The WHO draft road map for neglected tropical diseases 2021-2030 describes the integrated approaches needed to achieve these targets through crosscutting activities that intersect multiple diseases. The aim of the new road map is to facilitate alignment among member states and other stakeholders and to accelerate progress towards the prevention, control, elimination and eradication of the 20 NTDs and disease groups now prioritized by WHO and attaining the Sustainable Development Goals. Trachoma is one of the neglected tropical diseases considered in this roadmap.

The roadmap is built on three pillars that will support global efforts to control, eliminate and eradicate neglected tropical diseases:

The roadmap for trachoma elimination is summarised in the table below: 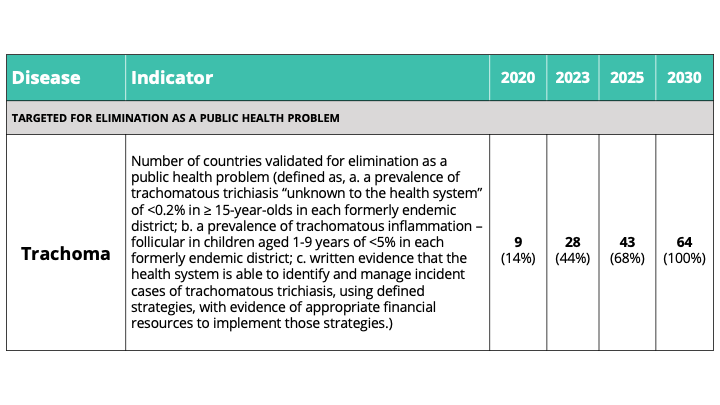 By 2020, nine countries were validated as having eliminated trachoma.

In your own setting, who are the key stakeholders involved, or who must be engaged at a district and national level, to eliminate trachoma?