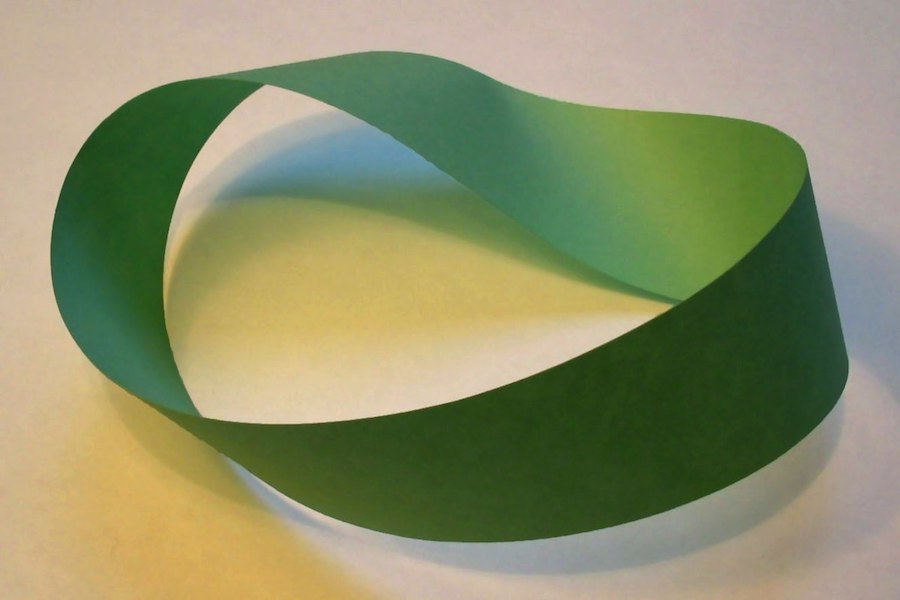 You have watched and played with Möbius strips. Let’s summarise what we’ve learnt.

Odd and even half-twisted paper strips

A strip of paper has two sides. Attaching its ends together produces a band. The band also has two sides, an inside and an outside. Cutting along the strip’s center line creates two new bands, each half the width of the original.

When you cut an n-band through its center line, the following happens according to the parity of n, n meaning the number of half-twists in the band:

Some more mathematical and topological properties

Mathematicians found that the outcome of bisecting a half-twisted band along its center line can be guessed even before cutting, just by observing the edge of the band. For example, if you follow along the edge of the Mōbius strip with your finger, you’ll find that your finger traces a closed band, half-twisted 4 times, which is what you get when cut the Mōbius band. Similarly, the boundary of the 2-band is what’s known as the Hopf link; the 3-band is the trefoil knot; the 4-band is Solomon’s knot; and so on, in one-to-one correspondence with the topology of the same bands cut through their centers.

Other cool stuff can be found by cutting the Mōbius strip one-third of the way from its edge, or making a Mōbius strip from two paper strips one on top of the other, or by glueing two (or more) Mōbius strips together as you have seen in the video and the quiz. If your interested in them, you can find many sites with more information, such as this. I also highly recommend Cliff Pickover’s book: The Mōbius Strip