Trust in the food system

Find out in this article who are the key groups of people involved in the production, selling and regulation of the food you eat.
© EIT Food

As you’ve have seen, the food system involves several activities and processes. However, consumers place trust in people or organisations [1]; so who are the key groups of people involved in the production, selling and regulation of food?

Who are the main people involved in the food system?

There are a lot of people who work in the European food system. There are over 500 million consumers and the number of people working in the six main food sectors to provide them with their food is shown in the figure below: 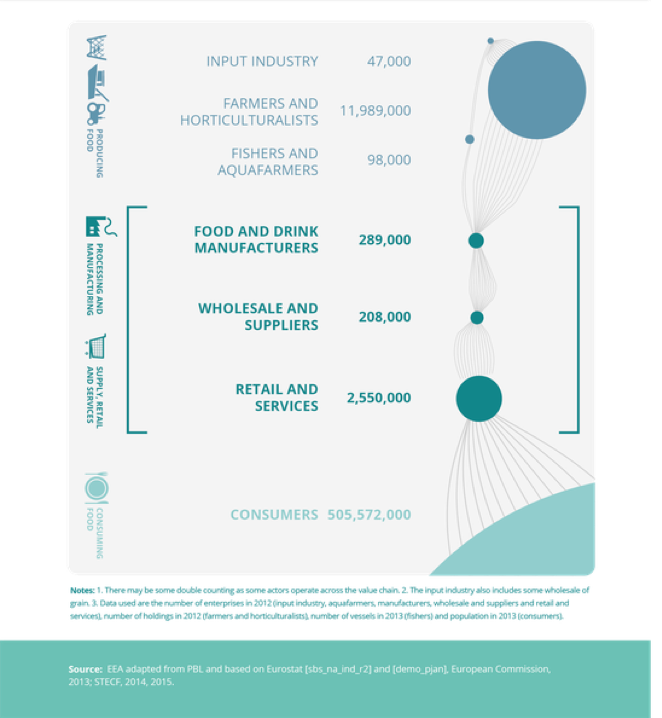 These different groups do the following:

Regulators in the food system

The food system in the EU is regulated/legislated by the EU Food law (Regulation 178/2002).

These laws are important to ensure safe handling of our food from farm to fork across EU Member States [6]. Foods imported from outside the EU also have to comply with the EU food law [10]. The EU has systems that can trace food through the system and can take action if any risks to the public are detected. The General Food Law also establishes the principle of risk analysis which involves three parts:

The European Food Safety Authority (EFSA) is a European agency funded by the EU [11]. It’s responsible for conducting the risk assessments and providing independent scientific advice on risks to the public linked to food.

There are also national laws and regulations that are in place within each country. Consumers are further protected by activities and checks made by independent institutions (such as the Food Standards Agency in the UK) [10] as well as other assessors, such as assurance or certification scheme inspectors. All of this independent regulation, monitoring and assessment is necessary to ensure that consumers can have trust in the food system.

The full list of references can be found under ‘Downloads’ and further reading is provided under ‘See also’ – both found at the bottom of this Step.