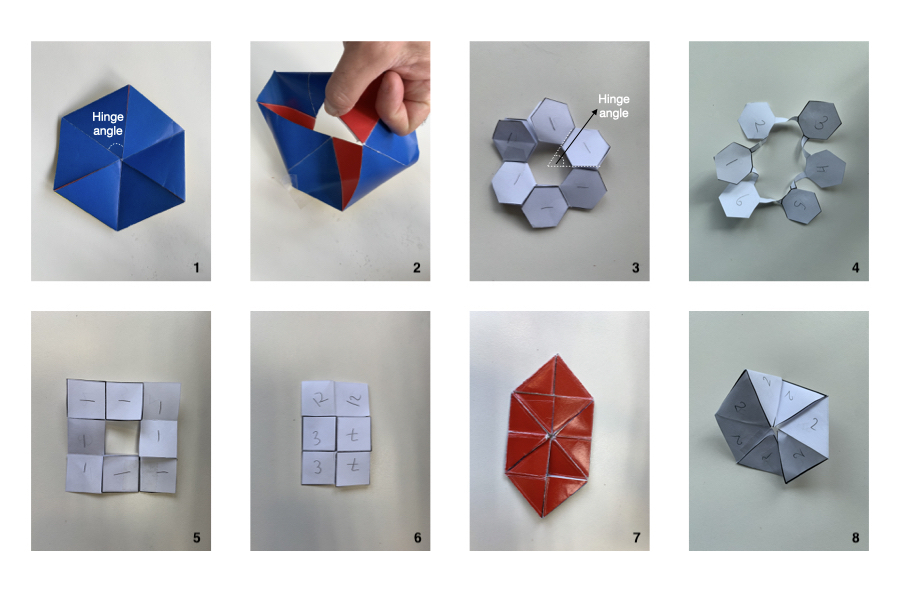 Les Pook has written two classic books on flexagon theory. His second book, Serious Fun with Flexagons, is a rigorous, comprehensive analysis of many kinds of flexagons, the nets from which they are constructed and some of their interesting properties. In this and the following articles we’ll learn a bit about Pook’s work.

Les Pook’s approach is extremely systematic, focusing on the structure of all possible flexagons. Very broadly speaking, his definition of a flexagon (in its main state) is a polygon ring where each polygon is a stack of hinged leaves and the polygons are hinged either along their edges or at their vertices. The angle between two edges is known as the hinge angle. Vertex – or as they are usually called – point flexagons are discussed in the next step. The use of the word ring may be a bit misleading, since when you fold up a tri-hexa-flexagon for example, it doesn’t have a “hole” in the middle, but mathematically it is still a ring, and in any case, if you “unruffled” it you will get a twisted ring of leaves – as you can see in the top two left hand photos in the image above (1 and 2). Some of Pook’s flexagons really are rings even in their main state, like the flexagon whose main state is a ring of hexagons in the image above (3). For fans of nomenclature, this is the octadecagonal ring hexagon hexa-hexa-flexagon! It’s worthwhile noting that Pook’s flexagon definition as polygon rings allows for skew flexagons – flexagons that don’t lie flat. There are different kinds of polygon rings depending on the number and shape of the polygons that make them:

Les Pook builds flexagons from templates, constructed from a minimum number of what’s known as sectors. A flexagon in its main state can usually be divided into identical units. These units are called sectors. The tri-hexa-flexagon, for example, is made out of 3 identical sectors joined at a common edge. Each sector has two pats, one of them with 1 equilateral triangle leaf, and the other with 2 equilateral triangle leaves. The difference in the number of leaves in each pat is the reason why there are 3 sectors and not 6. The sectors must be completely identical. The hexa-hexa-flexagon also has 3 sectors. In the next step we’ll learn how to make different families of flexagons from Pook’s sector templates – or as he calls them – fundamental nets.