A visualisation of a 4th century Roman banquet at Arbeia Roman Fort, South Shields.
© Newcastle University
Every year, our MA students take part in an immersive, dramatic seminar that stimulates further thought about both the physical details and personal circumstances of living in a Roman frontier. This year, YOU join them! This activity visualises a scenario that might have followed the so-called ‘Barbarian Conspiracy’ of AD 367.The videos which follow are an adaptation, designed for this course, of one of the immersive seminars run with Roman archaeology graduate students at Newcastle University.To prepare, let us first review the historical evidence.In AD 367 Britain was subjected to attacks on multiple fronts. Ammianus Marcellinus, the former army officer who wrote about these events just over 20 years later, described the concurrent attacks as barbarica conspiratio. Modern scholars, following him, tend to term this period of raiding and disorder ‘The Barbarian Conspiracy’. The following passages have been edited and adapted for ease of reading, but can be found more completely in Ammianus Marcellinus Book 27, chapters 8 (sections 1-10) and Book 28, chapters 3 (sections 1-9):

The Emperor Valentinian was alarmed by serious news that Britain was brought into a state of extreme need by a conspiracy of the savages while travelling from Amiens to Treves (Trier) in 367. Count Nectaridus, general of the coastal region, had been killed; another general, Duke Fullofaudes, had been ambushed by the enemy and taken prisoner.

The report alarmed the emperor, and he sent Severus, commander of the imperial household troops, to set things right. But Severus was recalled. Another commander, Jovinus, was dispatched and he reported that a strong army was required to remedy the situation.Finally, Count Theodosius, a man with a notable war-record, was chosen to lead an expedition to Britain. He commanded four units, the Batavi, the Heruli, the Jovii, and the Victores.

View Course
The ‘conspiracy’ consisted of many barbarians tribes. The Picts, as well as the Attacotti and the Scots, were ranging widely and causing great devastation in Britain. In the Gallic regions, the Franks and their neighbours the Saxons harassed with cruel robbery, fire, and murder.Theodosius crossed the strait (the English Channel) and landed at Rutupiae (Richborough), and began his march to Londinium (London). Once there, Theodosius divided his army into smaller groups and attacked the bands of the enemy, which were ranging about the country. The soldiers quickly routed those barbarians driving along prisoners and cattle, and Theodosius recovered the booty lost by the Britons.While in Londinium, Theodosius carefully considered his next steps. He had learned from prisoners’ confessions and deserters’ reports that the enemy was widely scattered and could only be overcome with good intelligence and unforeseen attacks.Finally, Theodosius issued proclamations, promising to pardon any deserters that returned to service, as well as other soldiers that were on furlough. As a consequence, most civil servants and soldiers returned to duty, and Theodosius asked that Civilis and Dulcitius be sent to him in Britain. Civilis, a man of somewhat fiery temper but steadfast in justice and uprightness, was to govern Britain as deputy-prefect. Dulcitius was a general distinguished for his knowledge of the art of war.Theodosius emerged from Londinium, and rendered the greatest aid to the troubled and confused Britons. After having routed and put to flight various insolent tribes which attacked the Romans, Theodosius completely restored the cities and strongholds that had suffered misfortunes. 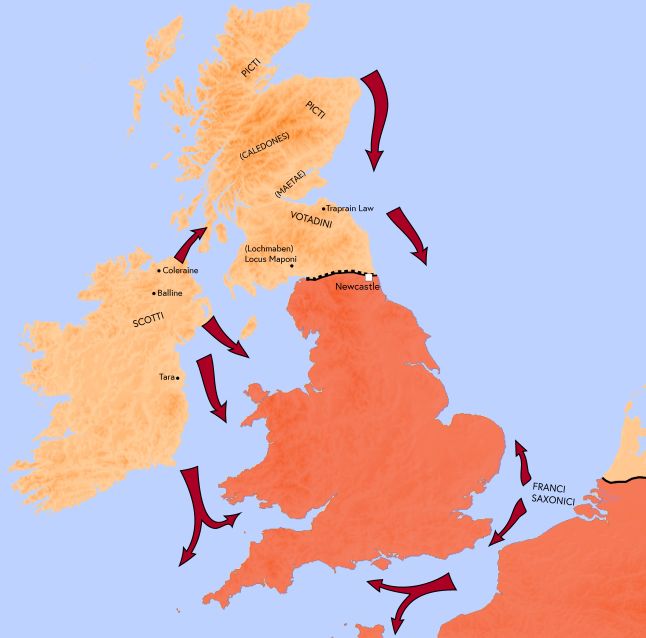 Map showing movement at the time of the barbarian conspiracy © Newcastle University, created using OGL data from Ordnance Survey.‘The Barbarian Conspiracy’ is only known from Ammianus’ account, and this leaves us with more questions than answers. Ammianus wrote his history during the reign of Emperor Theodosius, and his account describes the actions of the emperor’s father, Count Theodosius.After you have seen the videos we would like you to share your views on the events of AD 367 and their likely consequences for those who witnessed them. We will ask you to imagine you are Count Theodosius, sending your report to the Emperor and his court, stating who might be to blame.
© Newcastle University

Hi there! We hope you're enjoying our article: The Barbarian Conspiracy
This article is part of our course: Hadrian's Wall: Life on the Roman Frontier