In this article, we're going to focus on the practical implementation of micro-credentials in your institutional or organisational context.
© DCU

We will explore some frameworks which might be useful to consider when establishing a strategic and considered approach to micro-credential implementation. To start let’s take a look at the current credential landscape.

The diagram below, reproduced in a MICROBOL report published by the European Universities Association (EUA), provides a useful categorisation of the existing range of educational credentials available in most countries.

One thing to note from this categorisation is that each block is clearly delineated between the different types of credentials.

This taxonomy, found in Brown et. al (2020), envisions a two-axis, four-quadrant conceptualisation, reflecting whether a credential is either credit-bearing or non-credit bearing, and bundled or unbundled. 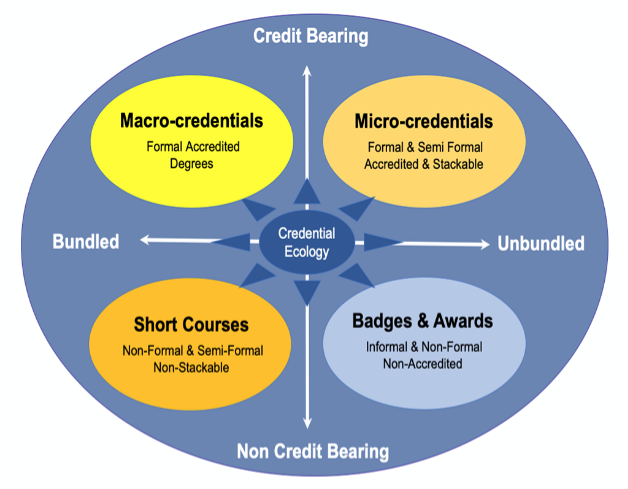 The distinction between bundled and unbundled is whether a credential can be considered a singular learning unit, or whether it is a subunit of a wider credential, as we have explored.

The distinction between credit-bearing and non-credit bearing is hopefully quite clear!

To further illustrate each quadrant:

Importantly, as we have argued, micro-credentials need not be a replacement to the traditional university degree – rather they might fulfil a particular purpose, for particular people, at particular points in their lifelong learning journey.

The taxonomy does, however, recognise intersections across the quadrants. As we discussed earlier, a short learning experience, such as an industry workshop or major conference, might lead to a certificate of attendance that may be incorporated into a professional portfolio.

We need to be careful that our thinking about the evolving credential landscape also charts employers in the ecosystem (Oliver, 2019). A key driver of micro-credentials comes from outside higher education itself, in a changing world of skills, employment, and professional progression.

In his 2021 forecast of technology and strategic trends, Ben Evans, a noted technology analyst, suggests that “brands go digital or brands go direct” will be an increasing trend across sectors. Corporate actors and organisations are increasingly entering the traditional credential space by creating their own types of certification (e.g. Google’s Career Certificates) and indeed establishing their own institutes of learning (e.g. Dyson).

It’s important to avoid “HE-centric” thinking, which excludes other sources of possible certification.

Indeed, direct provision of higher order learning by corporations and organisations with the requisite learning and developing functions could be considered as “disintermediation” of higher education (i.e., the removal of intermediaries) within a specific process.

Disintermediation has led to the disruption and unbundling of a number of sectors, such as music, television, computing and finance to name a few. As we have previously outlined, whether micro-credentials developed by industry will fuel this further is yet to be seen.

Micro-credentials, where there is a relationship between higher education institutions and organisations, are often considered a gold standard of “industry-informed learning”, with many believing that micro-credentials which draw on industry and higher education as being the most attractive and indeed relevant to learners, particularly in the development of work-based skills or knowledge.

Terms such as “co-construction’’ and “co-delivery” are becoming more widespread. However, the depth of this relationship between industry and higher education can be opaque and unclear, whilst in others, the role of both can be unpacked and explained clearly to the learner.

There is also a growing business model of tech and education companies partnering with higher education institutions to accelerate their development and delivery of online and digital offerings.

Moreover, these companies are acting as a “broker or intermediary” between these institutions and industries with a range of service and relationship offerings beyond traditional OPM models, an example of which is FourthRev.