Drawing on their own research, HolonIQ (2021) claims that micro-credentials are set to play a critical role in the reshaping of the higher education landscape.

They propose four scenarios to explore a range of possible futures. As illustrated in the diagram below, the scenarios fall into four quadrants based on the two axes of ‘market’ versus ‘government’ led initiatives, and the extent to which learning is aggregated or available in unbundled forms. 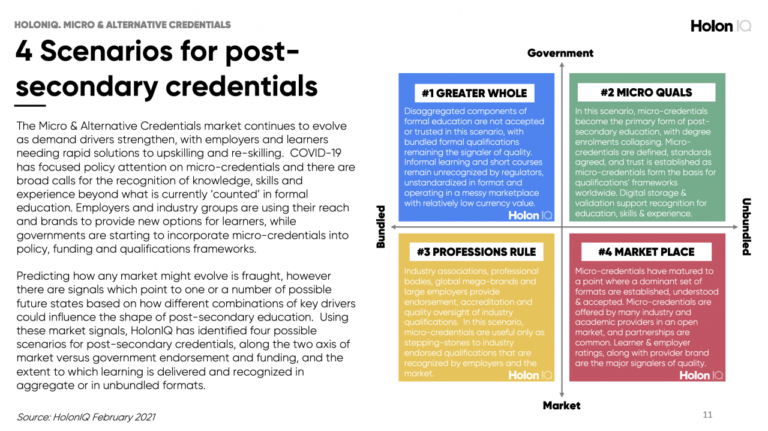 You can learn more about these scenarios and the predicted global growth of the micro-credentialing movement in this informative webinar recording hosted by HolonIQ in February 2021.

Anthony Camilleri, Director at Knowledge Innovation Centre, has also proposed a number of possible scenarios for how micro-credentials may change or reshape the higher education landscape, which we have posted as a video above. The six scenarios are:

PDF version of the image available below the step.

Anthony explains each scenario in this presentation, taken as part of a major launch event in January 2021 for the ECIU University’s second white paper on the future of the micro-credential movement (Brown, et. al., 2021). The entire webinar is also an optional viewing for those who are interested, available here, containing several important contributions regarding questions shaping the future uses of micro-credentials.

The scenarios help to raise a number of macro questions that are woven throughout our discussion.

Some of the activities we have utilised to guide this exploration have included:

We have enjoyed exploring these activities with you and hope that they have triggered you to ask a number of bigger questions. In many respects, there are still more questions than answers but if you still have gaps in your basic understanding, then you might like to glance through this useful resource which provides answers to 12 fundamental questions about micro-credentials.

We have asked and attempted to respond to many different questions about the possibilities of micro-credentials. We trust this topic has proved informative. We ask you to consider the following additional questions:

With special thanks to Anthony Camilleri, for the provision of this video.