Skip main navigation
Home / History / The History of the Book in the Early Modern Period: 1450 to 1800 / Children’s books

In this article, we look at children's books in the early modern period.
© Trinity College Dublin

Children’s books are some of the most beautifully illustrated and captivating of all books. Printers had been selling books for children since the beginning of printing: William Caxton sold several books aimed at young readers, including his own translation of Aesop’s Fables and Lydgate’s Stans Puer ad Mensam, a book of table manners for children. However, in the late 18th century there was a large increase in the numbers of printed books written for, and read by, children.

Many of these books were not designed for children at all but were modified versions of popular books such as John Bunyan’s The Pilgrim’s Progress, an epic Christian tale of a pilgrim’s journey to heaven. Some printers added illustrations to brighten up the texts and make the books more attractive to children. Others abridged chapters to make the books shorter and easier to read. In some cases, whole sections of books were cut out altogether. For example, in many editions of Gulliver’s Travels, Gulliver only travels as far as Lilliput – his adventures in Laputa and Brobdingnag and with the Hounniym are completely removed.

John Newbery’s Little Pretty Pocket Book (1744) is credited as the first ‘modern’ children’s book. It is a book of verse, attractively illustrated with woodcuts and clear, legible type. What makes this book special is how it addresses child readers. The preface (there are actually two prefaces – one addressed to “Master Tommy” and one addressed to “Miss Polly”) was written as though they are letters from the fable-character Jack Giant-Killer. This created a playful relationship between the book and the young reader, by presenting imagined characters as real and flattering the child reader by making them the centre of Jack’s attention.

However, this book wasn’t just for entertainment. It was sold with a choice of either a ball or a pincushion, each with one red side and one black side. When the child behaved nicely, a pin was stuck into the red side of the pincushion, when the child behaved badly, a pin was added to the black side. This was a way to monitor a child’s behaviour and encourage good habits. So, Newbery’s Little Pretty Pocket Book has a double function; it is both entertaining and instructional. 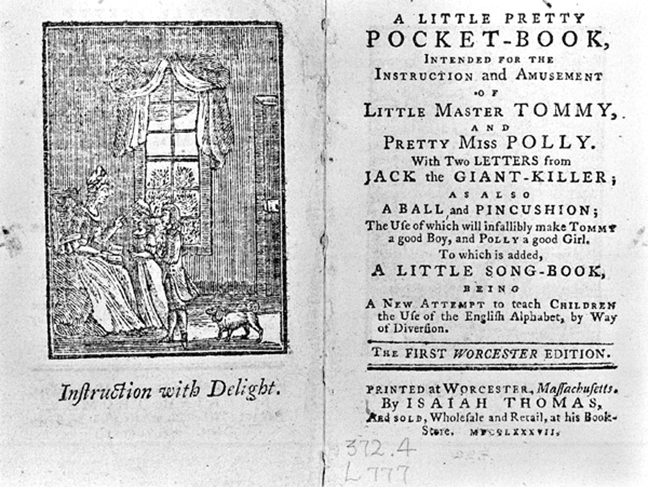 Many of the other books published in the 18th century similarly offer both education and amusement. For example, The History of Little Goody Two-Shoes (1765), published anonymously but now thought to be by the Irish author Oliver Goldsmith (1728?–1774), is both humorous and staunchly moral. 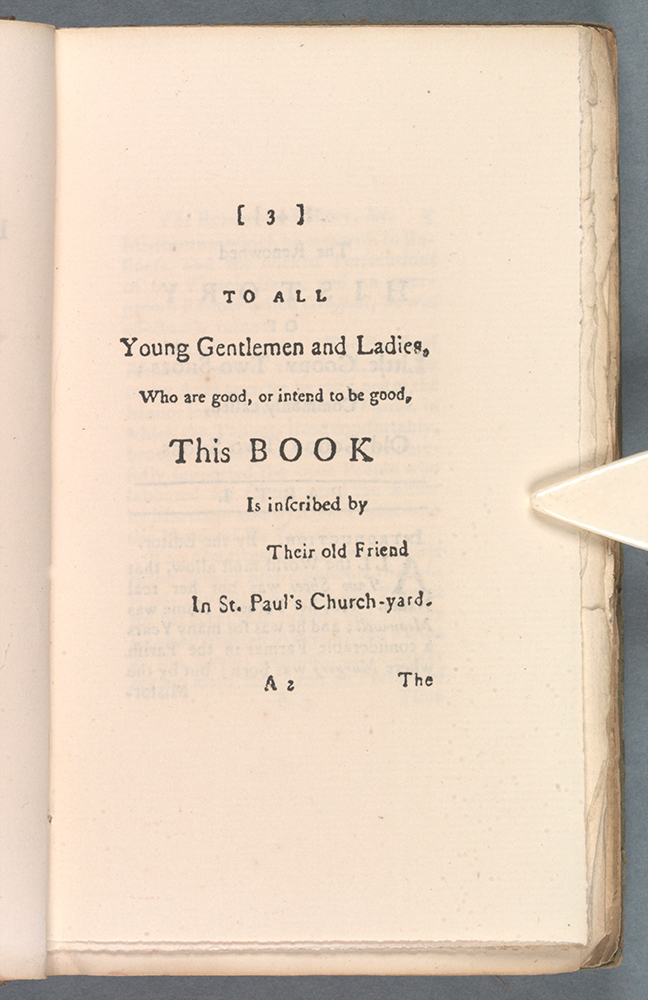 Fig 2. Anon. Goody Two-Shoes : a facsimile reproduction of the edition of 1766 (London, 1881), dedication page. © The Board of Trinity College Dublin.

Heavily moral books like Janeway’s A token for children: being an exact account of the conversion, holy and exemplary lives, and joyful deaths, of several young children (1709) remained hugely popular all through the 18th century and were reprinted many times over. 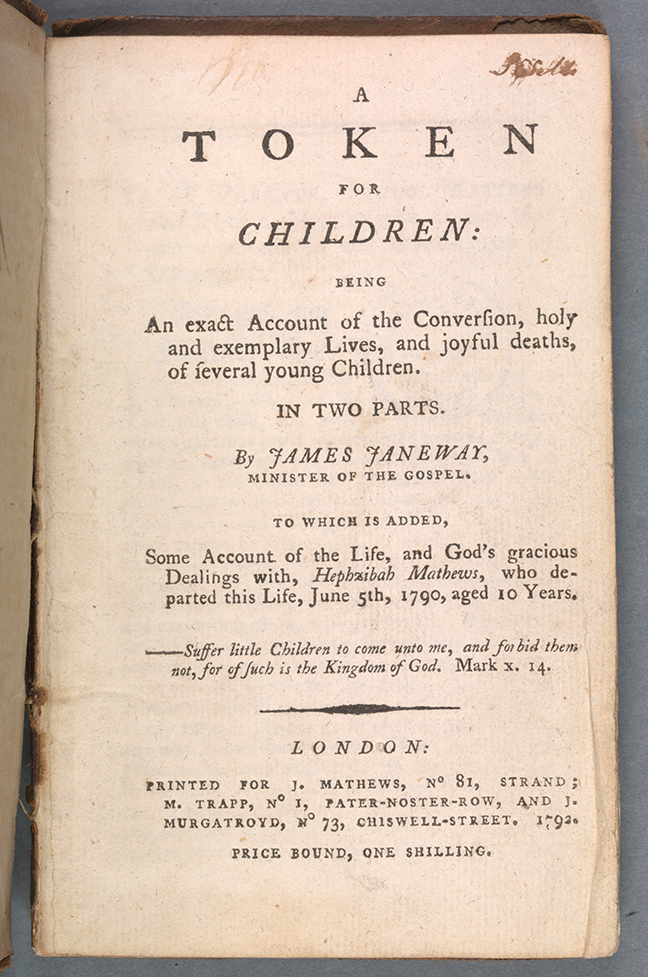 Fig 3. James Janeway, A token for children: being an exact account of the conversion, holy and exemplary lives, and joyful deaths, of several young children. In two parts (London, 1792) title page. © The Board of Trinity College Dublin.

This period also saw many popular genres of children’s literature developing: we see the first school story, Sarah Fielding’s The Governess (1749), and the first animal stories told from the perspective of an animal, including The Adventures of Pompey the Little (1750) (a dog) and Dorothy Kilner’s Life and Perambulation of a Mouse (1783). 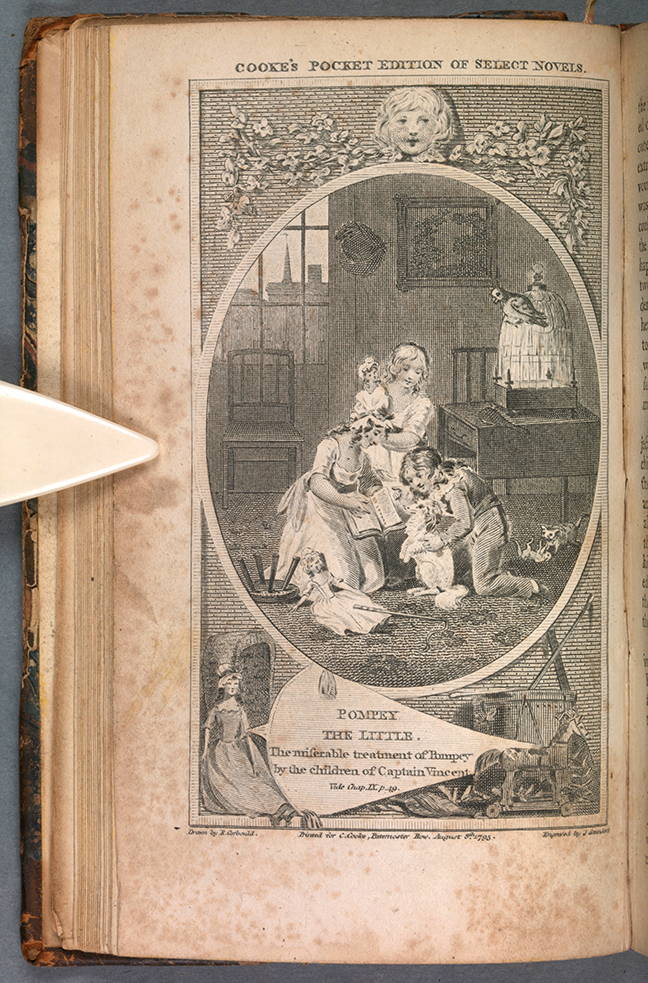 Fig 4. Francis Coventry, The history of Pompey the little; or, The life and adventures of a lap-dog (London, 1795?), plate facing p. 49. © The Board of Trinity College Dublin..

We also see the rise of “character” stories where a recognisable character has adventures over a series of linked stories, like Maria Edgeworth’s character Rosamond who first appears in a collection of stories called The Parent’s Assistant in 1796. The Rosamond stories were bestsellers, running to many editions published in both London and Dublin. 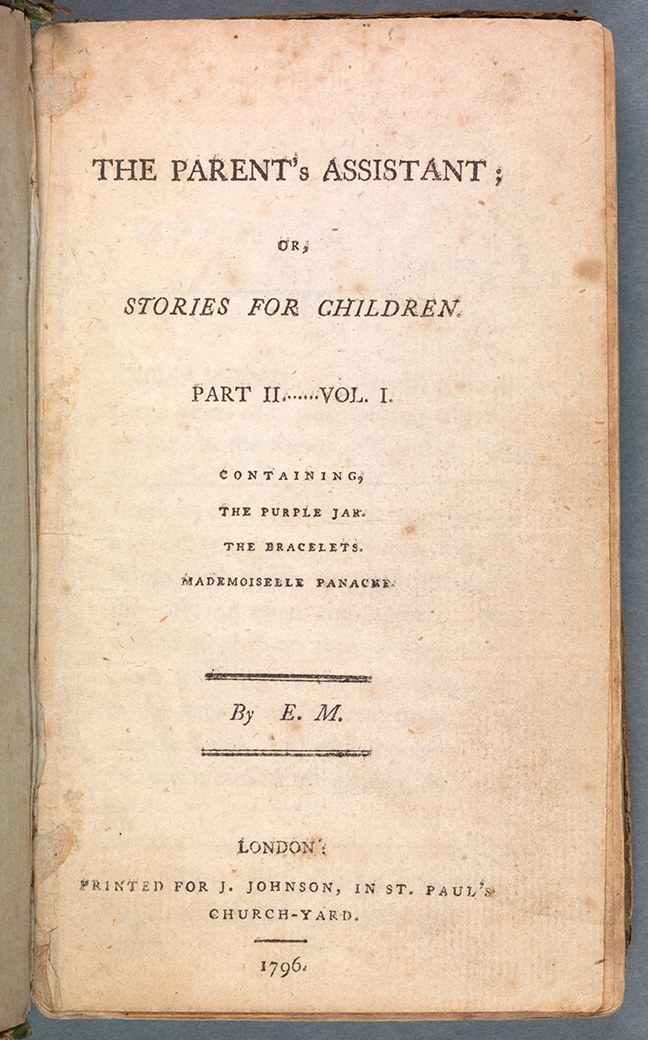 In fact, there were so many children’s books being printed by the end of the 18th century that a couple of years later, Sarah Trimmer (1741–1810), was moved to start a journal, The Guardian of Education (1802-1806), to review and recommend children’s books to parents, anxious that their child would get the very best books available.