The global landscape of religion and belief

The latest data from the Pew Research Centre appear to show that the world’s population is becoming more religious. Although the number of people describing themselves as non-religious is predicted to rise, the proportion of the whole is expected to decline. However, these headline figures mask a more interesting story. People are not necessarily choosing to become religious. Religiosity is rising largely due to high population growth in parts of the world with more limited access to a broad and balanced education and where freedom of religion or belief is often restricted. Where people have a choice, they are turning away from religion.

‘[There is] now no nation in the Western world, including former Eastern Europe and Central and South America, in which measures of religiosity per capita are not in decline.’
Callum Brown, Becoming Atheist

There may therefore be many more non-religious people than the data suggests as not everyone feels safe to reveal their non-religious identity, and with improved access to education, communication, and economic development, we may see a different story take place. The Human Development Index ranks countries according to a number of indicators of societal health such as life expectancy, adult literacy rate, per capita income, and educational attainment. There is a close correlation between how high up a country appears on the index and the size of a country’s non-religious population.

Humanism around the world

The map below shows the Humanists International member organisations.

Below, Giovanni Gaetani, Growth and Development Officer for Humanists International, provides an overview of humanist organisations around the world. 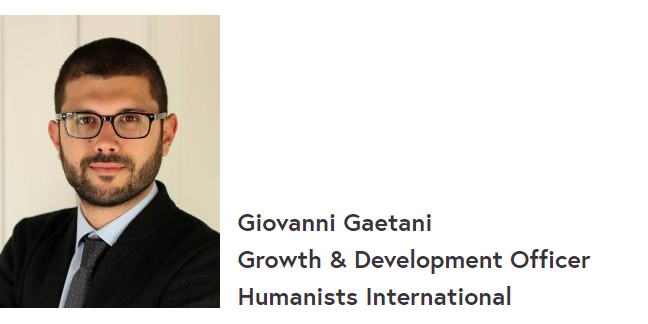 One effective way to look at the global humanist movement is to imagine it as a spectrum.

In the middle of the spectrum are organisations who are working for secularism in countries where the lines between church and state are blurred. Their campaigns will include attempts to remove religious privilege, particularly in the education system, and to have humanism recognised as a legitimate part of society. In Italy, Spain, and Portugal, for example, one can openly be atheist (despite a certain degree of moral stigmatisation). Nonetheless the separation of church and state still has to be achieved, and that is what humanist organisations in those countries are campaigning for.

If we look towards the bottom of the spectrum we will find humanist organisations that are illegal and are simply battling for the right to exist. The Humanist Association of Nigeria, for example, took seventeen years to be recognised by the state as a legitimate organisation, and atheists in Kenya were unable to get state recognition on the basis that their registration could affect ‘peace… [and] good order’ in the country.

At the very bottom of the spectrum are those countries in which we find individual humanists who are simply struggling to survive because admitting they are not religious would put their liberty and lives at risk.

Freedom of religion and belief

The United Nations Declaration of Human Rights guarantees human beings freedom of belief and freedom of expression. Humanists believe these freedoms are important for both society as a whole and for individuals. Freedom of expression is essential for progress. Breakthroughs in knowledge and understanding become possible when individuals are able to challenge the consensus and promote new ideas. These freedoms are also necessary to enable all people to live flourishing lives, free from persecution.

However, in many parts of the world people are denied these rights. In 71 countries blasphemy is a crime; in 7 it is punishable by death. In 18 countries one can be punished for rejecting or leaving the state religion (apostasy); in 12 of them the punishment is death.

Campaigning by humanist organisations around the world will typically focus on promoting secularism and human rights. They will seek to remove religious privilege where it exists and work to ensure the separation of religion and state. This will include campaigning for the human right to freedom of religion and belief, and against the existence of blasphemy and apostasy laws.

However, humanist organisations are also involved in a wide number of projects aimed at improving equality and opportunity. These include humanitarian work, providing education services, supporting the rights of women and LGBT people, and campaigning against harmful traditional practices.