Deployment with Puppet and Configuration Management by Ansible

Deploying a virtual machine (VM) managed by Puppet and managing configuration with Ansible should be no challenge to you now that you can configure a VM with Chef.

Although the language and frameworks are different, the principle is still based on DSC.

Deploying a VM Managed by Puppet

Puppet is another open-source tool that allows you to apply DevOps Infrastructure as Code practices to manage your cloud apps.

You can install puppet via the Azure Marketplace (search for Puppet Enterprise 2016.1 Template). Then, create the template by using the Azure dashboard to set the parameters of the VM.

After you designate the parameters, a preconfigured system will run and test Puppet. Many settings will be preset but can be changed as needed. The VM will then be created and Puppet will run install scripts.

You can connect hundreds of agents to one Puppet master. The Azure Resource Manager Template Visualiser tool can help you to visualise your network.

After configuring and deploying the network, you can manage it like a Puppet cluster. For more details, see the Puppet white paper: Getting Started: Deploying Puppet Enterprise in Microsoft Azure.

Ansible is an open-source platform that automates cloud provisioning, configuration management, and app deployment, amongst other tasks.

Configuration management tools use declarative language to configure a machine or group of machines by using playbooks, and then assuring that the machines are configured correctly. Playbooks are the language of Ansible’s configurations, deployments, and orchestrations.

They can be used to manage configurations of and deployments to remote machines. Playbooks are structured with YAML (a data serialisation language) and support variables.

Ansible is designed for multitier deployments and is agent-less, unlike Puppet or Chef, so you don’t have to install any software on the managed machines. To manage Linux machines, Ansible uses Secure Shell (SSH) and, for Windows machines, remote PowerShell is used. Ansible uses modules to interact with the Azure portal. For Azure, Ansible supports dynamic inventories (it supports host inventories for other managed hosts), which means that the host inventory is dynamically generated at runtime. 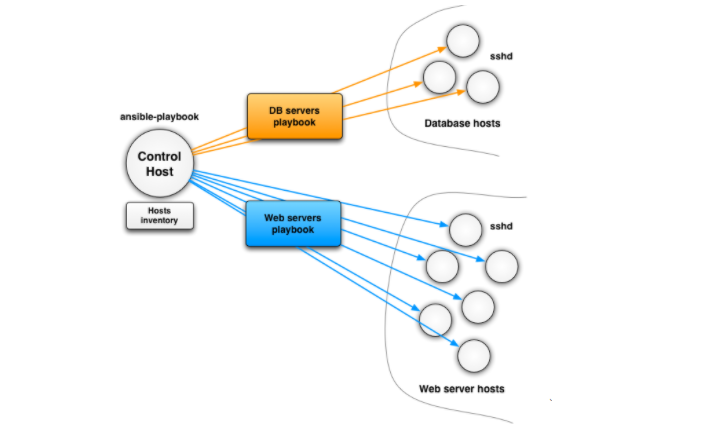 (Diagram is taken from github repository of user erjosito)

NOTE: There’s a lab at the end of this activity for Creating VMs and Configuration Management with Ansible which you can complete for further insight.

In this section, we explored automation resources for IaC. Which resource would you use to deploy and manage your VMs with, and why?

Use the Discussion section below and let us know your thoughts. Try to respond to at least one other post and once you’re happy with your contribution, click the Mark as complete button to move on to the next step.