Runbooks in Azure Automation might not have access to resources in other clouds or in your on-premises environment because they run on the Azure cloud platform.

The video in this step demonstrates how to implement the Automation DSC platform to platform, and in this instance for AWS VMs. You will learn how to make the AWS VMs discoverable within the Azure Portal by running PowerShell scripts on target machines in Amazon. You will be applying DSC configurations on AWS VMs by leveraging the Azure Automation tool kit.

The information below will help you understand how to manage a hybrid unit.

The Hybrid Runbook Worker feature of Azure Automation allows you to run runbooks on machines located in your datacentre to manage local resources. The runbooks are stored and managed in Azure Automation and then delivered to one or more on-premise machines: 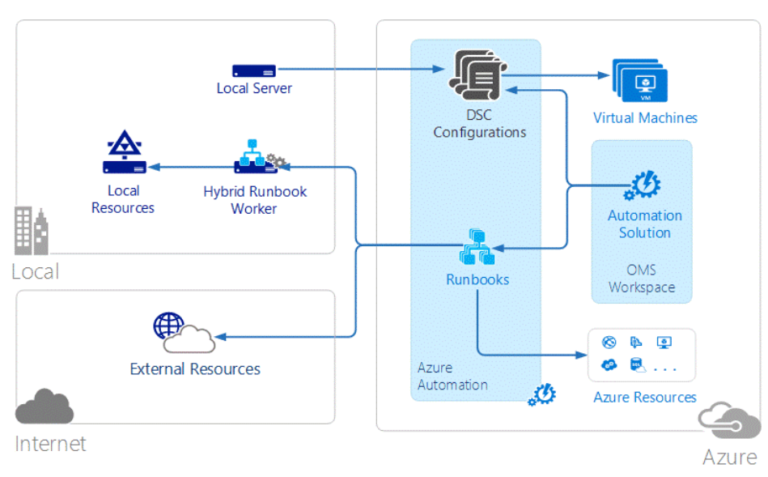 There are no inbound firewall requirements to support Hybrid Runbook Workers. Only TCP 443 is required for outbound internet access. The agent on the local computer initiates all communication with Azure Automation in the cloud. When a runbook is started, Azure Automation creates an instruction that is retrieved by the agent. The agent then pulls down the runbook and any parameters before running it. It will also retrieve any assets that are used by the runbook from Azure Automation.

To manage the configuration of your servers that support the Hybrid Runbook Worker role with Desired State Configuration (DSC), you must add them as DSC nodes.

When you start a runbook on a Hybrid Runbook Worker, you specify the group that it will run on. The members of the group will determine which worker will service the request. You cannot specify a specific worker.

The last two steps demonstrated how you can manage Azure IaaS and AWS VMs with Automation DSC. Consider the context and automation in your environment. How would you benefit from implementing Automation DSC in your environment? Share your ideas with the group.
Use the Discussion section below and let us know your thoughts. Try to respond to at least one other post and once you’re happy with your contribution, click the Mark as complete button to move on to the next step.