What are bacteria? In this article we look at bacteria and how they differ from other forms of life at the cellular level
© Wellcome Genome Campus Advanced Courses and Scientific Conferences

Bacteria are microscopic, single-celled organisms that exist in their millions, in every environment, both inside and outside other organisms. The vast majority of the bacteria in the body are rendered harmless by the protective effects of the immune system and many are beneficial, particularly in our digestive system. However, several species of bacteria are pathogenic and cause infectious diseases, including cholera, tuberculosis, and chlamydia.

Before we learn more about disease-causing (pathogenic) bacteria, we will take a look at the features of a typical bacterium. 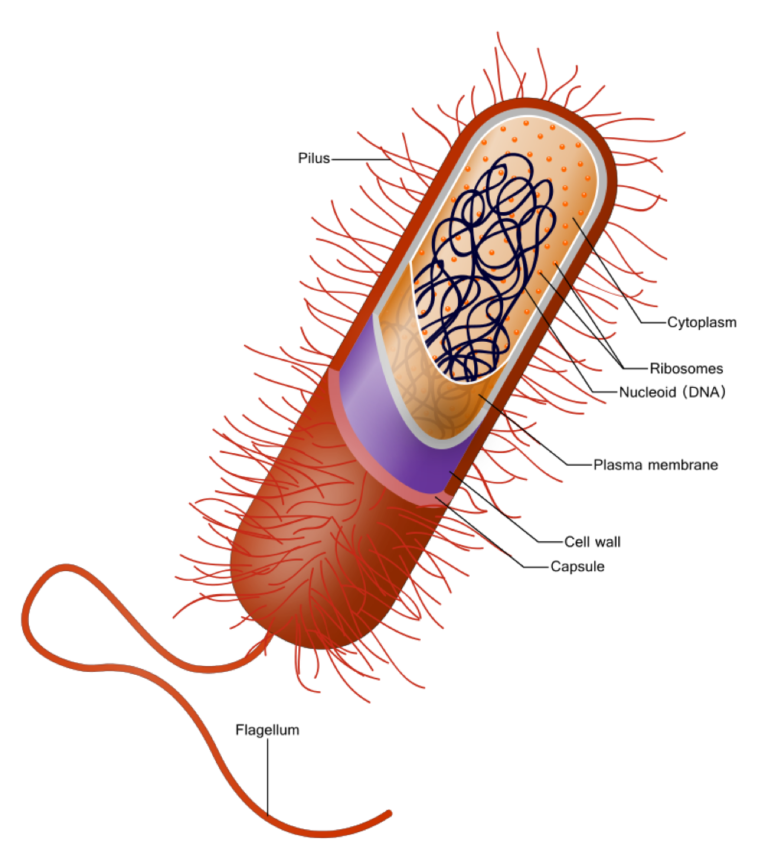 Some but not all bacterial cells have one or more flagella for movement, an outer capsule layer and pili – hair-like appendages that help them stick to surfaces. These allow bacteria to transfer genetic material to other cells, a mechanism that can contribute to the spread of disease.

The majority of bacteria have a cell wall that gives the bacteria its shape, an inner permeable plasma membrane that substances can pass through, and a gelatinous substance known as cytoplasm. Floating freely in the cytoplasm is what we are interested in, the genetic material or DNA, contained in a circular molecule called the chromosome. This contains all the genetic instructions used in the development and function of the bacterium. Plasmids (additional genetic material) may also be present (not shown here). These are small, circular DNA molecules that can be passed between bacteria and can encode genes that enable bacteria to become resistant to antibiotics.

Pathogenic Gram positive bacteria and the infections they cause include:

Pathogenic Gram negative bacteria and the infections they cause include:

Unfortunately, some important human pathogens cannot be reliably detected using this approach. Mycobacterium tuberculosis, which causes tuberculosis and Mycobacterium leprae, which causes leprosy, ought to be Gram positive. However, they have ‘fatty’ cell walls which do not retain the Gram stain. Furthermore, although useful in some cases, Gram staining is often not specific about whether a particular infection can be treated with any particular antibiotic. Bacteria from the same species can be susceptible to different antibiotics.

Fortunately, new approaches are now available to identify bacteria that are much more accurate. During this course, you will learn how genome sequencing can be used to very accurately identify the bacteria that cause a disease. Not only can it distinguish very different types of bacteria, such as Gram positive vs. Gram negative, but it can also distinguish bacteria from the same species in different patients. This means it can be used to track the spread of bacteria between people. Genome sequencing also helps us to determine the causes of antibiotic resistance and can be used to tailor antibiotic treatment to specific infections. This will help to reduce the spread of antibiotic resistance.