Find out more
Home / IT & Computer Science / Business Technology / Introduction to Blockchain Technology and Applications / Is DeFi the killer application for blockchain technology?

Is DeFi the killer application for blockchain technology?

This article discussed whether DeFi is the killer application for blockchain technology.

Cryptocurrencies have been the first application of blockchain technology. Bitcoin was created as a new form of money that did not rely on any trust in a central/third party to ensure its functioning. As blockchain 1.0, Bitcoin is still the most used and dominant form of blockchain technology. Although to date, its use case as a form of new money has not come to fruition (despite its adoption as a form of money in some countries such as El Salvador) [1], its use as a technology in a multitude of industries and use cases such as in supply chain, in law, and with identity has seen progress. This has come by adopting newer blockchain technologies, primarily blockchain 2.0 fuelled by Ethereum and smart contracts.

Recently, blockchain’s impact in financial services, with new financial products, has gained a renewed momentum. This has been through what is called the decentralised finance, or DeFi movement. DeFi utilises blockchain 2.0 and blockchain 3.0, which include blockchain and Distributed Ledger Technologies such as Hedera Hashgraph, Avalanche and Solana, and their properties to create financial products that have decentralisation at their heart. 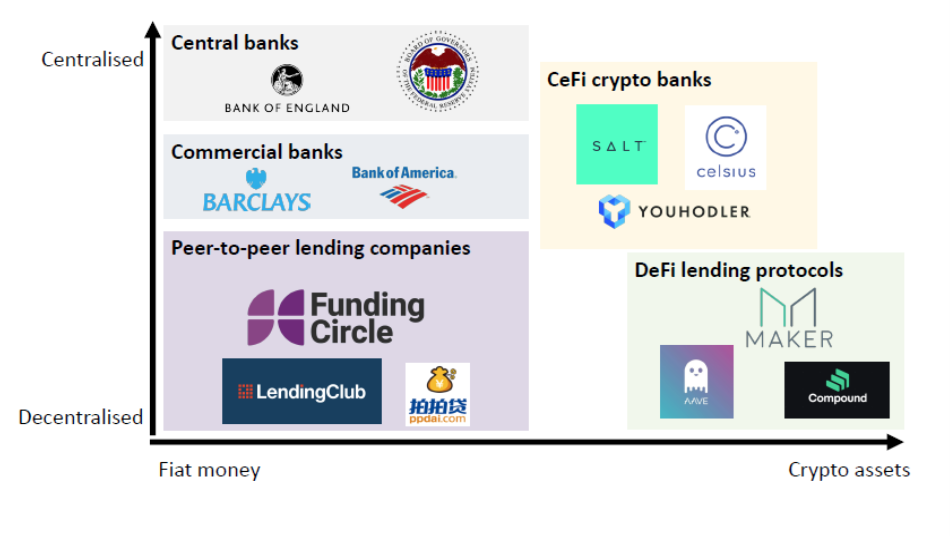 DeFi aims to create a new class of financial products that improve centralised finance — removing intermediaries, enhancing efficiency, lowering cost, and ultimately empowering users. The DeFi movement has grown in terms of financial assets involved with these new decentralised financial products from almost nothing in 2017, to nearly USD 100 billion in 2021. [3] These assets have been used in a multitude of new DeFi products. The interest in DeFi is currently driving growth in blockchain and cryptocurrencies. It could be thought of as a potential killer application of blockchain.

In the rest of this article, we’ll look at some DeFi use cases, including decentralised lending, exchanges, insurance and derivatives solutions, as well as Non-Fungible Tokens (NFTs).

Decentralised lending: Centralised lending has problems with financial inclusion. Those with thin files (not enough credit records) are often excluded from participation in lending markets. There are also passthrough issues where lending measures initiated by the government and central banks are not relayed via intermediary commercial banks to end-users effectively. Finally, the use of legacy infrastructure means centralised lenders are inefficient and prevalent to abuses that increase overall lending costs. Decentralised lending platforms, such as
Compound seek to mitigate many problems with centralised lending by offering transparent, automatic, and fairer lending services in cryptoassets. With the Compound platform, users can deposit collateral in crypto to be lent other cryptoassets with the entire operation automated by smart contracts. The Compound platform has approximately USD 20 billion of cryptoassets available to borrow. [4] Lending rates are attractive, with, for example, lenders of USDC (a USD stablecoin) earning approximately 3% [5] — far greater than rates earned by savers for USD fiat currency.

Decentralised exchanges: Centralised exchanges do not usually facilitate their transactions on-chain and have liquidity providers that could manipulate their markets and indeed are only as strong as their centralised security measures. On the other hand, decentralised exchanges (DEXs) facilitate automated trading on the blockchain through automated market maker mechanisms. DEXs are automated, completely open to any cryptoasset holders and can be more efficient for trading certain products that traditional exchanges may not provide liquidity for. Uniswap is an example of a DEX with over USD 350 billion trade volume, over 1.5 million users, and has facilitated over 61 million trades since it started.[6]

Decentralised insurance: Nexus Mutual is a blockchain-based insurance platform. Users can get cover against smart contract failure and hacks. Decentralised insurance platforms seek to offer new kinds of protection against risks from new emerging technologies, provide transparency on their policies and claims assessment, utilise smart contracts for a better and more seamless user experience and also enable those who are insured to trade their policies rather than them being locked in. Nexus Mutual has nearly USD 500 million of active cover, with nearly USD 15 million of premiums-in-force. Out of 95 claims that have gone through the platform, 18 have been approved, and nearly USD 5 million has been paid out. [7]

NFTs are digital representations of real-world or digital assets that cannot be split into smaller parts. NFTs confer ownership of real-world assets, such as art or real estate, and can also represent digital art or virtual game assets as well. Instead of relying on a central or third party to maintain an ownership ledger, NFT ownership is tracked via the blockchain. NFTs have become popular recently, with Christie’s selling an NFT digital art piece called “Everydays — The First 5000 days” by the artist Beeple for USD 69 million in March 2021. NFTs are also traded in virtual games such as Decentraland, where users can purchase in-game assets and virtual land. DeFi products are young and immature. The pace of experimentation and growth is unparalleled compared to any other area where blockchain technology is being applied. As more interest from institutional players grows in DeFi, this area will surely grow further and faster and bridge the gap into more traditional centralised financial products.

1. Why has El Salvador Officially Adopted Bitcoin as its Currency. Available from: https://www.newscientist.com/ [cited 10 September 2021].